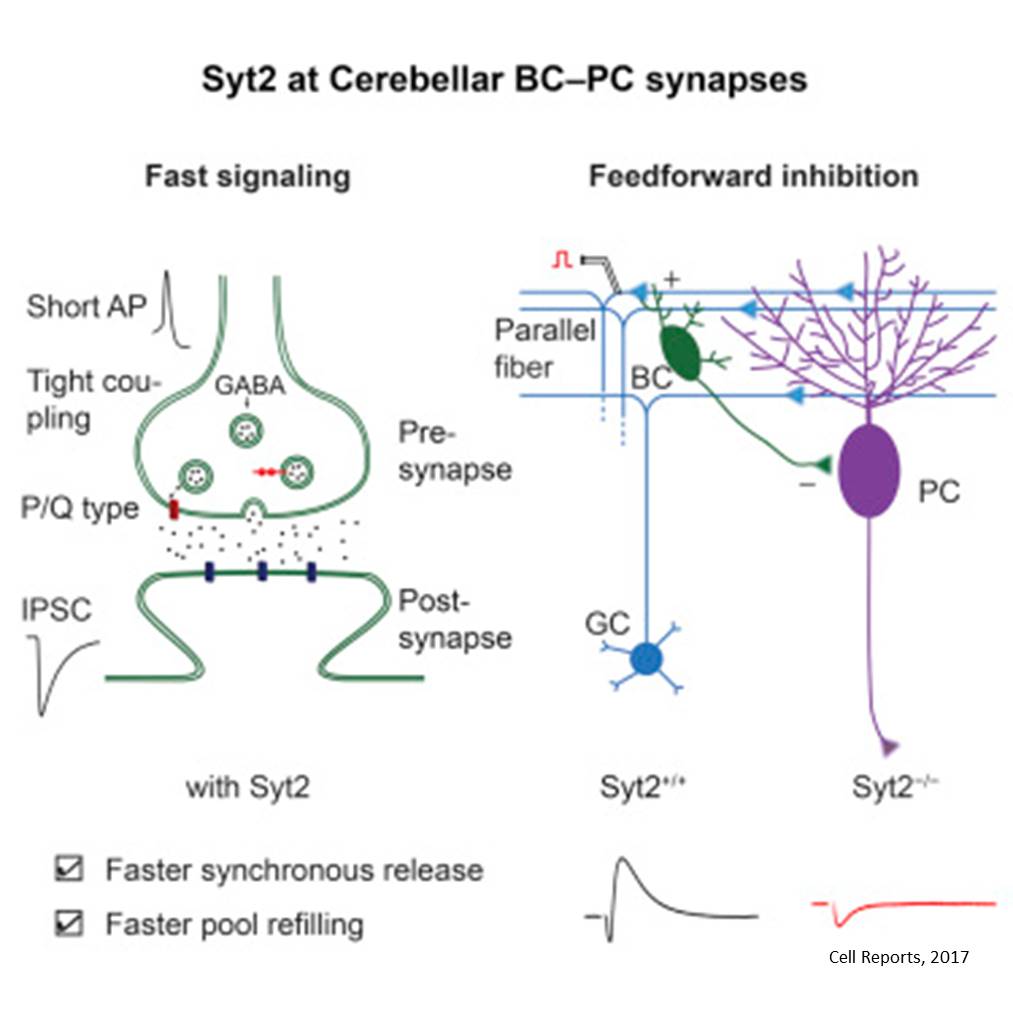 Synapses, the connections between neurons, come in different flavors, depending on the chemical they use as transmitter. Signal transmitters, or neurotransmitters, are released at the synapse after calcium ions flow into the neuron. The type of synapses that use a signal transmitter called GABA - the GABAergic synapses -- stand out because of their speed and precision. But the secret behind their speed was not fully known until now, and neither was the sensor they use to detect the inflowing calcium.

Both questions were solved in a study published in Cell Reports. Researchers find that GABAergic synapses achieve their remarkable signalling speed and reliability partly because of the sensor they use to measure the amount of calcium in the neuron, and that synaptotagmin 2 is the major calcium sensor in this kind of synapses. "We have, for the first time, identified the calcium sensor that triggers neurotransmitter release at an inhibitory synapse", summarizes senior author.

Interneurons that use GABA as neurotransmitter play a key role in controlling activity in neuronal microcircuits. In all brain regions and species, the hallmark of these GABAergic interneurons is their signalling speed: the delay between stimulation and response lies in the submillisecond range. The team asked whether the calcium sensor that triggers neurotransmitter release contributes to this speed. In their study, they investigate the synapse between basket cells and Purkinje cells. This major inhibitory synapse is located in the cerebellum, a brain region that plays an important role in motor control.

At the same time, synaptotagmin 2 also causes a faster refilling of vesicles with neurotransmitter, so that the neuron is ready to send another signal more quickly. This has important consequences for the function of GABAergic interneurons, explains senior auhtor "Using synaptotagmin 2 is one reason why GABAergic synapses send signals so fast. Synaptotagmin 2 may control the speed of inhibition in microcircuits, and allow GABAergic synapses to maintain their output by quickly replenishing the pool of neurotransmitter."

Micro-spectrometer in your smart phone?