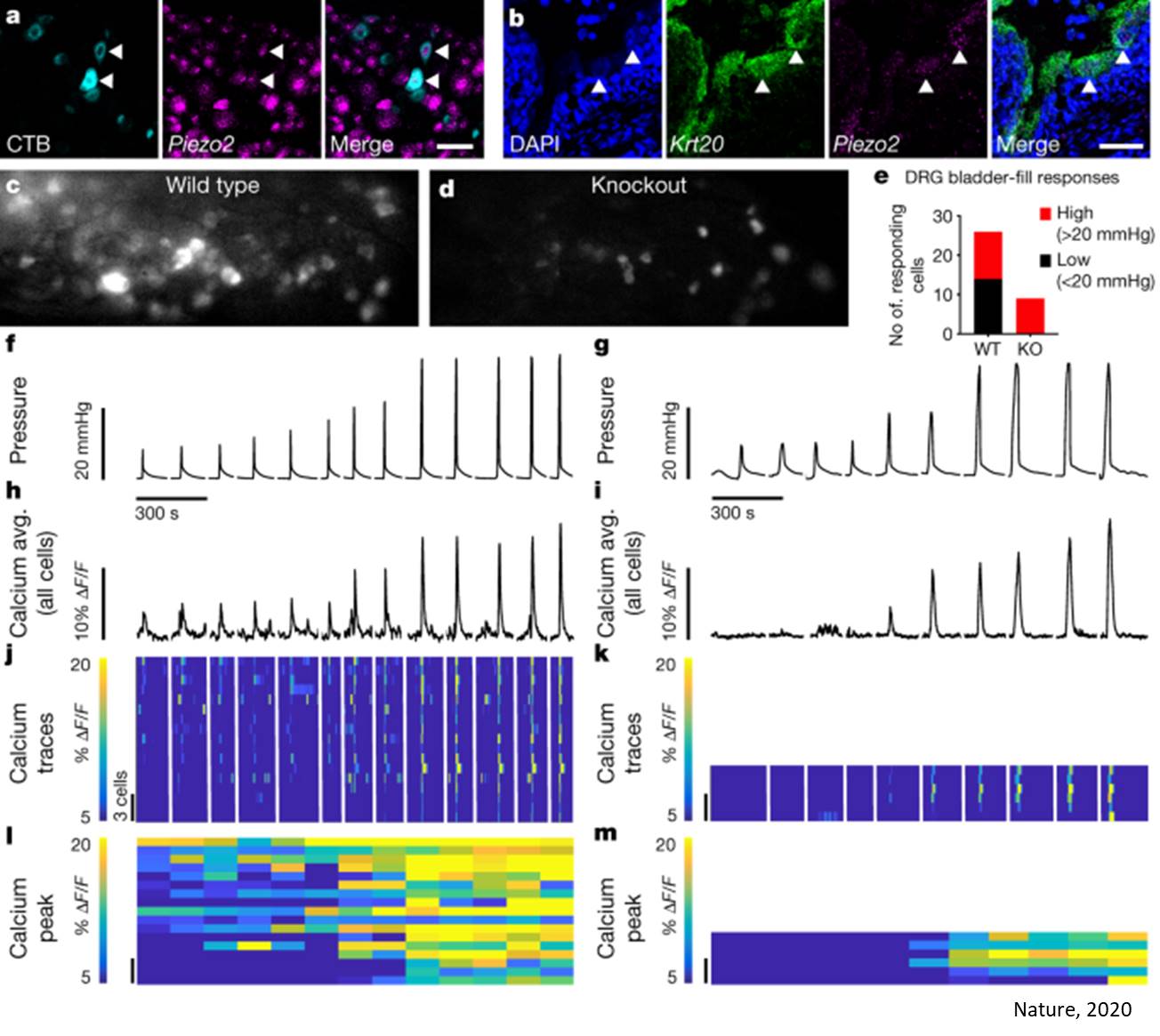 A research team has found that the main sensor protein enabling our sense of touch also underlies the feeling of having a full bladder and makes normal bladder function possible.

The discovery, published in Nature, marks a key advance in basic neurobiology and may also lead to better treatments for bladder control and urination problems, which are common especially among the elderly.

"We tend to take urination for granted, and it has been under-studied, yet it's a huge burden when something goes wrong with this system," says the study's lead author. "Now we've identified a crucial part of how urination normally works."

The authors focused in this study on the PIEZO2 protein, a "mechanosensor" that detects the physical stretching of tissues where it resides. They found that PIEZO2 is expressed in cells of the bladder and is necessary for normal urinary continence and functioning in both mice and humans.

"Who would have imagined that the same mechanosensor protein enabling our sense of touch also alerts us that our bladder is full?" says co-senior author.

Like most sensor proteins, the PIEZOs are ion-channel proteins, which are embedded in their host cell's outer membrane and, when triggered by a stimulus, allow a flow of charged atoms into the cell. Sensor ion-channel proteins are usually found in sensory neurons in the skin, joints and other organs. On a given neuron, when enough of these channels open to admit ion flows, the neuron will fire a nerve signal to the brain.

For PIEZOs, the stimulus that triggers the opening of the ion channel is the stretching of the cell membrane due to mechanical forces on the local tissue. In studies over the past decade, the authors have shown that PIEZO2 is expressed is different organs and tissues throughout the body. For example, they exist in lung tissues to sense lung stretch and help regulate breathing, in blood vessels to sense blood pressure and in the skin to mediate the sense of touch.

For the study, investigators found that these PIEZO2-deficient individuals, in addition to their other sensory deficits, lack the normal sense of having a full bladder. They typically urinate on a schedule to avoid incontinence and have trouble completely emptying their bladder when they do urinate.

The authors showed in experiments that the loss of PIEZO2 has similar effects in mice. The urinary tract uses PIEZO2 protein in both bladder sensory neurons and in bladder-lining cells called umbrella cells to detect stretch and facilitate urination, indicating a two-part sensor system. As they determined in experiments, bladder neurons in mice normally respond robustly with nerve signals when the bladder is filled but are almost completely silent during bladder filling if they lack PIEZO2.

The mice lacking PIEZO2 in their lower urinary tracts also showed abnormal urination reflexes in the muscles controlling the urethra, the duct in which urine flows from the bladder. That suggests that in mice and most likely in people, the mechanosensor protein is needed both for normal bladder-stretch sensation and for normal urination.

The team is currently following up with research on the distinct roles of bladder neurons and umbrella cells, and how they signal to each other. They are also investigating the possible roles of other mechanosensors, such as PIEZO1, in bladder control and urination.

"Mice without PIEZO2 had clear urination deficits, but ultimately were still able to urinate, so that suggests another mechanosensory protein may be involved," the author says.