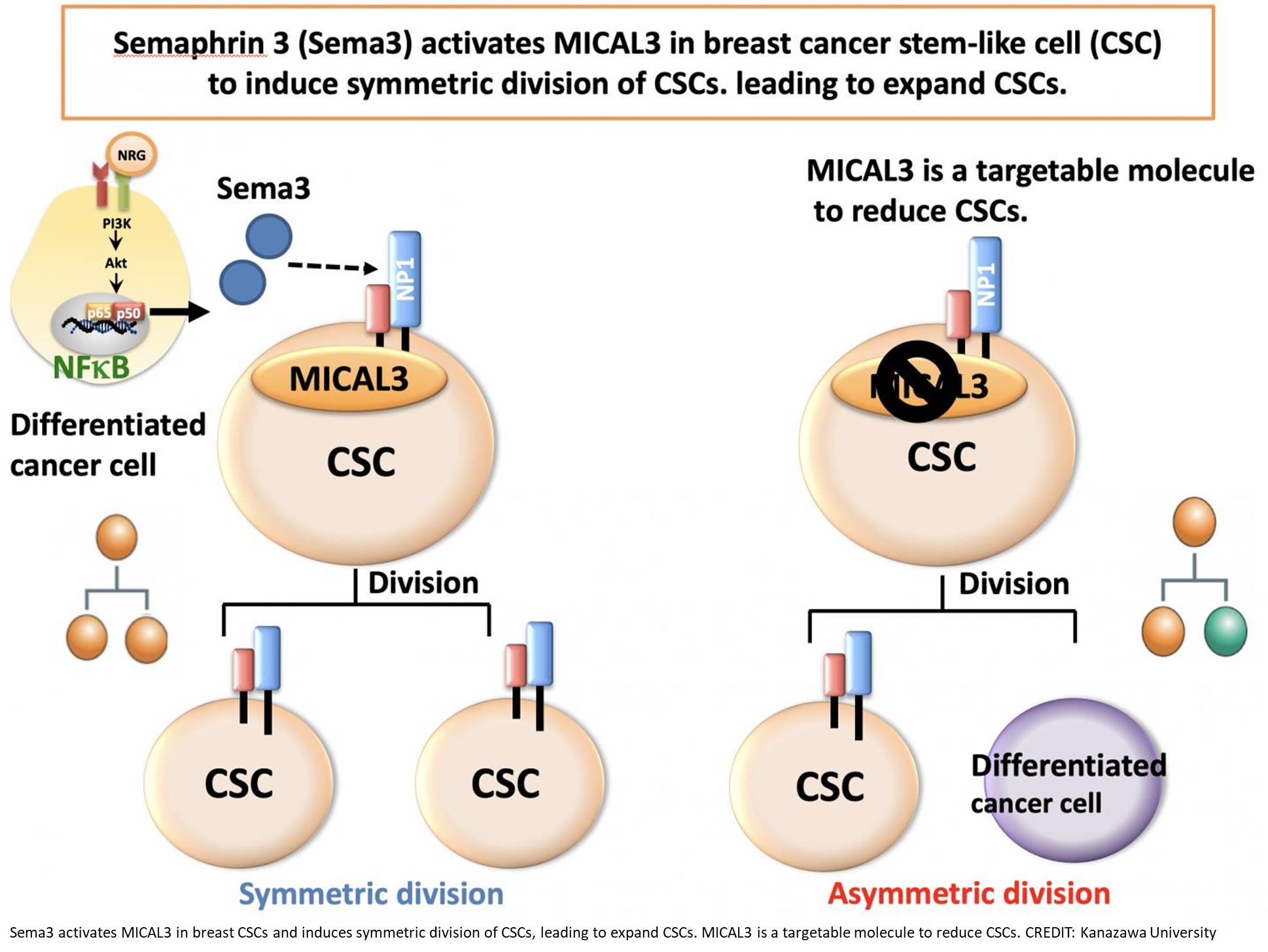 In breast cancer, one of the most common cancers in women, tumors contain a small amount of so-called cancer stem-like cells (CSCs). Being able to eliminate breast-cancer stem-like cells in a targeted way is essential for developing successful therapies -- conventional treatments, such as chemotherapy or radiotherapy followed by drug intake, do not target CSCs. A better understanding of the processes generating CSCs in breast-cancer tumors is needed. Researchers have now uncovered a signaling pathway directly related to the proliferation of CSCs in breast cancer.

A property of stem cells is that they can self-renew and differentiate. Two types of stem-cell division can occur: symmetric or asymmetric. In the former, two self-renewing stem cells are generated; in the latter, only one (and a differentiated cell). It is now believed that malignant CSCs have a higher tendency to divide symmetrically, thus increasing the number of CSCs. Researchers looked at how the microenvironment of CSCs, called the CSC niche, causes and sustains an increased rate of symmetric division.

The researchers started from the observation that a particular gene encoding a type of cytokine known as Semaphorin 3 (Sema3) was one of the most-expressed genes in the CSC niche. (Cytokines are small proteins that, when released, affect the behavior of cells around them.) The production of Sema3 activates another protein, called MICAL3, the expression levels of which were also found to be high in the CSC niche.

Via a series of experiments in vitro, the authors were able to confirm the critical roles of Sema3 and MICAL3 in breast cancer tumor development. Specifically, MICAL3 was shown to be required for tumor sphere formation (tumorigenicity is associated with spherical cell shapes). The scientists showed that Sema3-stimulated MICAL3 triggered a whole sequence of biomolecular interactions (a signaling pathway), ultimately resulting in induced symmetric division of CSCs, and hence their proliferation, in breast cancer.

Having established this important pathway is highly relevant for developing treatments for breast cancer, because, quoting the researchers, "by inhibition of MICAL3 ... or knockdown of each component in the signaling pathway, the symmetric cell division may be inhibited, leading to a reduction of breast-cancer stem-like cells."