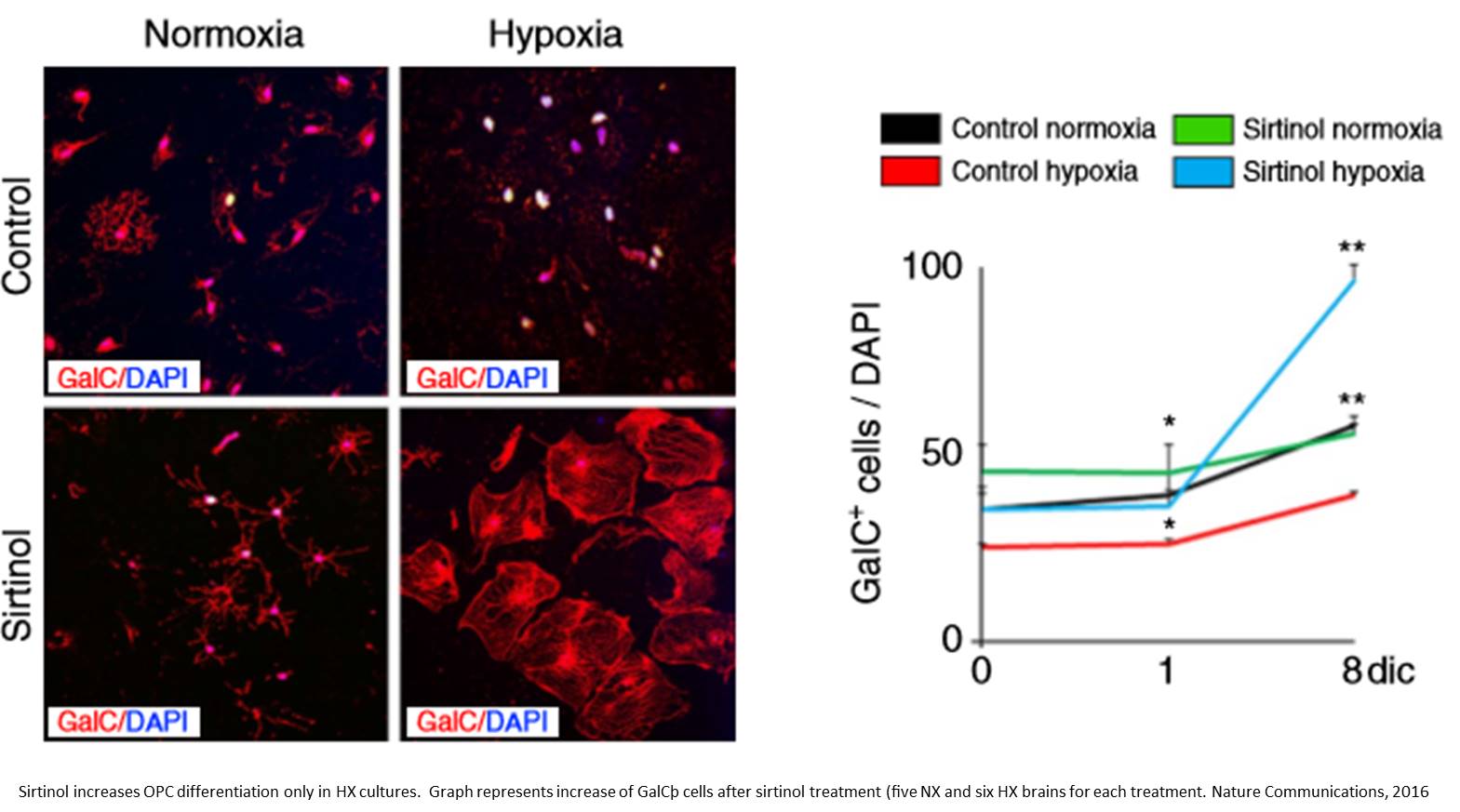 Developing brains in newborns have a sizable pool of a certain type of immature progenitor cell that can be expanded and induced to replace cells lost to brain injury. In a pre-clinical model of premature brain injury, the sirtuin protein Sirt1 plays a crucial role in regenerating glial cells from endogenous progenitor cells after hypoxia-related brain injury suffered by preemies, a research team reports in Nature Communications.

"It is not a cure. But, in order to regenerate the white matter that is lost or damaged, the first steps are to identify endogenous cells capable of regenerating lost cells and then to expand their pool. The glial progenitor cells represent 4 to 5 percent of total brain cells," says senior author of the study. "It's a sizable pool, considering that the brain is made up of billions of cells. The advantage is that these progenitor cells are already there, with no requirement to slip them through the blood-brain barrier. Eventually they will differentiate into oligodendrocyte cells in white matter, mature glia, and that's exactly what we want them to do."

The study team identified Sirt1 as a novel, major regulator of basal oligodendrocyte progenitor cell (OPC) proliferation and regeneration in response to hypoxia in neonatal white matter, authors write. "We demonstrate that Sirt1 deacetylates and activates Cdk2, a kinase which controls OPC expansion. We also elucidate the mechanism by which Sirt1 targets other individual members of the Cdk2 signaling pathway, by regulating their deacetylation, complex formation and E2F1 release, molecular events which drive Cdk2-mediated OPC proliferation," says a study co-author.
Hypoxia-induced brain injury in neonates initiates spontaneous amplification of progenitor cells but also causes a deficiency of mature oligodendrocytes. Inhibiting Sirt1 expression in vitro and in vivo showed that loss of its deacetylase activity prevents OPC proliferation in hypoxia while promoting oligodendrocyte maturation - which underscores the importance of Sirt1 activity in maintaining the delicate balance between these two processes.

The tantalizing findings - the result of four years of research work in mouse models of neonatal hypoxia - hint at the prospect of lessening the severity of developmental delays experienced by the majority of preemies, author adds. About 1 in 10 infants born in the United States are delivered preterm, prior to the 37th gestational week of pregnancy, according to the Centers for Disease Control and Prevention. Brain injury associated with preterm birth - including white matter injury - can have long-term cognitive and behavioral consequences, with more than 50 percent of infants who survive prematurity needing special education, behavioral intervention and pharmacological treatment, author says.

Time is of the essence, since Sirt1 plays a beneficial role at a certain place (white matter) and at a specific time (while the immature brain continues to develop). "We see maximal Sirt1 expression and activity within the first week after neonatal brain injury. There is a very narrow window in which to harness the stimulus that amplifies the progenitor cell population and target this particular molecule for repair," author says.

Sirt1, a nicotinamide adenine dinucleotide-dependent class III histone deacetylase, is known to be involved in normal cell development, aging, inflammatory responses, energy metabolism and calorie restriction, the study team reports. Its activity can be modulated by sirtinol, an off-the-shelf drug that inhibits sirtuin proteins. The finding points to the potential for therapeutic interventions for diffuse white matter injury in neonates.

Next, the research team aims to study these processes in a large animal model whose brains are structurally, anatomically and metabolically similar to the human brain.