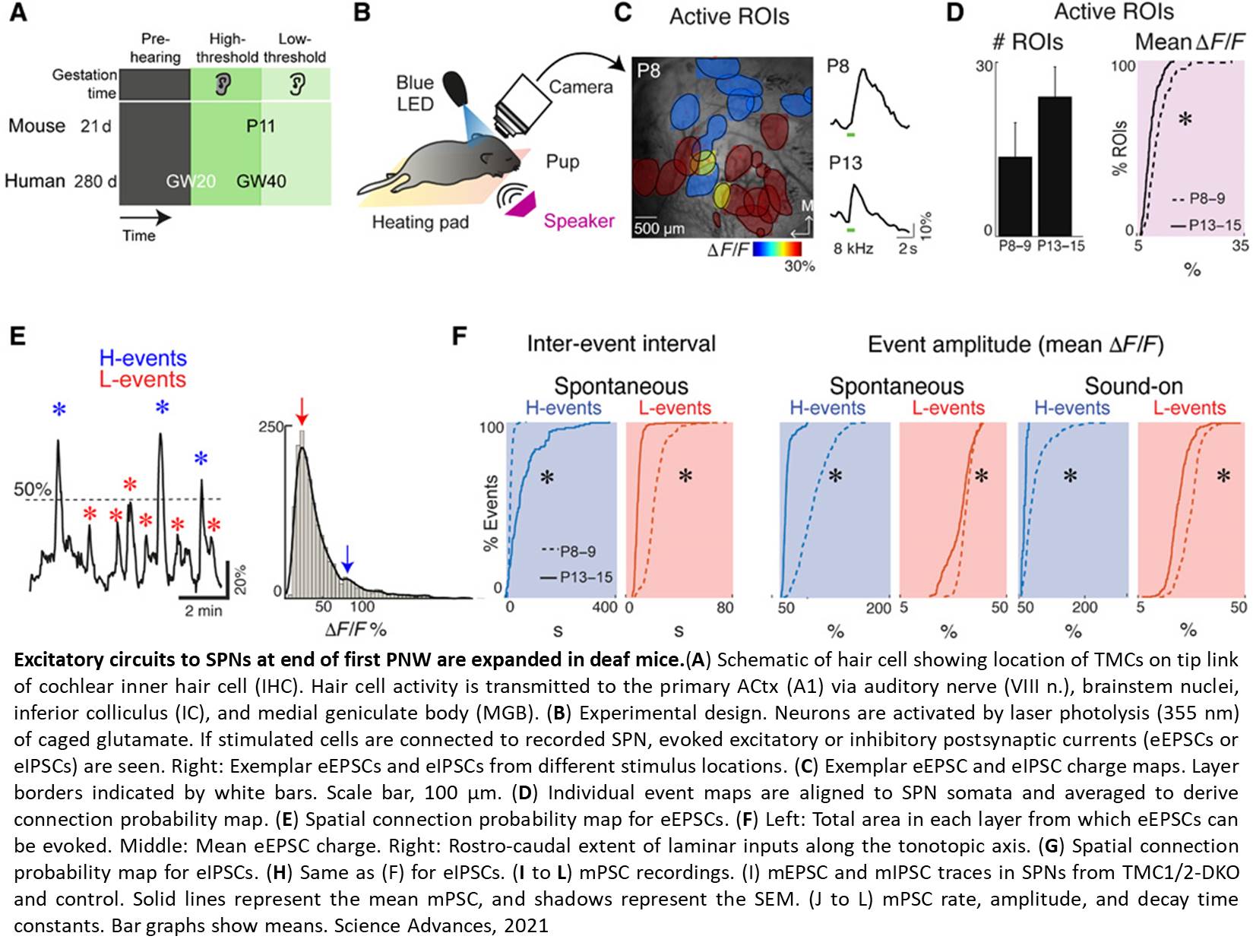 Scientists have yet to answer the age-old question of whether or how sound shapes the minds of fetuses in the womb, and expectant mothers often wonder about the benefits of such activities as playing music during pregnancy. Now, in experiments in newborn mice, scientists report that sounds appear to change "wiring" patterns in areas of the brain that process sound earlier than scientists assumed and even before the ear canal opens.

The current experiments involve newborn mice, which have ear canals that open 11 days after birth. In human fetuses, the ear canal opens prenatally, at about 20 weeks gestation.

The findings, published in Science Advances, may eventually help scientists identify ways to detect and intervene in abnormal wiring in the brain that may cause hearing or other sensory problems.

"As scientists, we are looking for answers to basic questions about how we become who we are," says the senior author. "Specifically, I am looking at how our sensory environment shapes us and how early in fetal development this starts happening."

In development, the white matter also contains so-called subplate neurons, some of the first to develop in the brain -- at about 12 weeks gestation for humans and the second embryonic week in mice. These primordial subplate neurons eventually die off during development in mammals, including mice. In humans, this happens shortly before birth through the first few months of life. But before they die off, they make connections between a key gateway in the brain for all sensory information, the thalamus, and the middle layers of the cortex.

"The thalamus is the intermediary of information from the eyes, ears and skin into the cortex," says the author. "When things go wrong in the thalamus or its connections with the cortex, neurodevelopmental problems occur." In adults, the neurons in the thalamus stretch out and project long, arm like structures called axons to the middle layers of the cortex, but in fetal development, subplate neurons sit between the thalamus and cortex, acting as a bridge. At the end of the axons is a nexus for communication between neurons called synapses. Working in ferrets and mice, the author previously mapped the circuitry of subplate neurons and found that subplate neurons can receive electrical signals related to sound before any other cortical neurons did.

In the new research, first, the scientists used genetically engineered mice that lack a protein on hair cells in the inner ear. The protein is integral for transforming sound into an electric pulse that goes to the brain; from there it is translated into our perception of sound. Without the protein, the brain does not get the signal.

In the deaf, 1-week-old mice, the researchers saw about 25% - 30% more connections among subplate neurons and other cortex neurons, compared with 1-week-old mice with normal hearing and raised in a normal environment. This suggests that sounds can change brain circuits at a very young age, says the author.

In addition, say the researchers, these changes in neural connections were happening about a week earlier than typically seen. Scientists had previously assumed that sensory experience can only alter cortical circuits after neurons in the thalamus reach out to and activate the middle layers of the cortex, which in mice is around the time when their ear canals open (at around 11 days).

"When neurons are deprived of input, such as sound, the neurons reach out to find other neurons, possibly to compensate for the lack of sound," says the author. "This is happening a week earlier than we thought it would, and tells us that the lack of sound likely reorganizes connections in the immature cortex."

In the same way that lack of sound influences brain connections, the scientists thought it was possible that extra sounds could influence early neuron connections in normal hearing mice, as well.

These mice also had more diversity among the types of neural circuits that developed between the subplate and cortical neurons, compared with normal hearing mouse pups raised in a quiet enclosure with no sound. The normal hearing mice raised in the quiet enclosure also had neuron connectivity in the subplate and cortex regions similar to that of the genetically-engineered deaf mice.

"In these mice we see that the difference in early sound experience leaves a trace in the brain, and this exposure to sound may be important for neurodevelopment," says the author.

The research team is planning additional studies to determine how early exposure to sound impacts the brain later in development. Ultimately, they hope to understand how sound exposure in the womb may be important in human development and how to account for these circuit changes when fitting cochlear implants in children born deaf. They also plan to study brain signatures of premature infants and develop biomarkers for problems involving miswiring of subplate neurons.