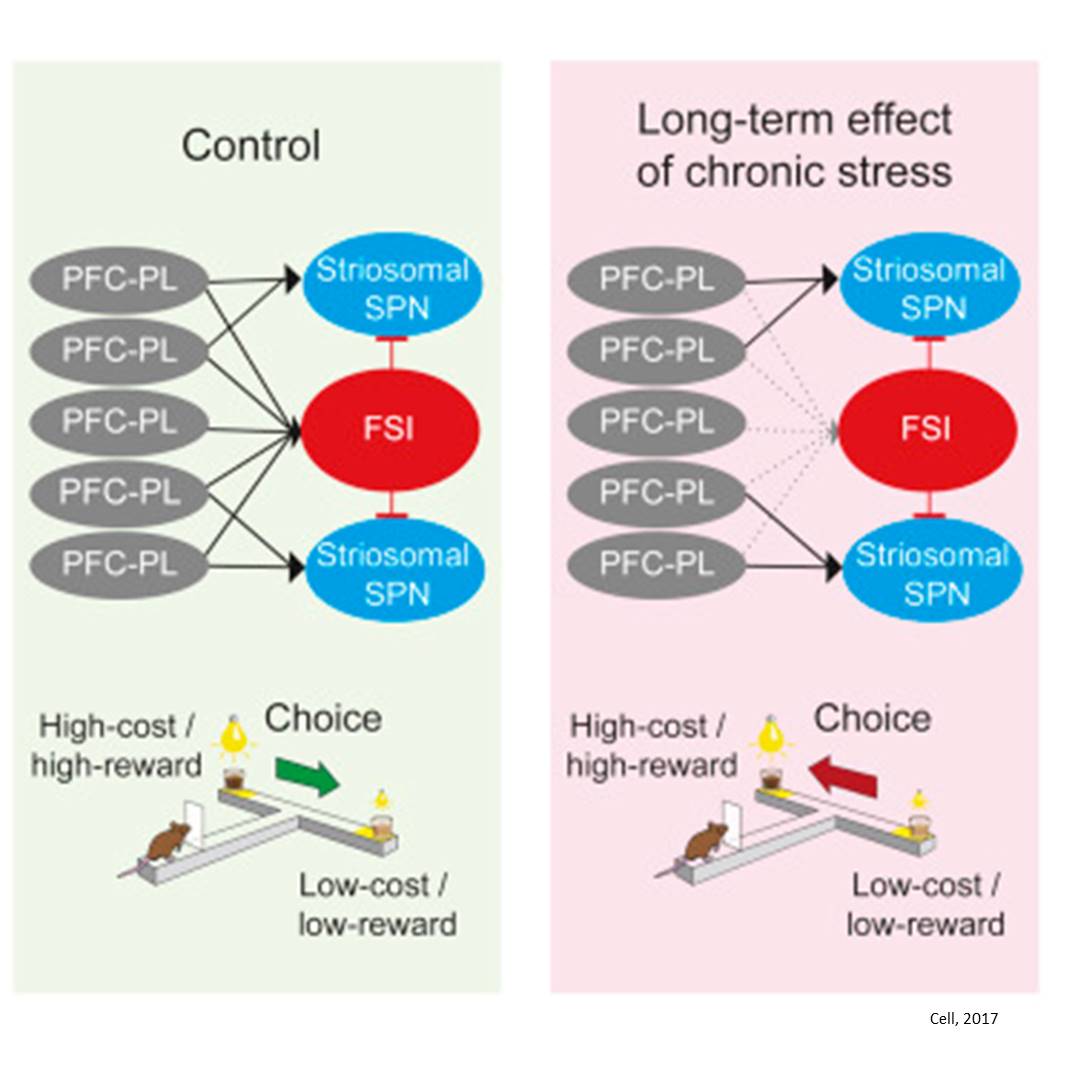 Making decisions is not always easy, especially when choosing between two options that have both positive and negative elements, such as deciding between a job with a high salary but long hours, and a lower-paying job that allows for more leisure time.

Neuroscientists have now discovered that making decisions in this type of situation, known as a cost-benefit conflict, is dramatically affected by chronic stress. In a study of mice, they found that stressed animals were far likelier to choose high-risk, high-payoff options.

The researchers also found that impairments of a specific brain circuit underlie this abnormal decision making, and they showed that they could restore normal behavior by manipulating this circuit. If a method for tuning this circuit in humans were developed, it could help patients with disorders such as depression, addiction, and anxiety, which often feature poor decision-making.

"One exciting thing is that by doing this very basic science, we found a microcircuit of neurons in the striatum that we could manipulate to reverse the effects of stress on this type of decision making. This to us is extremely promising, but we are aware that so far these experiments are in rats and mice," says the senior author of the paper, which appeared in Cell  .

In 2015, researchers first identified the brain circuit involved in decision making that involves cost-benefit conflict. The circuit begins in the medial prefrontal cortex, which is responsible for mood control, and extends into clusters of neurons called striosomes, which are located in the striatum, a region associated with habit formation, motivation, and reward reinforcement.

In that study, the researchers trained rodents to run a maze in which they had to choose between one option that included highly concentrated chocolate milk, which they like, along with bright light, which they don't, and an option with dimmer light but weaker chocolate milk. By inhibiting the connection between cortical neurons and striosomes, using a technique known as optogenetics, they found that they could transform the rodents' preference for lower-risk, lower-payoff choices to a preference for bigger payoffs despite their bigger costs.

In the new study, the researchers performed a similar experiment without optogenetic manipulations. Instead, they exposed the rodents to a short period of stress every day for two weeks.

Before experiencing stress, normal rats and mice would choose to run toward the maze arm with dimmer light and weaker chocolate milk about half the time. The researchers gradually increased the concentration of chocolate milk found in the dimmer side, and as they did so, the animals began choosing that side more frequently.

However, when chronically stressed rats and mice were put in the same situation, they continued to choose the bright light/better chocolate milk side even as the chocolate milk concentration greatly increased on the dimmer side. This was the same behavior the researchers saw in rodents that had the prefrontal cortex-striosome circuit disrupted optogenetically.

"The result is that the animal ignores the high cost and chooses the high reward," another author says.

The researchers believe that this circuit integrates information about the good and bad aspects of possible choices, helping the brain to produce a decision. Normally, when the circuit is turned on, neurons of the prefrontal cortex activate certain neurons called high-firing interneurons, which then suppress striosome activity.

When the animals are stressed, these circuit dynamics shift and the cortical neurons fire too late to inhibit the striosomes, which then become overexcited. This results in abnormal decision making.

"Somehow this prior exposure to chronic stress controls the integration of good and bad," senior author says. "It's as though the animals had lost their ability to balance excitation and inhibition in order to settle on reasonable behavior."

Once this shift occurs, it remains in effect for months, the researchers found. However, they were able to restore normal decision making in the stressed mice by using optogenetics to stimulate the high-firing interneurons, thereby suppressing the striosomes. This suggests that the prefronto-striosome circuit remains intact following chronic stress and could potentially be susceptible to manipulations that would restore normal behavior in human patients whose disorders lead to abnormal decision making.

"This state change could be reversible, and it's possible in the future that you could target these interneurons and restore the excitation-inhibition balance," author says.