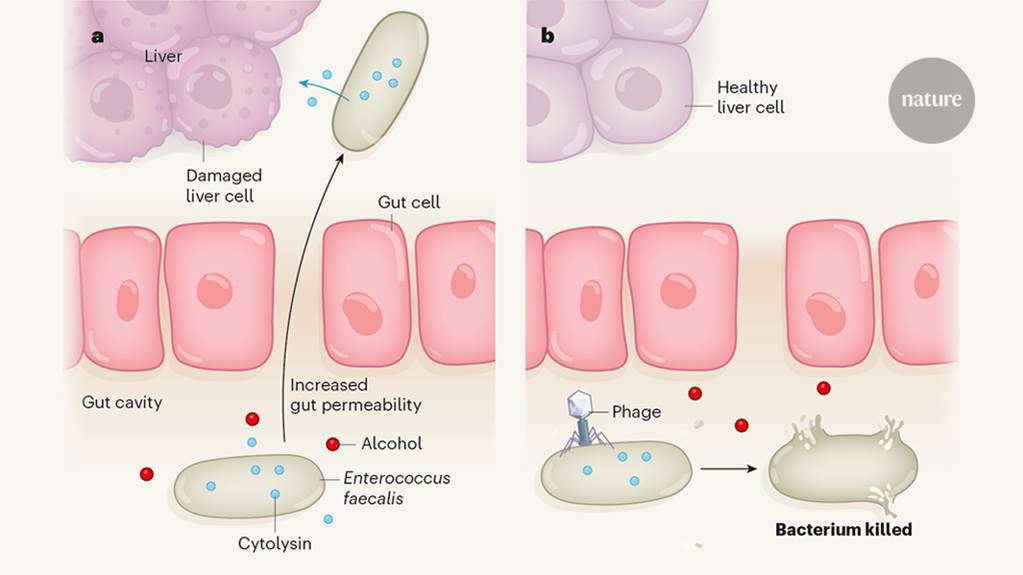 Bacteriophages (phages) are viruses that specifically destroy bacteria. In the early 20th century, researchers experimented with phages as a potential method for treating bacterial infections. But then antibiotics emerged and phages fell out of favor. With the rise of antibiotic-resistant infections, however, researchers have renewed their interest in phage therapy. In limited cases, patients with life-threatening multidrug-resistant bacterial infections have been successfully treated with experimental phage therapy after all other alternatives were exhausted.

Researchers have now for the first time successfully applied phage therapy in mice for a condition that's not considered a classic bacterial infection: alcoholic liver disease.  The study was published in Nature.

"We not only linked a specific bacterial toxin to worse clinical outcomes in patients with alcoholic liver disease, we found a way to break that link by precisely editing gut microbiota with phages," said senior author.

Up to 75 percent of patients with severe alcoholic hepatitis, the most serious form of alcohol-related liver disease, die within 90 days of diagnosis. The condition is most commonly treated with corticosteroids, but they aren't highly effective. Early liver transplantation is the only cure, but is only offered at select medical centers to a limited number of patients. In fact, there are only approximately 8,000 liver transplants for all reasons in the United States each year, according to the American Liver Foundation, with a waiting list of roughly 14,000 people.

Alcohol itself can directly damage liver cells. But the team had previously discovered that alcohol is also harmful to the liver for a second reason: It diminishes natural gut antibiotics, leaving mice more prone to bacterial growth in the liver and exacerbating alcohol-induced liver disease.

In the current study, the team -- including many collaborators around the world -- addressed two primary questions: How do gut bacteria contribute to liver damage? And can phages be used to reduce the bacteria and thus alleviate alcoholic liver disease?

"Based on this finding, we believe detection of the cytolysin-gene in feces from patients with alcoholic hepatitis could be a very good biomarker for liver disease severity and risk of death," the senior author said. "One day we might be able to select patients for tailored therapies based on their cytolysin status."

To investigate the potential for phage therapy, the researchers isolated from sewage water four different phages that specifically target cytolysin-producing E. faecalis. When they treated the mice with the targeting phages, the bacteria were eradicated and alcohol-induced liver disease was abolished. Control phages that target other bacteria or non-cytolytic E. faecalis had no effect.

"This phage therapy has only so far been tested in mice, and a clinical trial will be required to test the safety of this approach, and validate our findings in patients with alcoholic hepatitis," the senior author said.

What the age of your brain says about you

Nanoparticles can travel from lungs to blood, possibly explaining risks to heart