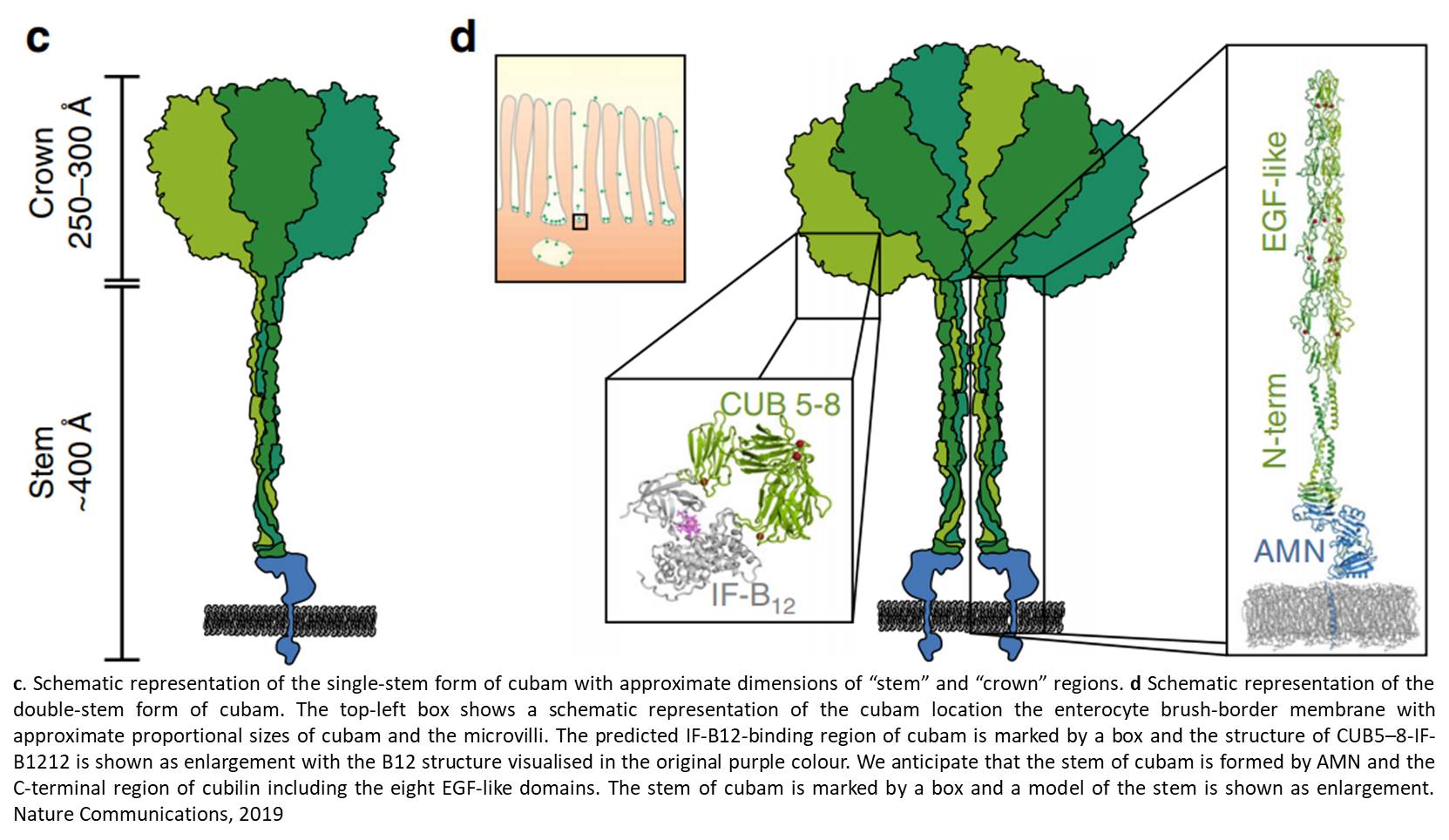 "What we're looking at is evolution at a structural level. A receptor with a toadstool structure that stems from way back and the common ancestors of insects and humans..."

A receptor that is a 'recipient' for the absorption of vitamin B12 is what he is talking about here –the senior author of the study published in Nature Communications. Vitamin B12 is the vitamin that we - even with a healthy diet - most often lack which in turn can lead to serious anaemic diseases and symptoms from the central nervous system.

The endocytic receptor cubam formed by the 460-kDa protein cubilin and the 45-kDa transmembrane protein amnionless (AMN), is essential for intestinal vitamin B12 (B12) uptake and for protein (e.g. albumin) reabsorption from the kidney filtrate. Loss of function of any of the two components ultimately leads to serious B12 deficiency and urinary protein loss in humans (Imerslund-Gräsbeck’s syndrome, IGS).

The team has now described the body's largest cell receptor: A mysterious prehistoric construction that 'back in the day' was created by the meeting of two proteins and which - for reasons we do not yet understand - is preserved in what is in molecular terms a colossal structure that has never been seen before. In the 1960s, the female scientist Dorothy Hodgkin received the Nobel Prize for her scientific breakthrough in determining the structure of the B12 vitamin. Now we are also aware of the more than one thousand times larger receptor structure which the B12 vitamin is completely dependent on and which enables it to be absorbed in the body.

The authors present the crystal structure of AMN in complex with the amino-terminal region of cubilin, revealing a sophisticated assembly of three cubilin subunits combining into a single intertwined β-helix domain that docks to a corresponding three-faced β-helix domain in AMN. This β-helix-β-helix association thereby anchors three ligand-binding cubilin subunits to the transmembrane AMN.

Electron microscopy of full-length cubam reveals a 700–800 Å long tree-like structure with the potential of dimerization into an even larger complex. Furthermore, effects of known human mutations causing IGS are explained by the structural information.

The research results shed fundamental light on the issue of why people in some cases have problems with vitamin B12 absorption and lose nutrients in the kidneys. "With the help of x-ray crystallography, we've succeeded in determining how the receptor is able to organise itself in a previously unknown way in human biology. With this new knowledge we're finally able to explain why thousands of people around the world with specific genetic changes are unable to absorb the vitamin," explains another author.

In 2010, this research led to new and pivotal knowledge about how the receptor specifically recognises B12 in the small intestine. "The research we're carrying out today is a continuation of decades of research into the vitamin B12. Indeed, twenty-five years ago we had no idea about what was going on the shadowy recesses of the intestines. Now the lights have been turned on and we can see how it all works in a way that none of us could have imagined," says another author.

"Apart from obviously being very satisfying from a scientific viewpoint, it also opens completely new perspectives for medical treatment. For example, we now have in-depth knowledge about a receptor that could evidently be used to transport drugs into the kidneys and intestines," the author says.