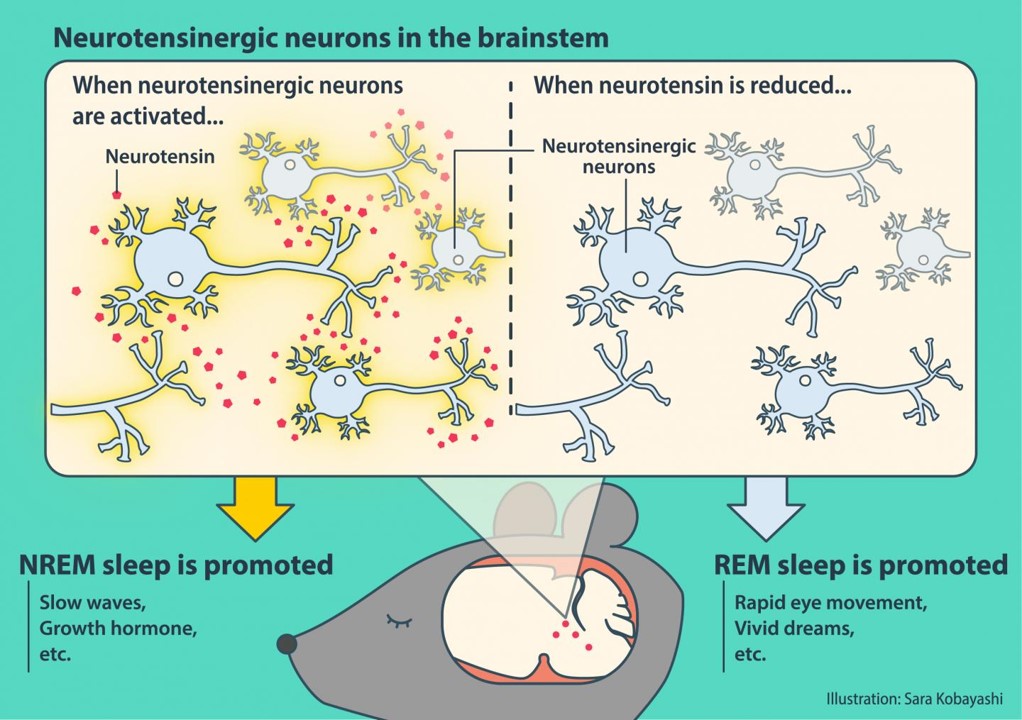 Mammals experience rapid eye movement (REM) and non-REM (NREM) sleep. While the hypothalamus and brainstem are known to be a critical regulators of sleep, the precise mechanism is not fully understood. New work in mice has found that a widely distributed network of neurotensinergic neurons regulates NREM sleep, which also implicates a critical role of the neuropeptide neurotensin.

A normal sleep architecture is crucial for physical and cognitive health, and disruption of REM/NREM sleep can therefore have serious consequences. While several brain areas including the hypothalamus are known to be essential for NREM sleep, comparatively little is known about how the brainstem controls NREM sleep.

Previous work has found that a subregion of the brainstem, the sublaterodorsal tegmental nucleus (SubLDT), regulates both REM and NREM sleep. Researchers therefore targeted this area to identify NREM sleep-promoting neurons, and found that a wide network of neurotensin-producing neurons is involved in NREM sleep regulation. The article was published in Current Biology.

"Using microarray analyses, we measured the expression levels of several genes in the mouse SubLDT," says the last author of the study. "A subset of these SubLDT neurons had a high, selective expression of the gene Nts, which encodes the neuropeptide neurotensin. Artificial activation of these SubLDT neurons promoted NREM sleep, which confirmed the role of Nts-expressing neurons in NREM sleep."

NREM sleep-promoting neurons were also found in three other brainstem structures that have not previously been proven to be involved in sleep regulation (the dorsal deep mesencephalic nucleus, periaqueductal gray, and medial vestibular nucleus). Neurons in these regions also expressed Nts. Furthermore, direct administration of neurotensin itself induced NREM sleep-like brain activity.

"Our findings not only provide insights about brainstem involvement in NREM sleep promotion, but also highlight the key role of neurotensin," says the first author. "It will be interesting to see whether Nts-expressing neurons contribute to the co-ordination between sleep and other known functions of neurotensin signaling, such as pain and metabolism. The response of Nts-expressing neurons also differed according to the time of day, so the influence of the circadian rhythm on these neurons should be studied."

More broadly, these results could tell us something about the evolution of the complex sleep architecture of mammals. Future work could examine whether similar Nts¬-expressing neurons are also present in vertebrates, which do not experience REM and NREM sleep.