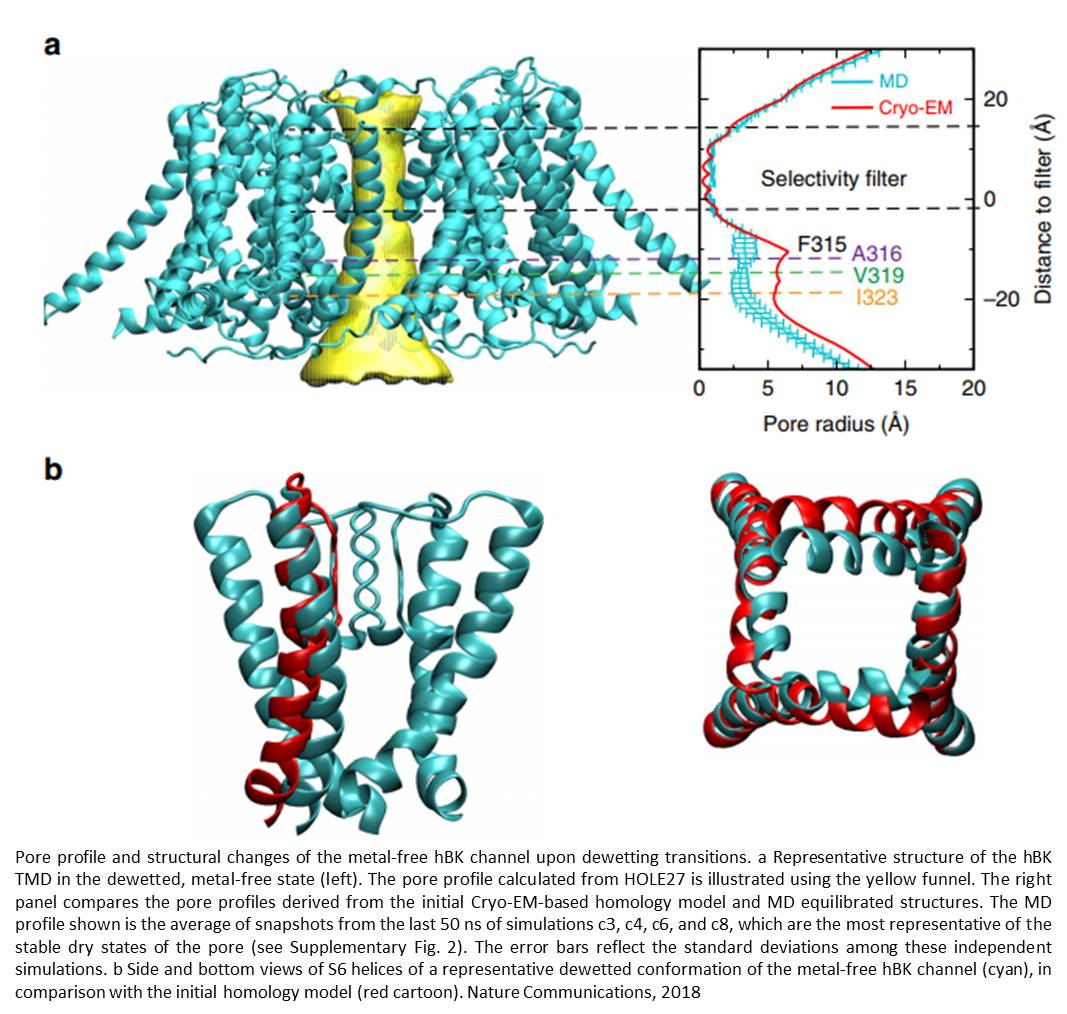 Computational biophysicists are not used to making discoveries, says the senior author, so when they cracked the secret of how cells regulate Big Potassium (BK) channels, they thought it must be a computational artifact. But after many simulations and tests, they convinced themselves that they have identified the BK gating mechanism that had eluded science for many years.

The senior author says, "The main way for the nervous system to send electrical signals is by opening and closing potassium and other ion channels that help regulate neuronal firing and neurotransmitter release. These Big Potassium channels are central for coupling electrical signaling to calcium-mediated events such as muscle contraction and neural excitation," and how blood pressure is regulated, for example.

"These BK channels contain extra-large pores, so they can sustain very large current, which lets the cell respond faster," author adds. BK channels play an important role in many health conditions such as hypertension, epilepsy, autism and mental retardation.

A key puzzle over the past 30 years has been trying to understand how cells close, or gate, BK channels, which have an unusually large central pore. In more typical-sized pores, the channel proteins generally contain structures that move into position to physically close the ion passage when ordered. But findings by others had shown that, inexplicably, the large central pore in BK channels "seems to remain wide open in both activated and deactivated states." The author says, "The recently solved atomistic structures confirm that the pore still looks literally wide open even when it is closed to potassium passage. Nobody could understand this."

"There were a lot of hypotheses, but no answers," author notes. Now in Nature Communications, the team demonstrates that a physical gate is not required for closing BK channels. Instead, a phenomenon known as "hydrophobic dewetting" gives rise to a vapor phase in the pore's central cavity to block intracellular access to the selectivity filter.

The gate mechanism in BK channels they have been studying is "drastically different from what has been observed in other ion channels," the authors point out. "We believe that this work represents a paradigm shift in our thinking of regulation and gating of BK channels," and is "one of the first few examples of a true 'hydrophobic gate,' where the barrier to ion permeation arises directly from dewetting transitions."

Hydrophobic dewetting refers to a phenomenon similar to the way water placed on an oily surface beads to form droplets. Initiation of dewetting transitions in BK channels requires changes in the pore shape and surface hydrophobicity driven by calcium binding. When the BK pore is oily, the water forms a vapor phase that acts like a barrier and prevents all ions from entering, author says. "Nothing gets through."

The team used computational modeling and physics-based atomistic simulations supported by the enormous computational power to carry out this work. They found the hydrophobic gating mechanism is also consistent with scanning mutagenesis studies showing that modulation of pore hydrophobicity is correlated with activation properties.

The author explains, "We know the physical properties of each atom and how they interact. Our simulations put these systems together and from the collective dynamics we can examine how biological systems work." The author adds, "Our data reconciles key results from previous experimental studies without invoking any crazy ideas. We are really proud of solving one of the biggest mysteries in the BK field."

The author says, "If you think about why nature might want to use a vapor barrier where there is a big pore that has to carry a lot of electrical current, to apply a physical barrier you would need a protein structural re-arrangement which would probably be either too big or too slow, or both. In a way, nature is really clever in using this hydrophobic dewetting phenomenon to create a sensitive and fast gate. We were actually really surprised to see that the changes in pore shape and surface properties are relatively small and subtle, but they have big consequences on its hydration properties."

Further, author says, "In terms of understanding how the channel is gated, now we know more and it gives us a strong basis to see how other domains of BK channels talk to the pore and how the membrane voltage, calcium gradient, and a few other chemical signals control the state of the pore. In principle, that knowledge should be useful in developing new therapies and strategies in targeting the channel."

A missing genetic switch at the origin of malformations

A genetic mutation confirmed as predisposing factor in chronic obst…