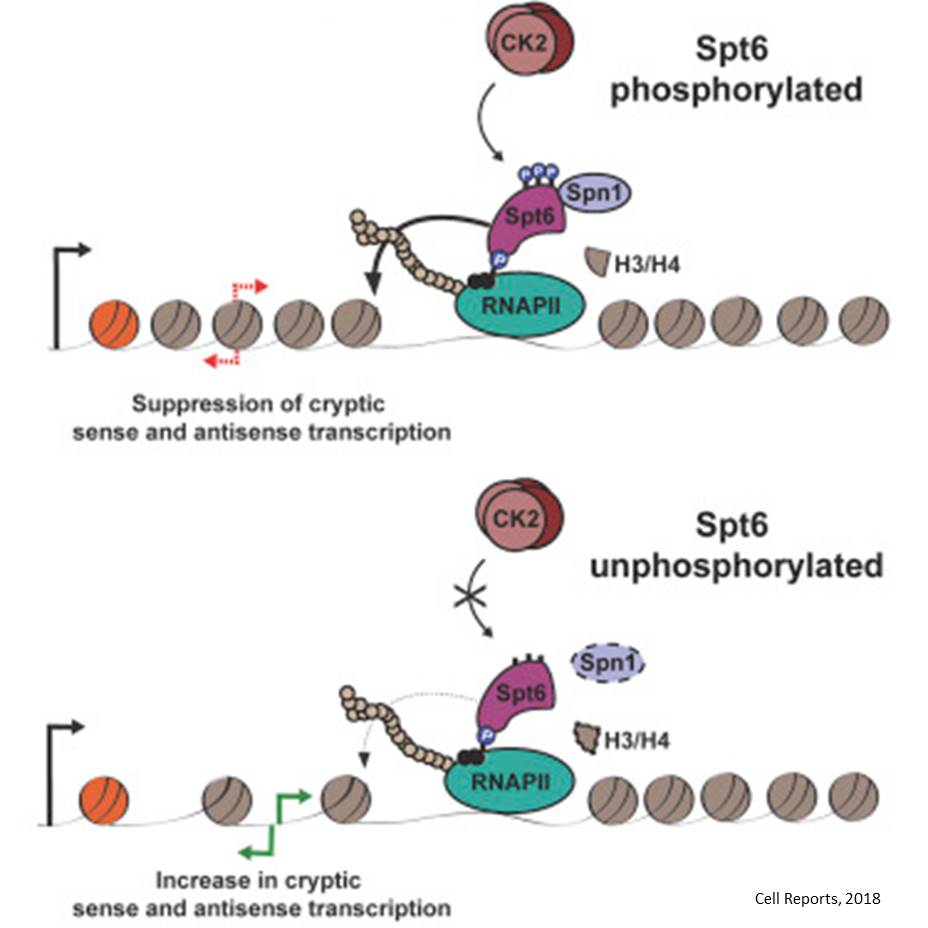 Scientists have discovered a crucial quality-control mechanism inside cells that, when it fails, might contribute to major diseases including cancers.

The discovery, published in Cell Reports, concerns the process of gene transcription or gene expression - the copying of a gene's DNA into RNA - the essential first step in turning genetic information into functional molecules such as proteins. The scientists found that an enzyme called casein kinase II phosphorylates Spt6, a key protein in the transcription process that enables Spt6 to wind back up the DNA after transcription. This rewinding prevents inappropriate transcription from occurring in the wrong direction along the gene. Such a "wrong way" situation can lead to serious health conditions.

"We made this finding in yeast cells, but all the players are found in human cells, too, and many of them are linked to human disease," said senior author.

The DNA in our cells is wound onto millions of spool-like structures made of proteins called histones. Each histone spool and its wrapped DNA is referred to as a nucleosome. When a cell needs to transcribe a stretch of DNA, the histones and their helper proteins called "histone chaperones" loosen up the nucleosome so that the molecular machinery of transcription can access the hidden DNA. When the process of transcription is complete, the histone chaperones then usually put nucleosomes back together and keep DNA firmly wrapped. How this crucial and complex job is performed so well across the genome is not fully known.

In their new study, theteam found an important piece of this puzzle: a new function of an enzyme that makes a histone chaperone function properly, which in turn helps prevent the serious errors in DNA-wrapping that lead to disrupted gene transcription. Both the enzyme casein kinase II and the histone chaperone Spt6 were already known to be involved in gene transcription, though their precise roles were unclear.

The scientists found that casein kinase II activates Spt6 in a way that allows the chaperone protein to work with histones to properly batten down DNA. The enzyme performs this activation by chemically attaching phosphorylation groups (i.e., molecular tags) onto Spt6. "Phosphorylation" is a common method by which cells switch a protein's function from "on" to "off" or the other way around.

To study the importance of the phosphorylation on Spt6, the scientists reengineered Spt6 slightly so that it could no longer be modified by the kinase, and found that Spt6 wasn't performing its job well in putting nucleosomes back together. Curiously, this effect was more pronounced on the nucleosomes at the starting point of gene transcription, which led to a peculiar form of abnormal transcription.

"We observed an increase in transcripts that run from the start of the gene backwards through the gene's regulatory or so called "promoter" region - where transcription begins - not downstream as normal," said study first author.

The scientists concluded that casein kinase II's crucial phosphorylation of Spt6 allows it to place histones back at the beginning of genes in order to help it enforce normal gene transcription in the right direction..

This basic science discovery could lead to medically important insights because loss of the ability to control transcription can be harmful to cells, for example by allowing stretches of DNA that don't code for genes to be expressed. This can interfere with normal transcription. It can also lead to neighboring genes being improperly activated if nucleosomes are not re-inserted at their promoters to block new transcription after a gene is supposed to be shut down.

Such transcriptional mis-regulation can result in serious diseases such as cancer (for example, if a tumor suppressor gene is affected). In fact, any derangement of the normal dynamics of DNA packaging is potentially a cause of major illness. The senior author said many of the proteins involved in packaging and unpackaging our DNA have been found at abnormal levels or are mutated in many cancers, and some of these proteins are being eyed as potential cancer drug targets.

In follow-up experiments, the scientists hope to determine how exactly Spt6 exerts its DNA-organizing effect particularly at the upstream ends of genes and how it interacts with other histone chaperone proteins.