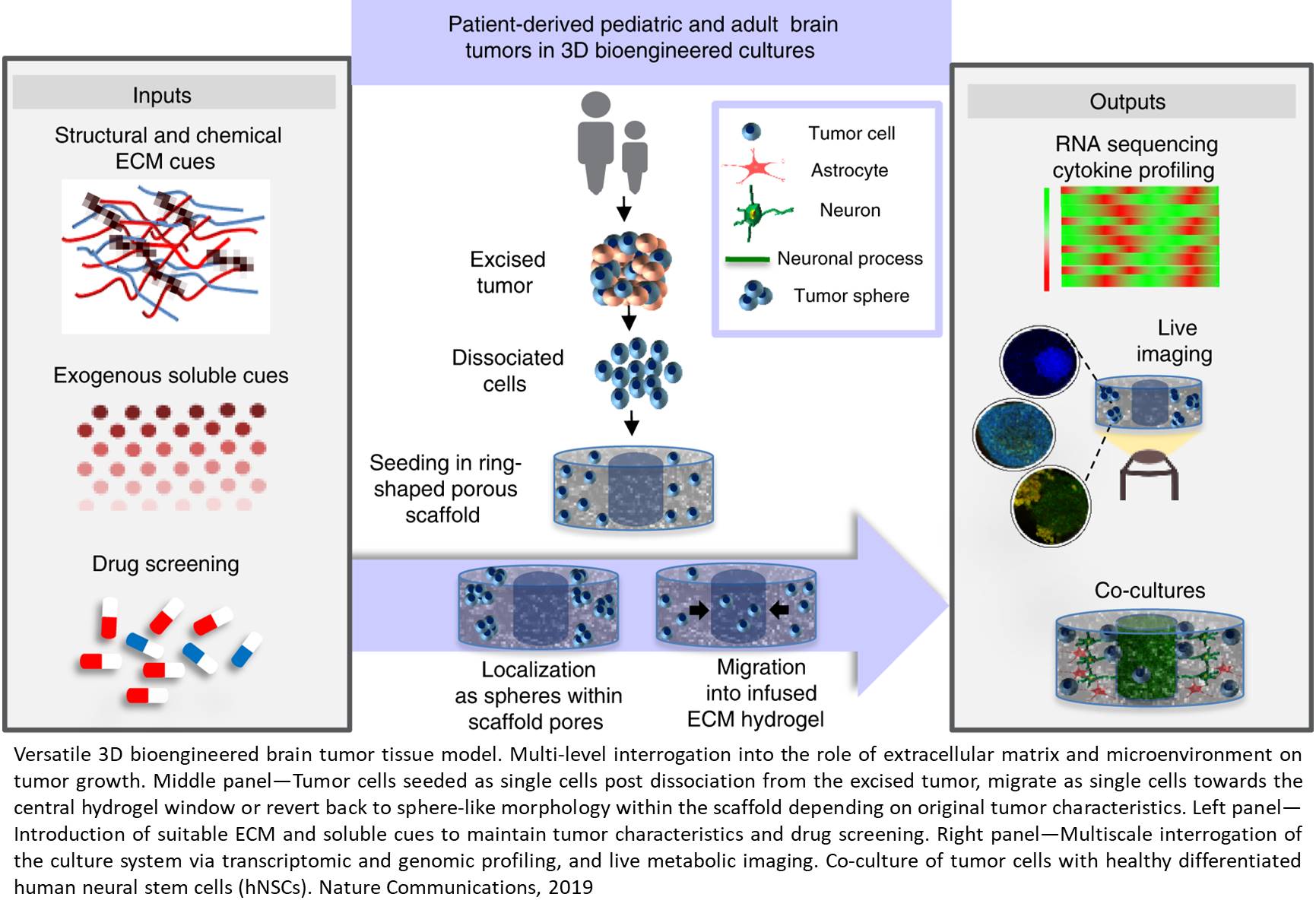 A team of researchers has developed three-dimensional (3D) human tissue culture models of pediatric and adult brain cancers in a brain-mimicking microenvironment, a significant advancement for the study of brain tumor biology and pharmacological response. The study was published today in Nature Communications.

The researchers created models that include brain-derived extracellular matrix (ECM) - the complex network of proteins and amino acids with bound sugars naturally found in the brain. The ECM not only provides support for surrounding neural tissue, but also helps to guide cell growth and development. Alterations in ECM composition have been associated with brain tumor progression, which in turn alters patterns of genetic and protein expression in the tumor cells.

Earlier studies have noted this important two-way interaction between tumor cells and the surrounding ECM, and observed that the protein composition in the ECM can either prevent or allow the further diffusion of tumor cells in the brain. In order to better understand the dynamic interactions between tumors and the ECM, the study authors developed a 3D in vitro system in which they can examine different ECM components and define their contribution to tumor development, as well as tumor response to drug treatments.

The study focused on two common types of brain tumors, both with particularly dismal prognoses - ependymoma, which occurs in young children, and glioblastoma in adults, which results in a median survival of 1-2 years post diagnosis. In an important advance, the ECM-containing 3D matrix in this study has allowed for the propagation and study of primary tumor cells taken directly from the patient, and to grow them in an environment more similar to the brain.

Previous studies examined established tumor cell lines -- not necessarily the tumor of interest -- on 3D scaffolds or spheroids without the ECM, or spread cells out in two dimensions (plating), eliciting cell behavior not seen in their natural environment.

The power of this platform is that we can tune the composition of the ECM to find out the role of each component in tumor growth, and we can see the effect on tumor cells derived directly from the patient," said the senior author. "Another important feature is that we can track the 3D growth of cells with non-invasive two-photon excited fluorescence metabolic imaging. In other words, we can use non-invasive imaging to assess if they are viable and growing, or stressed and dying, in real-time."

Among the findings revealed in the study was that fetal ECM, which contains higher levels of collagen, HA and certain CSPGs, was better at supporting tumor growth than adult ECM in the 3D cultures (both fetal and adult ECMs were derived from pig brains). That result correlates with the notion that brain cancers tend to alter the ECM so its composition becomes more "fetal-like" to support their growth, according to the researchers.

Another key finding was the appearance of lipid (fat) droplets being released by the adult glioblastoma cells which may contribute to lowering the drug sensitivity of many glioblastoma cells (possibly by absorbing the drugs). This may be correlated with poor survival both in the 3D tissue model and in patients. The droplets have not been observed in vitro prior to these experiments, suggesting that this model is a robust system to study the behavior of brain tumors in the lab.

"With this platform, we have the potential to better understand what dictates the invasive behavior of brain tumors and screen drugs for their effect on tumor growth of patient-derived cells," said the first author of the study. "Although it's a preliminary notion, the ability to maintain viable cultures of patient-derived tumor cells and metabolically track them non-invasively, suggests the possibility of monitoring the cells' behavior and drug sensitivity over time, to inform treatment decisions."