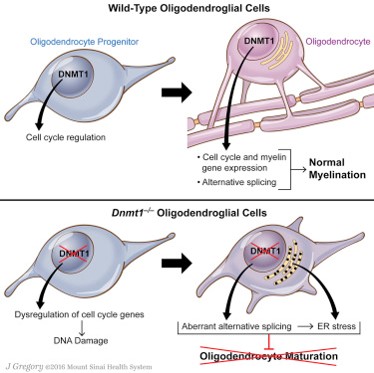 Oligodendrocytes (OLs) are cells with the ability to form a specialized membrane that is called "myelin." Myelin is the insulating sheathing around the axons of nerve cells, which provides energetic support and allows for faster electrical impulse conduction. OLs are derived from progenitors called OPCs, which are stem-like cells with the ability to divide and generate OLs through a complex process of gene regulation.

This study published in the journal Cell Reports shows that the development of OPCs into myelin-forming cells requires DNA methylation, which is a process consisting of the addition of chemical groups to the DNA carried out by enzymes called methyl transferases (DNMTs). When these groups are added, genes cannot be expressed and therefore are "silenced." The authors identify the many genes needed to be "silenced" in OPCs in order to allow for proper formation of myelin during development.

Researchers showed that the removal of Dnmt1 in oligodendrocyte lineage not only limited cell growth, but also led to cellular stress as well as severe and clinically symptomatic hypomelination - a reduced amount of myelin in nervous tissue. The mice experienced significant neurological symptoms, such as tremors and a loss of control of body movement, and eventually death.

"Our group has previously observed altered DNA methylation in the brain of patients with multiple sclerosis, the most devastating adult demyelinating disorder, but its role in myelin formation and the identity of the genes silenced by DNMT's in OPCs were not known," says lead investigator. "A better understanding of why DNA methylation is important for myelin formation and what genes need to be shut off during the formation of OLs from OPCs has important implications not only for development, but also for myelin repair."

Further study is needed to understand the causes underlying aberrant DNA methylation in the brains of multiple sclerosis patients and in preclinical models. Translational applications will include the identification of factors that could bypass impaired DNA methylation.