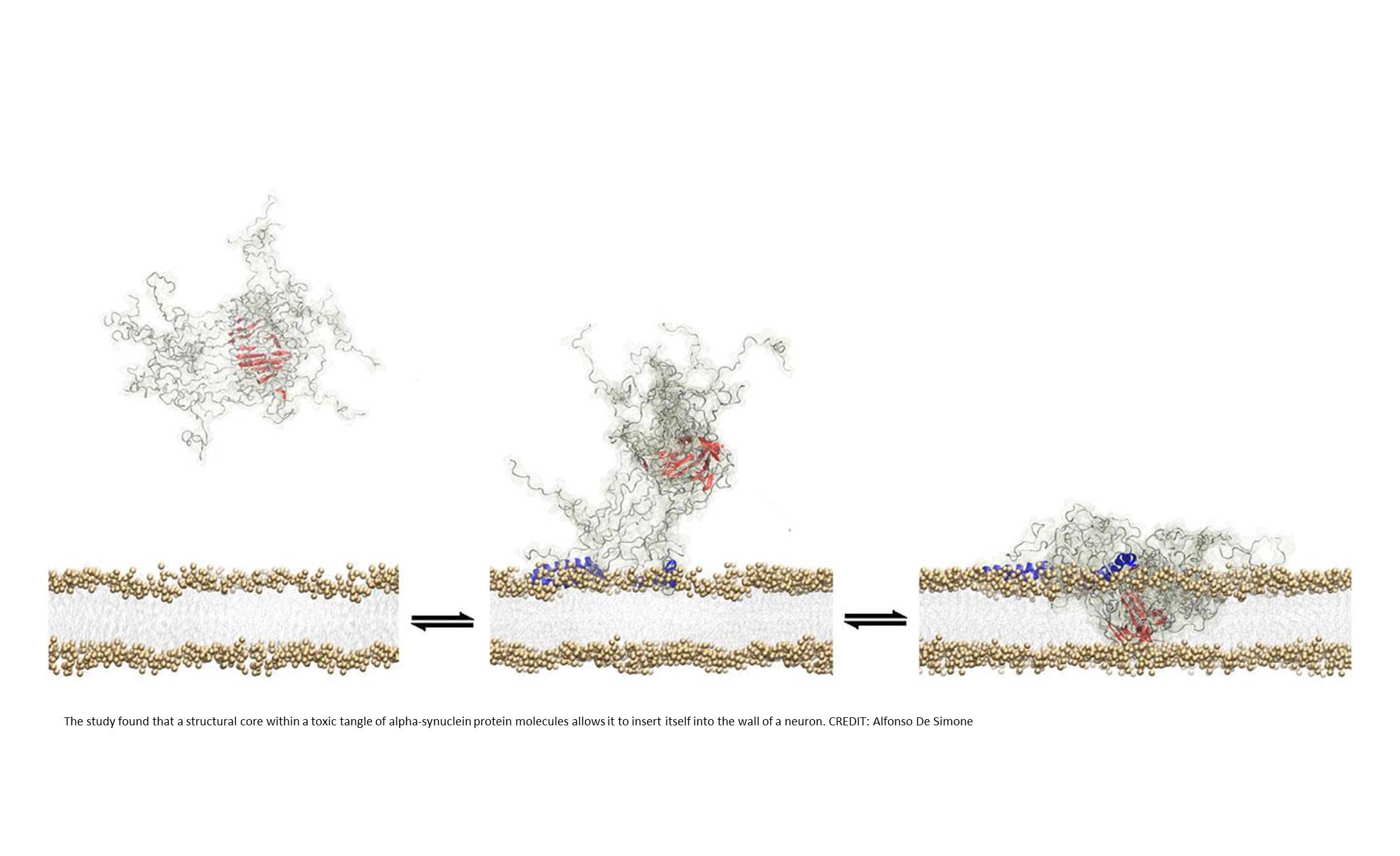 Researchers have glimpsed how the toxic protein clusters that are associated with Parkinson's Disease disrupt the membranes of healthy brain cells, creating defects in the cell walls and eventually causing a series of events that induce neuronal death.

The study examined what are known as toxic oligomers, clusters of protein molecules that emerge when individual proteins misfold and clump together. In the case of Parkinson's Disease, the protein involved is called alpha synuclein, which when it is functioning normally plays an important part in signalling in the brain.

The formation and spread of these clusters is thought to be a key component of the underlying molecular mechanisms of this progressive illness. Understanding how they enter and damage cells presents an opportunity to develop new and more effective treatments. But until now, studying how they damage brain cells has been extremely difficult as they are typically unstable. Shortly after forming they either fall apart, or assemble into larger structures that are less damaging to individual cells.

In the new study, academics were able to stabilise oligomers long enough to examine how they damage brain cell walls in unprecedented detail. They identified a specific feature of the oligomer which allows it to latch on to the cell wall, and a "structural core", which then breaks through.

"It is a common property of oligomers that they can damage brain cells once they bind to the surface," author explained. "It is a bit like if you put a piece of extremely hot metal on to a plastic surface. In a fairly short space of time it will burn a hole through the plastic. The oligomer does something similar when it comes into contact with the cell membrane, and this disrupts the integrity of the membrane, which is the key step in the mechanisms leading to the death of the neuron."

In support of these conclusions, authors show that mutations that target the region that promotes strong membrane interactions by α-synuclein oligomers suppressed their toxicity in neuroblastoma cells and primary cortical neurons.

The lead author said: "Just having this information doesn't mean that we can now go and make a drug, but obviously if we can understand why these clumps of proteins behave the way they do, we can make faster scientific progress towards treating Parkinson's Disease. It means we can take a more rational approach to drug discovery."

Toxic oligomers form at an early stage in the series of events that lead to Parkinson's Disease, which are believed to begin when alpha synuclein proteins malfunction and begin to stick together. Their emergence is lethal to neuronal function in this context. Once the oligomers have formed, they disperse, and allow the initial toxicity to spread to other cells.

In the study, researchers examined samples in the lab of both toxic and non-toxic forms of oligomeric alpha synuclein oligomers using solid state nuclear magnetic resonance spectroscopy (SSNMR). Recent developments in this technology enabled them to study the oligomers in a level of detail that was not previously possible. The research team characterized different features of the structures, and then studied how these various properties influenced their interactions with sample brain cells taken from rats, as well as additional cells taken from human brain tumours.

The study's results could, in particular, inform the identification of molecules that can attack these damaging toxins and hence limit their impact.