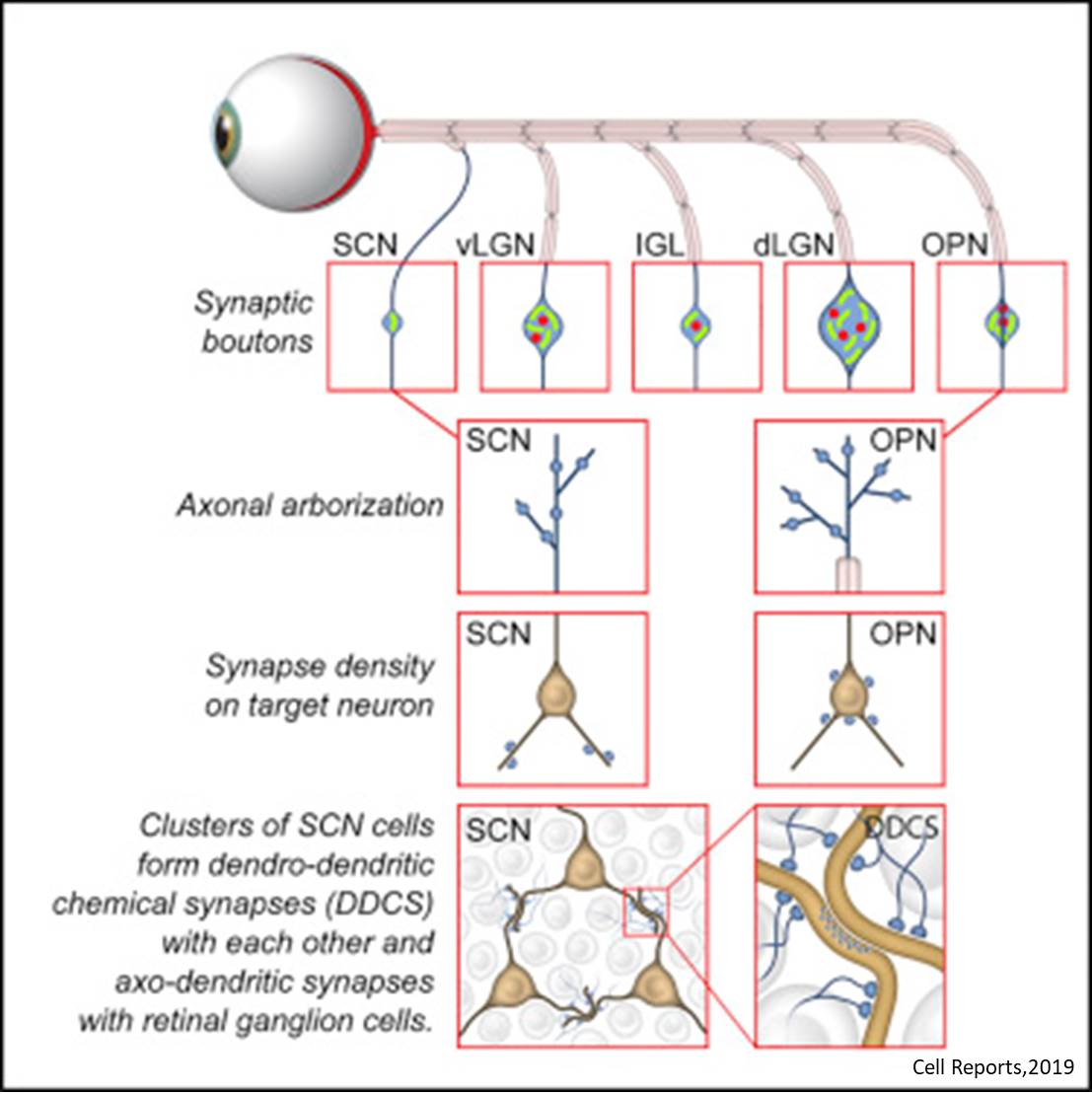 In recent decades, scientists have learned a great deal about how different neurons connect and send signals to each other. But it's been difficult to trace the activity of individual nerve fibers known as axons, some of which can extend from the tip of the toe to the head. Understanding these connections is important for figuring out how the brain receives and responds to signals from other parts of the body.

Researchers are reporting a novel technique for tracing these connections and determining how neurons communicate. The team used this technique to uncover details about how the brain responds to light signals received by the retina in mice, published in Cell Reports.

"This study is a breakthrough because no one could figure out how to study these connections before," says the co-corresponding author of the paper. "This new technique has enabled us to go well beyond the limitations of electron microscopy."

The new method makes use of several different laboratory techniques to understand a type of neuron called intrinsically photosensitive retinal ganglion cells (ipRGCs). These cells, which are found in the retina, in the back of the eye, express a protein called melanopsin that senses blue light.

The teams used a virus to deliver a protein called a mini-singlet oxygen-generating protein (mini-SOG) to the ipRGCs, so that the cells could be viewed in more detail under election microscopy. The system was designed to tether the mini-SOG to the membranes of the light-sensitive cells so that the entire neuron, including its long axons that reach out to different parts of the brain, can be easily tracked under both light and electron microscope.

"Thanks to development and application of new genetically introduced probes for correlated multiscale light and electron microscopic imaging, our Salk and UCSD-based research teams were able to follow the small processes emanating from nerve cells over centimeters, all the way from the retina to multiple places where they connect to brain regions critical to circadian rhythms, eye reflexes and vision," says the co-lead of the work. "We were able to obtain unprecedented three-dimensional information about the machinery required for these neuronal cells to signal the next neurons in the complex circuits."

Most of the previous work with mini-SOGs has been done in cell lines, and using them in mice, to map how neurons from the retina wire the brain, was a first, according the researchers. The method enabled them to glean new information about the connections between ipRGCs and different parts of the brain.

The ipRGCs are known to connect to many brain regions that regulate very different tasks. The cells tell one part of the brain how bright it is outside so that our pupil can rapidly close--in less than a second. The same ipRGCs also connect to the master clock in the brain that regulates our sleep-wake cycle. "However, it takes several minutes of bright light to make us fully awake," the co-corresponding author says. "How the same ipRGCs do these very different tasks with different time scales was not clear until now."

The investigators found that the difference has to do with the way that light detected by the retina reaches the brain. By delivering the mini-SOG to the eyes of the mice, they were able to trace the signal to the part of the brain that constricts the pupil in response to light.

"These connections were much stronger--similar to water pouring out of a garden hose," the author says. "Whereas the connection between the ipRGCs and the master clocks were weaker--more like drip irrigation." Because the ipRGCs deliver the light signal to the circadian center through this slower drip system, it takes longer for any meaningful information to reach and reset the brain clock.

"This research helps explain why, when you get up in the night to get a drink of water and turn on the light for a few seconds, you're usually able to go right back to sleep," the author says. "But if you hear a noise outside and end up walking around your house for half an hour with the lights on, it's much harder. There will be enough light signal reaching the master clock neurons in the brain that ultimately wakes up the rest of the brain."

The author says that the new technique will be useful for studying other neural connections, as the researchers can essentially use the same viruses to express mini-SOGs in any neuron and ask how different neurons make connections to different appendages.