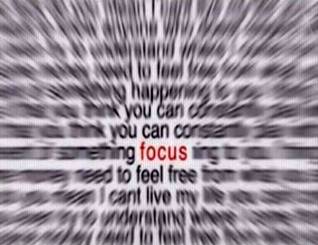 The new research offers evidence that one's motivation is just as important for sustained attention to a task as is the ease with which the task is done. The research also challenges the hypothesis, proposed by some cognitive neuroscientists, that people become more distractible as they tackle increasingly difficult tasks.

A report of the new study appears in the Journal of Experimental Psychology: General.

Researchers designed several experiments to test whether people are more easily distracted when the mental effort required to complete a task goes up, as is generally assumed in their field.

The researchers first asked participants to solve math problems of varying difficulty while photographs of neutral scenes - for example, cows in a pasture, a portrait of a man, a cup on a table - flashed on a computer display for three seconds, enticing the subjects to look at them. An eye-tracking device measured the frequency, speed and focus of participants' eyes as they completed the math problems.

The results showed that participants who were engaged in an easy version of the task were more likely to look at the distractors than those engaged in an extremely challenging version. These results run counter to current theories, the researchers said.

"This suggests that focus on complex mental tasks reduces a person's sensitivity to events in the world that are not related to those tasks," Buetti said. This finding corresponds to research on a phenomenon called "inattentional blindness," in which people involved in an engaging task often fail to notice strange and unexpected events.

"Interestingly, when participants completed a mix of easy and hard tasks, the difficulty of the task did not seem to affect their distractibility," author said. This finding led the researchers to hypothesize that the ability to avoid being distracted is not driven primarily by the difficulty of the task, but is likely the result of an individual's level of engagement with the endeavor. They call this concept the "engagement theory of distractibility."

The team did further studies to test this idea, manipulating subjects' enthusiasm for the task with financial incentives. To the researchers' surprise, this manipulation had little effect on participants' distractibility. However, there were large differences between people in terms of their distractibility.

"The more participants struggled with a task, the more they reflexively avoided distraction, irrespective of financial incentive," author said. "So, the take-home message is: Characteristics of the task itself, like its difficulty, do not alone predict distractibility. Other factors also play a role, like the ease with which we can perform a task, as well as a decision that is internal to each of us: how much we decide to cognitively engage in a task."