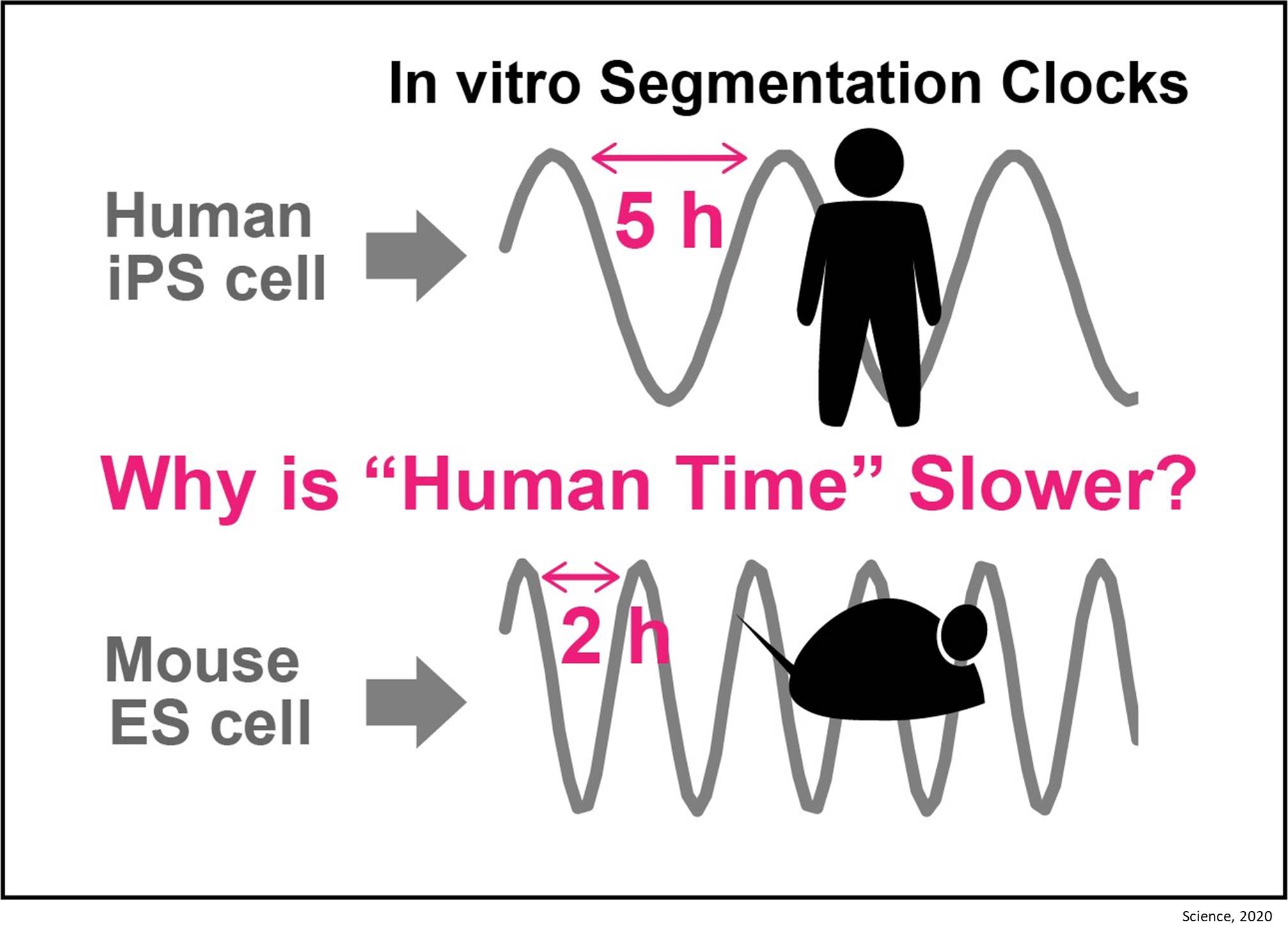 In the early phase of the development of vertebrates, the embryo develops into a series of "segments" that eventually differentiate into different types of tissues, such as muscles or the ribs. This process is known to be governed by an oscillating biochemical process, known as the segmentation clock, which varies between species. For example, it is about two hours in mice, and about five hours in humans. Why the length of this cycle varies between species has remained a mystery, however.

To solve this mystery, the group began experiments using embryonic stem cells for mice and induced pluripotent stem (iPS) cells which they transformed into presomitic mesoderm (PSM) cells, the cells that take part in the segmentation clock.

They began by examining whether something different was happening in the network of cells or whether there was a difference in the process within cells. They found, using experiments that either blocked important signals or put cells in isolation, that the latter is true.

With the understanding that processes within cells were key, they suspected that the difference might be within the master gene--HES7--which controls the process by repressing its own promoter, and did a number of complex experiments where they swapped the genes between the human and mouse cells, but this did not change the cycle.

According to corresponding author, "Failing to show a difference in the genes left us with the possibility that the difference was driven by different biochemical reactions within the cells." They looked at whether there were differences in factors such as the degradation rate of the HES7 protein, an important factor in the cycle. They looked at a number of processes including how quickly mouse and human proteins were degraded and found, confirming the hypothesis, that both proteins were degraded more slowly in human cells than in mouse cells. There were also differences in the time it took to transcribe and translate HES7 into proteins, and the time it took for HES7 introns to be spliced. "We could thus show," says the author, "that it was indeed the cellular environment in human and mouse cells that is the key to the differential biochemical reaction speeds and thus differential time scales."

The author continues, "Through this we have come up with a concept that we call developmental allochrony, and the present study will help us to understand the complicated process through which vertebrates develop. One of the key remaining mysteries is exactly what is difference between the human and mouse cells that drives the difference in reaction times, and we plan to do further studies to shed light on this."