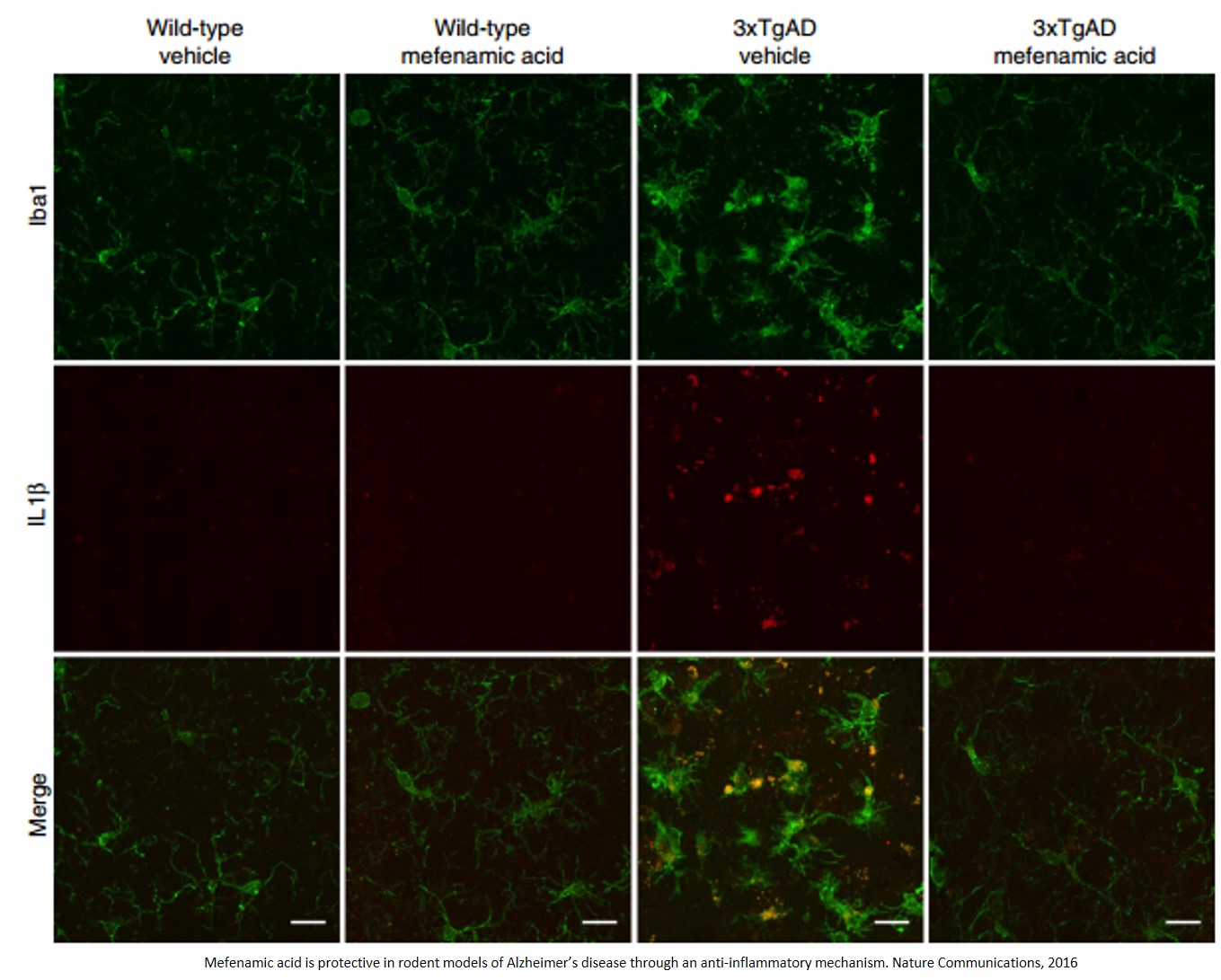 Nearly everybody will at some point in their lives take non-steroidal anti-inflammatory drugs; mefenamic acid, a common Non-Steroidal Anti Inflammatory Drug (NSAID), is routinely used for period pain.

The findings are published in a paper in the respected journal Nature Communications. Though this is the first time a drug has been shown to target this inflammatory pathway, highlighting its importance in the disease model, the author cautions that more research is needed to identify its impact on humans, and the long-term implications of its use.

Around 500,000 people in the UK have Alzheimer's disease which gets worse over time, affecting many aspects of their lives, including the ability to remember, think and make decisions.

In the study transgenic mice that develop symptoms of Alzheimer's disease were used. One group of 10 mice was treated with mefenamic acid, and 10 mice were treated in the same way with a placebo.

The mice were treated at a time when they had developed memory problems and the drug was given to them by a mini-pump implanted under the skin for one month.
Memory loss was completely reversed back to the levels seen in mice without the disease.

The author said: "There is experimental evidence now to strongly suggest that inflammation in the brain makes Alzheimer's disease worse.

"Our research shows for the first time that mefenamic acid, a simple Non-Steroidal Anti Inflammatory Drug can target an important inflammatory pathway called the NLRP3 inflammasome , which damages brain cells." Author added: "Until now, no drug has been available to target this pathway, so we are very excited by this result.

"However, much more work needs to be done until we can say with certainty that it will tackle the disease in humans as mouse models don't always faithfully replicate the human disease.

"Because this drug is already available and the toxicity and pharmacokinetics of the drug is known, the time for it to reach patients should, in theory, be shorter than if we were developing completely new drugs.

"We are now preparing applications to perform early phase II trials to determine a proof-of-concept that the molecules have an effect on neuroinflammation in humans."

Another author said: "Testing drugs already in use for other conditions is a priority for Alzheimer's Society - it could allow us to shortcut the fifteen years or so needed to develop a new dementia drug from scratch.

"These promising lab results identify a class of existing drugs that have potential to treat Alzheimer's disease by blocking a particular part of the immune response. However, these drugs are not without side effects and should not be taken for Alzheimer's disease at this stage - studies in people are needed first."