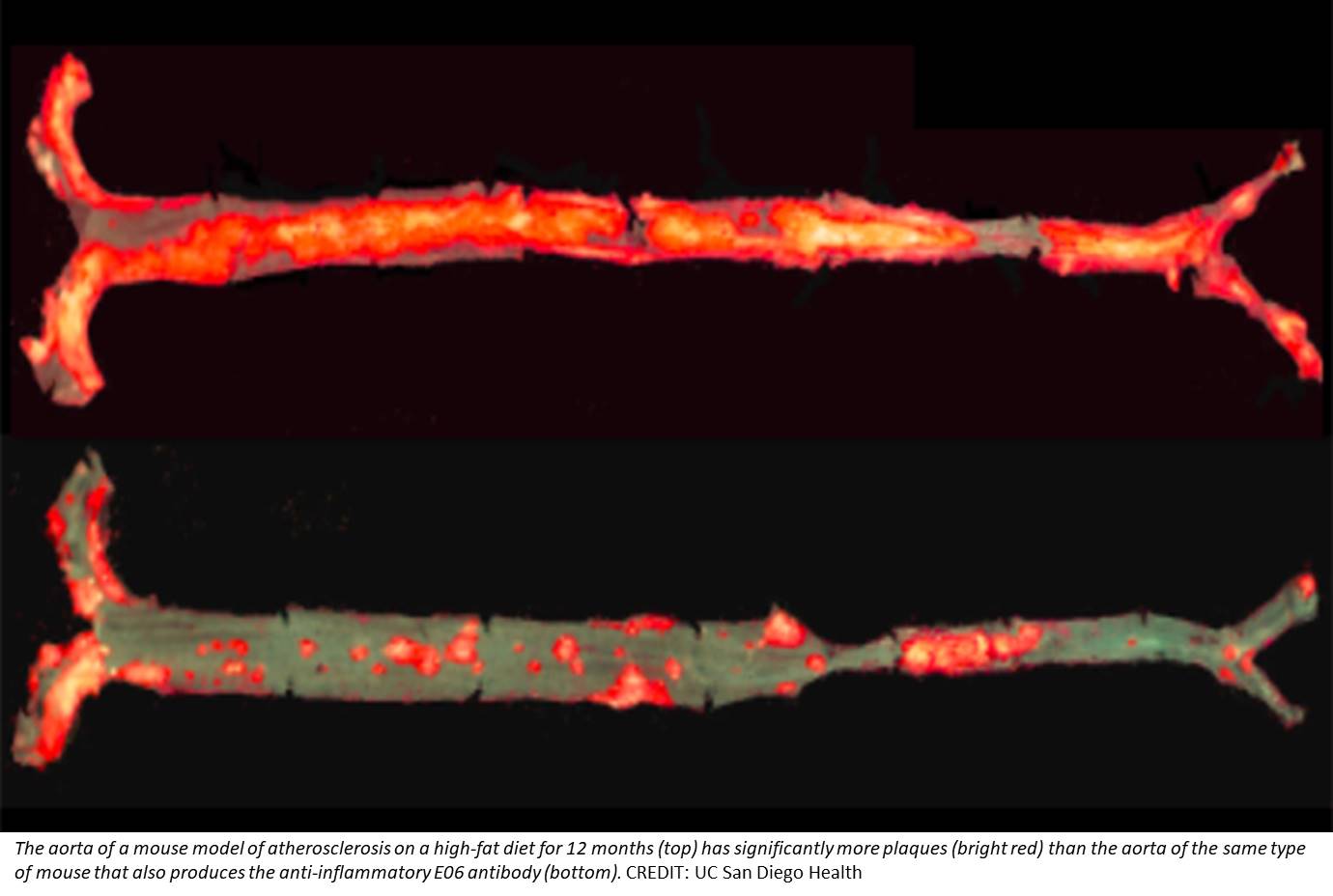 Researchers discovered that they can block inflammation in mice with a naturally occurring antibody that binds oxidized phospholipids (OxPL), molecules on cell surfaces that get modified by inflammation. Even while on a high-fat diet, the antibody protected the mice from arterial plaque formation, hardening of the arteries and liver disease, and prolonged their lives.

This study, published by Nature, marks the first demonstration in a living system that OxPL triggers inflammation and leads to plaque formation. The results also suggest a new approach for preventing or reversing a number of inflammatory diseases.

"Wherever you get inflammation, you get OxPL," said senior author. "It doesn't mean OxPL is the cause, but it definitely plays a major role."

Some phospholipids -- the molecules that make up cell membranes -- are prone to modification by reactive oxygen species, forming OxPL. This event is particularly common in inflammatory conditions such as atherosclerosis, in which artery-blocking plaques form. Prior to this study, researchers were unable to control phospholipid oxidation in a way that would allow them to study its role in inflammation and atherosclerosis.

The team engineered mice with two special attributes: 1) they have a gene mutation that makes them a good model for atherosclerosis and 2) they generate a piece of an antibody called E06 that's just enough to bind OxPL and prevent their ability to cause inflammation in immune cells, but not enough to cause inflammation on its own. They fed the mice a high-fat diet.

Here's what happened: Compared to control mice, the mice with E06 antibodies had 28 to 57 percent less atherosclerosis, even after one year and despite having high levels of cholesterol. The antibody also decreased aortic valve calcification (hardening and narrowing of the aortic valves), hepatic steatosis (fatty liver disease) and liver inflammation. E06 antibody-producing mice had 32 percent less serum amyloid A, a marker of systemic inflammation.

The E06 antibody also prolonged the life of the mice. After 15 months, all of the E06 antibody-producing mice were alive, compared to 54 percent of the control mice.

"We showed for the first time that OxPL are truly pro-inflammatory and pro-atherogenic and, moreover, that they can be counteracted by E06 antibody," senior author said. "This suggests that therapies that inactivate OxPL may be beneficial for reducing inflammation in general, and in particular in the case of diseases such as atherosclerosis, aortic stenosis and hepatic steatosis."

The team is now testing E06 antibody in mouse models of human diseases linked to inflammation, such as osteoporosis (bone loss) and nonalcoholic steatohepatitis (NASH, a type of liver disease).