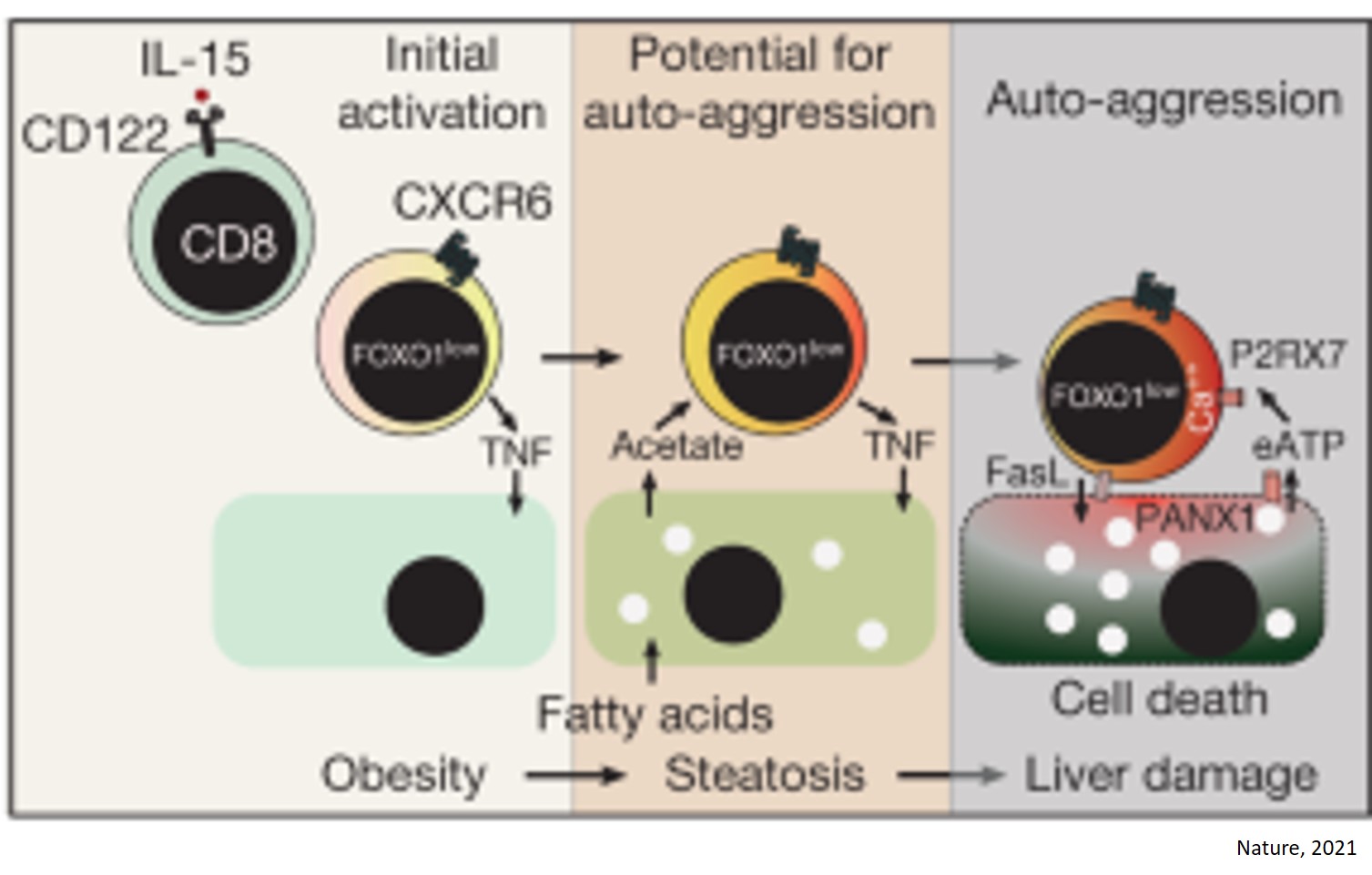 Non-alcoholic steatohepatitis (NASH), often called 'fatty liver hepatitis', can lead to serious liver damage and liver cancer. A team of researchers has discovered that this condition is caused by cells that attack healthy tissue - a phenomenon known as auto-aggression. Their results may help in the development of new therapies to avoid the consequences of NASH.

Fatty liver disease (NASH) is often associated with obesity. However, our understanding of the causes has been very limited. A research team has now explored this process step by step in model systems based on mice - and gained promising insights into the mechanisms causing NASH in humans. "We have seen all of the steps observed in the model systems in human patients," says the senior author. The team's results is published in Nature.

The immune system protects us against bacteria and viruses and the development of cancerous tumors. The so-called CD8 killer T cells play an important role here. They specifically recognize infected body cells and eliminate them. With fatty liver hepatitis, the CD8 T cells have lost this targeted deactivation ability. "We have discovered that, in NASH, the immune cells are not activated by certain pathogens, but rather by metabolic stimuli," says the first author of the study. "The T cells activated in this way then kill liver cells of all types."

Until that point, the immune cells undergo a unique, step-by-step - and previously unknown - activation process. The T cells develop their auto-aggressive properties only when exposed to inflammation signals and products of fat metabolism in the right order. "Like when we use the combination to unlock a safe, the T cells are switched to 'deadly mode' only through the defined sequence of activation stimuli," says the senior author. As the trigger for the killing of tissue cells, the international team of researchers identified a basically harmless metabolite: the presence of the energy-carrying molecule ATP outside cells. When auto-aggressive CD8 T cells in the liver reacted with ATP, they destroyed nearby cells, thus causing NASH.

The destruction of tissue through auto-aggressive immune cells, as discovered by the researchers, differs from familiar auto-immune disorders, in which immune system cells specifically attack certain cells in the body. The authors note, however, that the tissue-destroying auto-aggressive T cells may also play a role in auto-immune pathologies that has yet to be discovered.

Until now, the only way of reversing the effects of fatty liver hepatitis was to eliminate the underlying factors - namely obesity and a high-calorie diet. In other words, patients had to change their lifestyles. The realization that the disease is caused by activated immune cells now suggests possibilities for the development of new therapies. "The destructive auto-aggressive form of the immune response is fundamentally different from the protective T cell immune response to viruses and bacteria," says the senior author.