Chronic inflammation causes a reduction in NAD+ in aging 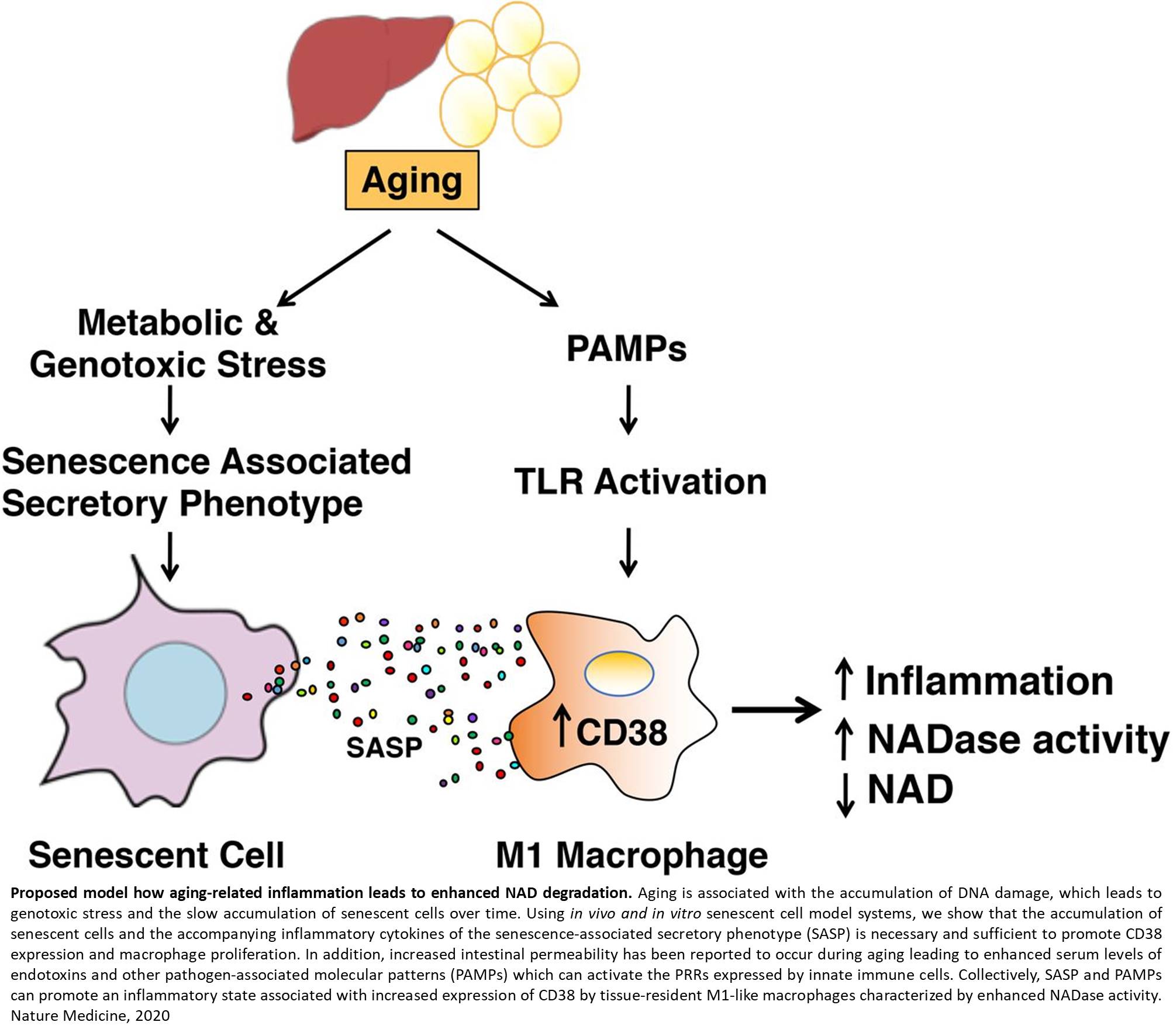 NAD+ (nicotinamide adenine dinucleotide), a key metabolite central to an efficient and healthy metabolism, declines with age. This previously unexplained phenomena is associated with numerous age-related diseases and has spawned the development of many nutritional supplements aimed at restoring NAD+ to more youthful levels. Publishing in Nature Metabolism, researchers have identified chronic inflammation as a driver of NAD+ decline. They show that an increasing burden of senescent cells, which is also implicated in the aging process, causes the degradation of NAD via the activation of CD38 (cyclic ADP ribose hydrolase) a protein that is found on the cell membranes both inside and on the surface of many immune cells.

"We are very excited to link two phenomena which have been separately associated with aging and age-related disease," said the senior author of the paper. "The fact that NAD+ decline and chronic inflammation are intertwined provides a more holistic, systemic approach to aging and the discovery of CD38 macrophages as the mediator of the link between the two gives us a new target for therapeutic interventions."

Scientists have been aware that NAD+ levels decrease with age but The senior author says what hasn't been clear is whether the decline stems from decreased production of NAD+, a problem with the "faucet," or from its degradation, an issue akin to a "leaky sink". "Our data suggests that, at least in some cases, the issue stems from the leaky sink," the author said, "Ultimately I think supplementation will be part of the equation, but filling the sink without dealing with the leak will be insufficient to address the problem." The senior author says preliminary data suggests that blocking CD38 activity in older animals restores NAD+ levels in specific tissues.

Experiments were done in mice and involved metabolic tissue from visceral white fat and the liver which were examined during aging and acute responses to inflammation. The work was validated in primary human macrophages. "Our initial hypothesis was that CD38 activation would be driven by inflammation," another author said, "But we found that in this case, the activation occurred with both acute and age-related inflammation. That was a surprise."

Senescent cells, which stop dividing in response to DNA damage, spew a multitude of pro-inflammatory proteins, called the senescence-associated secretory phenotype or SASP. Evolution selected cellular senescence as a protective measure against cancer; but as senescent cells accumulate in tissues over the course of a lifetime, the SASP drives low grade chronic inflammation which is associated with age-related disease, including late life cancer. "These inflammatory proteins in the SASP induce macrophages to proliferate, express CD38 and degrade NAD+. It's a maladaptive process," said the author, "But drugs that target the SASP or CD38 may offer us another way to deal with the decline of NAD+."

NAD+ is found in every cell; it promotes cellular energy production and supports cellular metabolism. NAD is also critical for the activity of sirtuins which have global anti-aging properties. Comparing our cellular metabolism to a cash economy, the senior author describes NAD+ as the armored trucks that transfer money between institutions. "Money is the fuel. If you can't transport the money, then the whole economy comes to a halt. It all comes crashing down. That's how important NAD+ is to our cellular health and we look forward to applying this discovery to our efforts to stem the ravages of age-related disease."