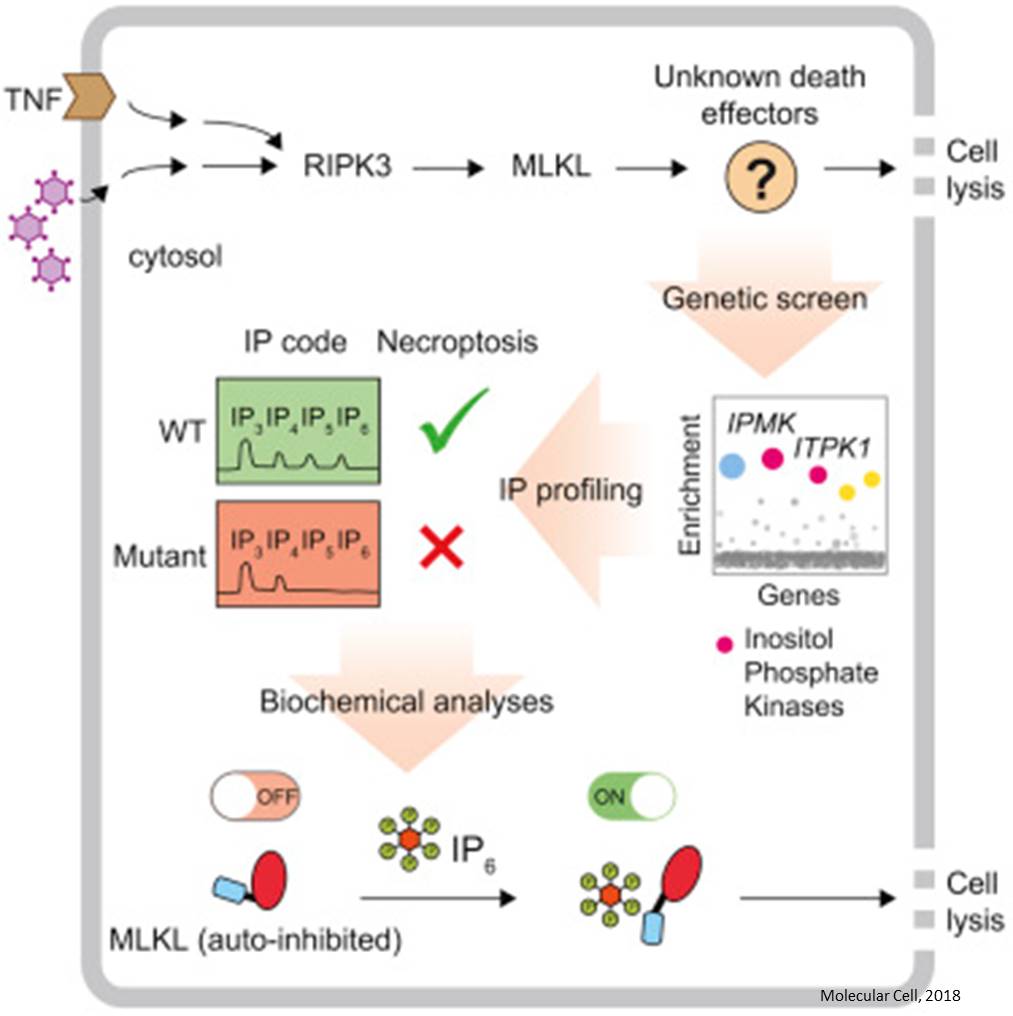 Dying cells generally have two options: go quietly, or go out with a bang. The latter, while more conspicuous, is also mechanistically more mysterious. Now, scientists have pinpointed what they believe is the molecular "code" that unleashes this more violent variety of cell death.

This particular version of cell suicide is called necroptosis, and typically occurs as a result of some sort of infection or pathogenic invader. "Necroptosis is sort of like the cell's version of 'taking one for the team,'" said the senior author. "As the cell dies, it releases its contents, including a damage signal that lets other cells know there's a problem."

Seen in this light, necroptosis seems almost altruistic, but the process is also a key contributor to autoimmune diseases; it's even been implicated in the spread of cancer.

In a new study, researchers discovered the final step of necroptosis, the linchpin upon which the entire process depends. They call it "the death code."

Their work, which will be published in Molecular Cell, not only clears up what happens during this type of cell death, but also opens the door to potential new treatments for diseases in which necroptosis plays a key role, such as inflammatory bowel disease and multiple sclerosis.

When a cell's health is threatened by an invader, such as a virus, a cascade of molecular switches and triggers readies the cell for death by necroptosis. Until recently, scientists thought they had traced the pathway down to the last step. But it turns out that the entire chain is rendered futile without one special molecule, called inositol hexasphosphate, or IP6, which is part of a larger collection of molecules known as inositol phosphates. The senior author likens IP6 to an access code; only in this case, when the code is punched in, it's not a safe or a cellphone that's unlocked: It's cell death. Specifically, a protein called MLKL, which the senior author has nicknamed "the executioner protein," is unlocked.

"This was a big surprise. We didn't know that the killer protein required a code, and now we find that it does," the lead author said. "It's held in check by a code, and it's released by a code. So only when the code is correct does the killer activate, puncturing holes in the cell's membrane as it prepares to burst the cell open."

MLKL resides inside the cell, which may seem like an error on evolution's part; why plant an explosive in life's inner sanctum? But MLKL is tightly regulated, and requires multiple green lights before it's cleared to pulverize. Even if all other proteins and signaling molecules prepare MLKL for destruction, IP6 has the final say. If IP6 doesn't bind, MLKL remains harmless, like a cotton ball floating inside the cell.

When it's not killing cells, MLKL exists as multiple units, separate from one another. But when IP6 binds to one of these units, the protein gathers itself up into one functional complex. Only then, as a whole, is MLKL a full-fledged killer. It's like a grenade split into its component parts. None of them are functional on their own. But put back together, the tiny bomb is ready to inflict damage.

"We've come to realize that, after the cell explodes, there are these 'alarm' molecules that alert the immune system," the lead author said. "When the cell releases its contents, other cells pick up on these cautionary molecules and can either shore up defenses or prepare for necroptosis themselves."

\In their quest to understand exactly how necroptosis occurs, researchers performed an unbiased genetic screen, in which they scoured the entire genome for genes that seemed to be particularly critical toward the end of the pathway, where they knew MLKL took action. Before the IP6 finding, it was known that an intricate pathway impinged on MLKL. But only through this special genetic screen, in which they systematically tested the function of every gene at this end stage, were they able to see that IP6 was the key to necroptosis.

Their screen revealed that IP6 binds with especially high specificity. Other similar versions of inositol phosphate, such as IP3, didn't pass muster, and when bound to MLKL had no effect. For conditions like irritable bowel disease, in which erroneous necroptosis contributes to the severity of the disease, it would be desirable to disable IP6 from binding under those conditions. Perhaps blocking the binding site, or tricking MLKL into binding to one of the other versions of inositol phosphate, could do the trick. Either way, researchers are now digging further into the structure of IP6 bound to MLKL to better understand exactly how the killer is unleashed.