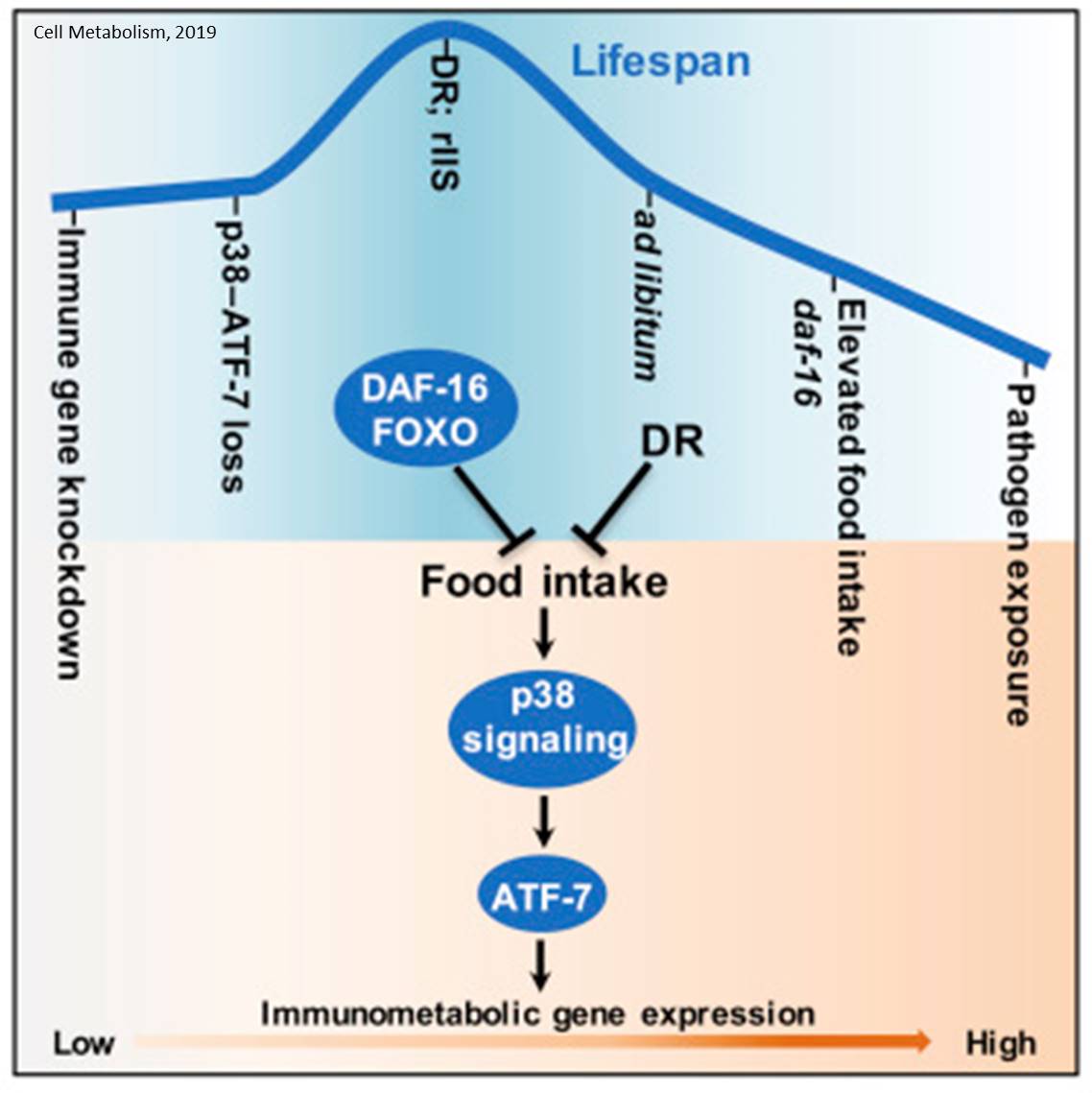 Scientists have known for decades that caloric restriction leads to a longer lifespan. It has also been observed that chronic inflammation increases with age. But any relationship between the two had remained unexplored.

But in a new study, published in Cell Metabolism, researchers have uncovered a new mechanism of lifespan extension that links caloric restriction with immune system regulation.

"Modulating immune activity is an important aspect of dietary restriction," says the senior author on the paper. "And it is important for longevity regulation and, in this context, increasing lifespan."

In this study, the team found that caloric restriction reduces levels of innate immunity by decreasing the activity of a regulatory protein called p38, triggering a chain reaction effect ending in a reduced immune response.

Innate immunity is like the security guard of the body, keeping an eye out for any unwelcome bacteria or viruses. If the innate immune system spots something, it activates an acute immune response. We need some degree of both kinds of immunity to stay healthy, but an overactive innate immune system--which occurs more often as we age--means constant low-grade inflammation, which can lead to myriad health issues.

"Before this study, people looked what happens to immunity to aging in humans, but no one had ever looked in any organism at whether modulating immunity or its activities is involved in lifespan extension or can be beneficial as part of an anti-aging program," says the senior of the study.

The research was conducted in the microscopic nematode worm C. elegans. The most fundamental genes and regulatory mechanisms found in these worms are typically simpler versions of those present in humans, making them a good model for studying human aging, genetics, and disease.

"That was the most surprising thing we found. The pathway was down regulated even though it was critical," says the senior author.

That this immune-regulating response was activated by nutrients, rather than bacteria, was also surprising. This adds to a growing body of evidence tying metabolism to the immune system.

"This is really an emerging field in mammals now, so called immunometabolism--the idea that there are ancient links between metabolism and immunity," says the senior author. "We were able to show in this really very primitive immune system that it is regulated metabolically, and affects lifespan and health independently of an anti-pathogen function. That is when I started calling this a primitive immunometabolic pathway or an immunometabolic regulation."

After making this discovery, the team was curious to know if the well-known longevity mechanism of reduced IGF1 signaling also acted on the immune system. For over 20 years, study after study in many different organisms have confirmed that lower levels of IGF1 signaling contributes to a longer lifespan. This is thought to be due to the activation of protective factors by a protein called FOXO (called DAF-16 in C. elegans).

In this new study, the team discovered that when IGF signaling was reduced in the worms, the chain reaction set off by the FOXO-like DAF-16 not only boosted protective mechanisms, but also led to a reduction of the worms' appetites. This naturally put the subjects in a state of caloric restriction.

"This links the growth mechanism [of IGF1 signaling] to food consumption and food seeking behavior in a big way," says the senior author.

A reduction in the activity of the FOXO-like gene seems to tell the worms that they are in a fasting-like state, and that nutrients may be scarce. This directs the worms to conserve energy, leading to a reduction in food intake. This self-imposed caloric restriction then leads to the lowering of the innate immune response. The senior author  plans to further study how the FOXO protein acts to suppress appetite, and to understand whether that might eventually lead to drug development.

The genes responsible for the phenomena observed in this study are conserved in humans. This opens up the possibility of human medical applications, from optimizing the immune system to drug development for appetite control.

"The ultimate goal is to be able to manipulate healthy lifespan in a person," says the senior author. "Not to make people live to 120, 130, but to extend the period of healthy life. And chronic inflammation is a major factor in human aging. The hope is that some of the specific mechanisms could translate to optimizing immune function in humans during aging to enhance health in human lifespan."