e-Cigarettes trigger inflammation in the gut 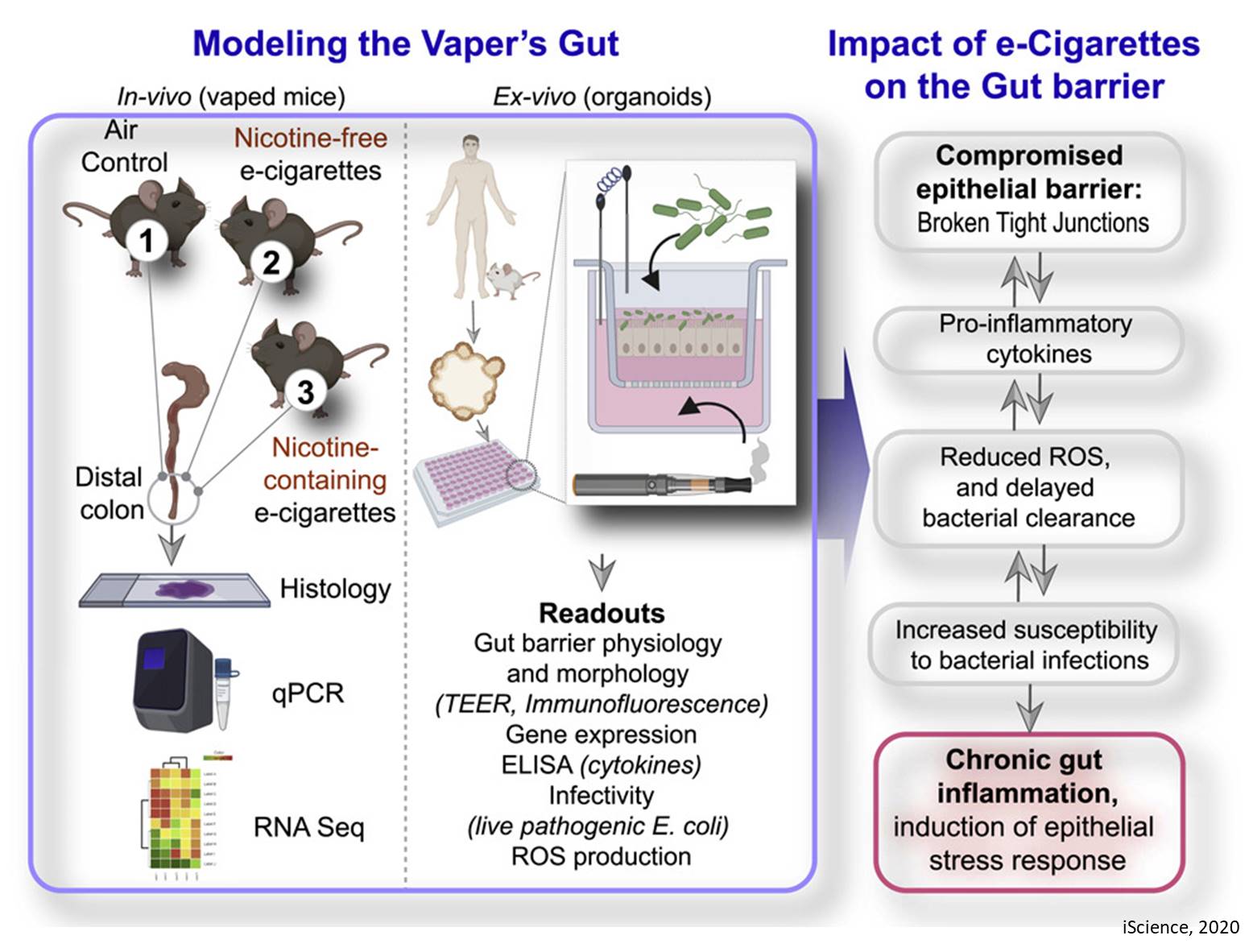 Touted by makers as a "healthy" alternative to traditional nicotine cigarettes, new research indicates the chemicals found in e-cigarettes disrupt the gut barrier and trigger inflammation in the body, potentially leading to a variety of health concerns.

In the study, published in the journal iScience, researchers found that chronic use of nicotine-free e-cigarettes led to a "leaky gut," in which microbes and other molecules seep out of the intestines, resulting in chronic inflammation. Such inflammation can contribute to a variety of diseases and conditions, including inflammatory bowel disease, dementia, certain cancers, atherosclerosis, liver fibrosis, diabetes and arthritis.

"The gut lining is an amazing entity. It is comprised of a single layer of cells that are meant to seal the body from the trillions of microbes, defend our immune system, and at the same time allow absorption of essential nutrients," said the author. "Anything we eat or drink, our lifestyle choices in other words, has the ability to impact our gut microbes, the gut barrier and overall health. Now we know that what we smoke, such as e-cigarettes, negatively impacts it as well."

The researchers found that two chemicals used as a base for all e-cigarette liquid vapor -- propylene glycol and vegetable glycerol -- were the cause of inflammation.

"Numerous chemicals are created when these two are heated to generate the fumes in vaping that cause the most damage, for which there are no current regulations," said the author. "The safety of e-cigarettes have been debated fiercely on both sides. Nicotine content, and its addictive nature, has always been the major focus of those who argue against its safety, whereas lack of chemicals in the carcinogens that are present in the cigarette smoke has been touted by the makers of e-cigarettes when marketing these products as a 'healthy alternative.' In reality, it's the chemicals making up the vapor liquid that we should be more concerned about as they are the cause of gut inflammation."

For the study, the team used 3D models of human intestinal tracts generated from patient cells and simulated what happens when e-cigarette vapors enter the gut lining. Researchers validated the findings using mice models of vaping.

To produce the 3D gut organoids, the researchers collected stem cells from patients' biopsies during colonoscopies and grew them in vitro. The stem cells differentiated into the four different cell types that make up the gut lining. The team then exposed the organoids to e-cigarette liquid vapor, mimicking the frequency of a chronic vaper.

They noted that epithelial tight conjunction markers, which are zipper-like proteins that form the gut's first physical barrier, began to break or loosen, causing pathogens from the vapor to seep into the surrounding immune system, wreaking havoc on protective epithelial cells that lie just beneath.

Such cells act as a defense against infection by clearing pathogenic microbes and initiating certain immune responses in the body. When exposed to the e-cigarette liquid, the cells were quickly overwhelmed, unable to effectively clear pathogens, resulting in gut inflammation.

"This is the first study that demonstrates how chronic exposure to e-cigarettes increases the gut's susceptibility to bacterial infections, leading to chronic inflammation and other health concerns," said the author. "Given the importance of the gut barrier in the maintenance of the body's immune homeostasis, the findings provide valuable insight into the potential long-term harmful effects chronic use of e-cigarettes on our health."

The damage to the gut lining may be reversible over time if the inciting factor, in this case e-cigarette use, is eliminated, but the effects of chronic inflammation upon other organs, such as the heart or brain, may be irreversible. In the futurethe authors plan to look at different flavorings of e-cigarettes to determine what effects they might have on the gut.