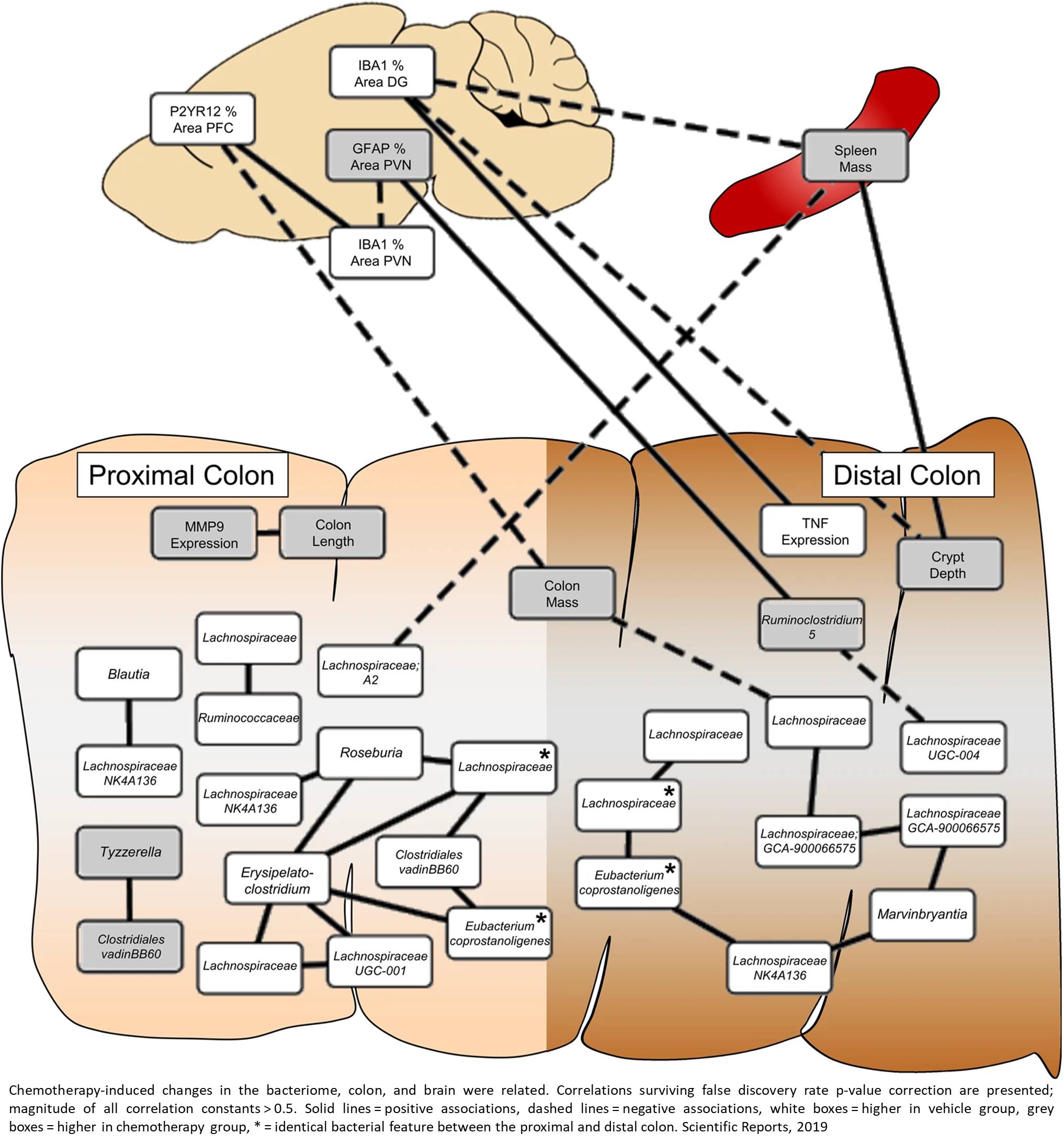 In a new study, scientists observed several simultaneous reactions in mice given a common chemotherapy drug: Their gut bacteria and tissue changed, their blood and brains showed signs of inflammation, and their behaviors suggested they were fatigued and cognitively impaired.

The research is the first to show these combined events in the context of chemotherapy, and opens the door to the possibility that regulating gut bacteria could not only calm chemo side effects like nausea and diarrhea, but also potentially lessen the memory and concentration problems many cancer survivors report.

More research is needed to further understand how the chemo-modified gut influences the brain in a way that can have an impact on behavior. The same lab is continuing mouse studies to test the relationship and running a parallel clinical trial in breast cancer patients.

"This is the first time anyone has even looked to see if there's a link between the gut symptoms and the brain symptoms associated with chemotherapy," said lead. "There have been studies in humans that indicate that chemo alters microbes in the gut, and our study in mice had similar results.

"We were able to see that there are brain changes at the same time as the gut changes. We also looked at inflammation, and yes, there are all these changes happening at the same time. So there are correlations, and now we're looking into causality." The study is published today in the journal Scientific Reports.

For this study, female mice received six injections of the chemotherapy drug paclitaxel and a control group of mice received placebo injections. Compared to the controls, the treated mice lost weight and showed signs of fatigue, and their performance on tests suggested they had memory loss.

The treated animals' guts, blood and brains were also affected in ways not seen in the control mice. The mix of bacteria in the gut microbiome changed, and the tissue lining the colon became abnormally extended. Specific proteins were present in circulating blood and the brain - along with activated immune cells in the brain - all indicating the immune system was busy producing a total-body inflammatory response.

The sequence of events suggested all these physiological changes were related: The gut was showing signs of permeability, meaning bits of bacteria could slip out of tight junctions in the intestine, an event that triggers an immune system attack. When the brain detects through the blood and neural signals that the body's immune system is activated, the brain responds in kind with its own inflammation. And brain inflammation is the culprit behind the "mental fog" symptoms known as chemo brain.

The team tested all the data for associations and found the strongest correlations between changes in the gut microbes and in the colon lining and the activation of immune cells called microglia in the brain.

"Every time chemo reduced bacteria in the gut, that reduction was correlated with these cells in the brain," said the lead.

Confirmation of these connections could lead to interventions for cancer patients - either dietary strategies such as probiotics or prebiotics or possibly fecal transplantation - to promote bacteria and conditions in the gut that protect the brain from inflammation, which should reduce chemo brain symptoms.

"This is just the first step of trying to broach the concept to see if these harsh gut effects of chemo have anything to do with chemo brain. It looks like it has potential," the lead said.