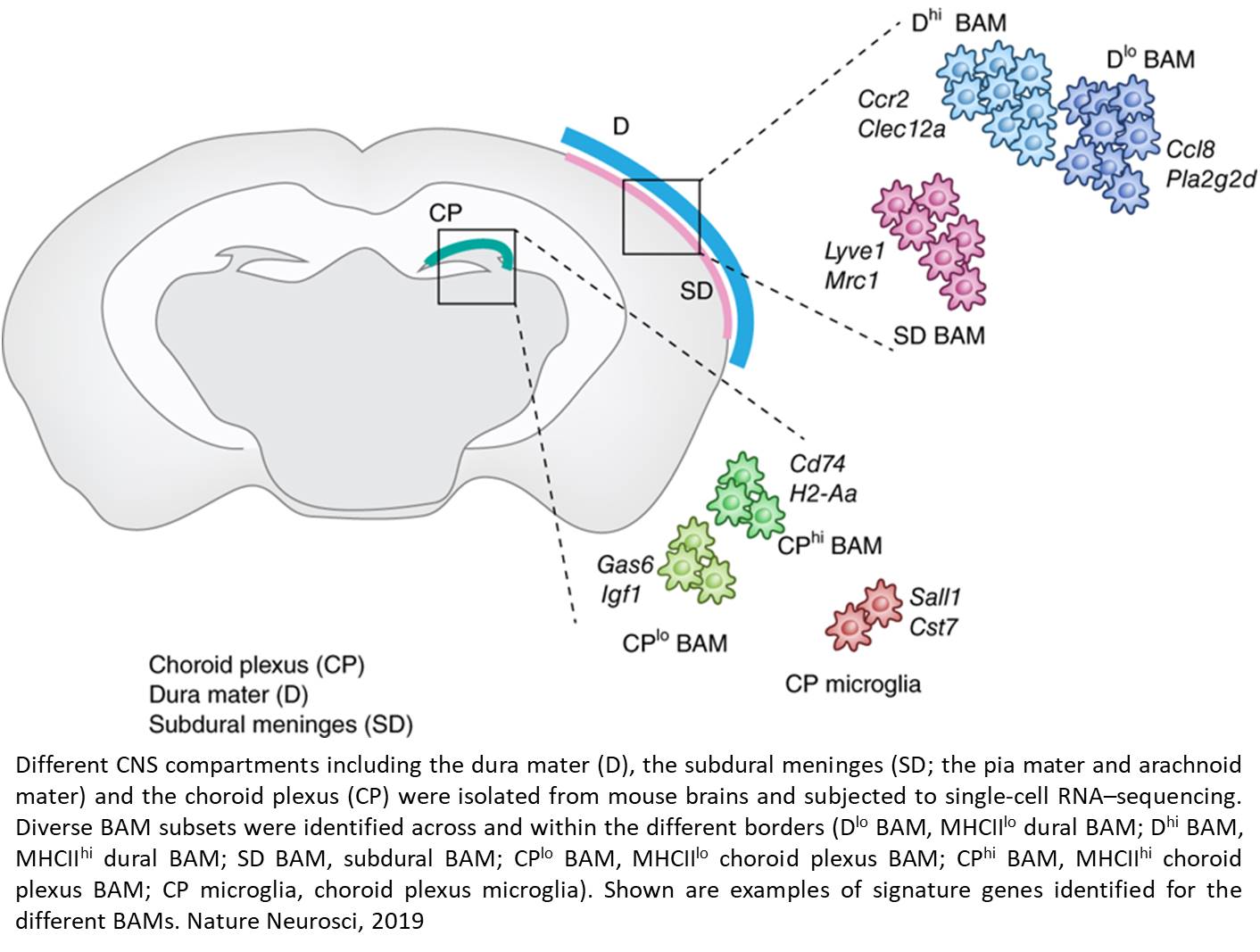 Our brains do not only contain neurons, but also a variety of immune cells that play an important role for its functioning. A team has developed a comprehensive cell atlas of the brain's immune compartment. This revealed not only the striking diversity of brain macrophages, but also found microglia where they were not expected. Remarkably, these 'hidden' microglia showed a clear resemblance to microglia that are normally associated with neurodegenerative disorders such as Alzheimer's disease. The new insights are important for better understanding the role of macrophages in healthy brain physiology and for developing future treatments for neurodegenerative diseases.

Macrophages - a type of immune cell - in the brain were first discovered 100 years ago by the Spanish scientist Pío del Río-Hortega. Most brain macrophages are known as microglia. These cells are in close contact with neurons and are critical for the proper development and functioning of the brain. But beyond the microglia, our brains house several other types of macrophages, many of which are relatively unknown.

The more elusive border-associated macrophages (BAMs) have received limited attention, and their roles in CNS integrity and disease remain largely unknown. These non-parenchymal macrophages reside in the dura mater, which is the most outer meningeal layer; the subdural meninges, comprising arachnoid and pia mater; the choroid plexus residing in the ventricles; and the perivascular spaces. Until recently, BAMs and microglia could not be unambiguously distinguished because they share common macrophage markers. However, several recent studies have analyzed brain macrophages at the single-cell level, revealing new markers for BAMs. The current study further demonstrates regional differences in the BAM landscape and discovered a novel microglia population in the choroid plexus.

To reveal the heterogeneity of macrophages across various brain regions, the researchers relied on a method for analyzing the gene expression of thousands of individual cells. In total, the researchers analyzed more than 60,000 single cells, which originated from healthy mouse brains, an Alzheimer's disease mouse model, and from mice with an important genetic mutation that affected their immune system.

"Our results show that the appearance of brain macrophages can strongly vary depending on their anatomical niche, suggesting that they fulfill a broad set of functions" says first author of the study. An unexpected finding was the presence of microglia that were sticking to the borders of the choroid plexus, a network of cells in direct contact with the cerebrospinal fluid. These choroid plexus microglia showed a similar activation state as microglia that come in contact with toxic amyloid deposits, a typical feature of Alzheimer's disease.

Of note, many of the previously identified microglia signature genes proved to be specific to microglia (for example, Sall1, Slc2a5, Serpine2, Adgrg1, Sparc, Adamts1). However, other characteristic microglia genes were also enriched in BAMs (for example, Fcrls, Hexb, Olfml3, Tmem119), suggesting that expression of these genes is shared by several subsets of CNS macrophages.

In addition to the microglia signature, these unique choroid plexus microglia were also enriched for genes involved in lipid metabolism and phagocytosis (for example, Apoe, Trem2). The authors further demonstrate a remarkable resemblance to the transcriptional profile of disease-associated microglia (DAMs) as described in different models of neurodegeneration. DAMs are shown to alter their homeostatic profile in response to pathology, possibly to restrict neurodegeneration. That a microglia population outside the parenchyma in a healthy, neuron-free environment has a similar gene expression profile is intriguing. It will be interesting for future studies to define local triggers inducing this molecular profile and to address the function of this special microglial subset.