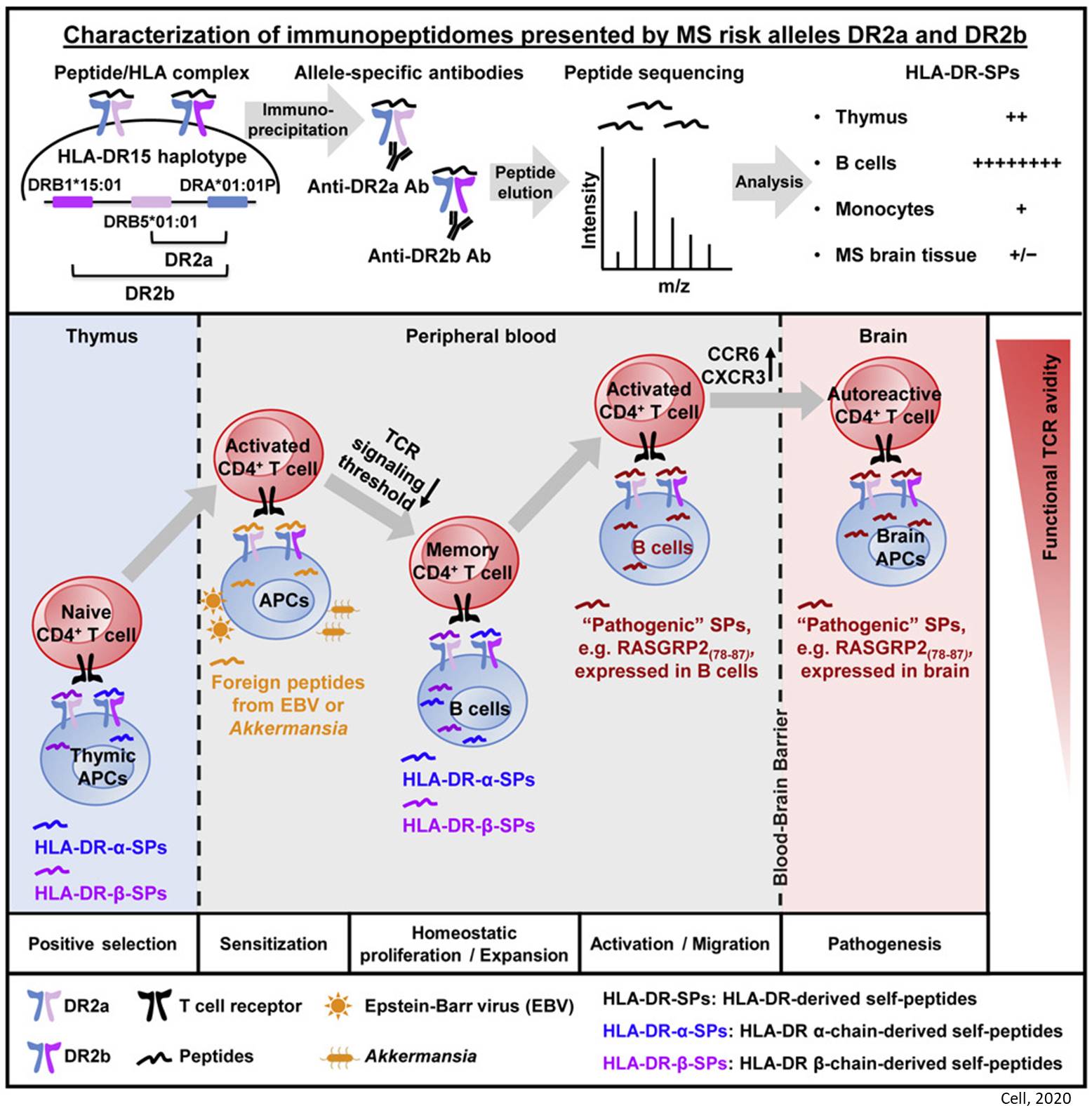 About half of the people with multiple sclerosis have the HLA-DR15 gene variant. A study has now shown how this genetic predisposition contributes to the development of the autoimmune disease multiple sclerosis in combination with environmental factors. The decisive factor is the shaping of a repertoire of immune cells which - although they are effective in fighting off pathogens such as Epstein-Barr virus - also attack brain tissue.

Multiple sclerosis is an autoimmune disease that damages the brain and the spinal cord and often severely limits a person's quality of life. It affects about 2.5 million people worldwide, most of them young adults. The cause of the disease is a complex interaction between genetic factors and environmental influences such as smoking or infections.

For almost 50 years now, it has been known that a gene variant called HLA-DR15 is strongly associated with multiple sclerosis (MS). This gene variant is responsible for up to 60 percent of genetic risk. If carriers of this common gene (about a quarter of the healthy population is HLA-DR15 positive) are also infected with the Epstein-Barr virus and have a symptomatic course of infection called Pfeiffer's disease (also known as glandular fever or infectious mononucleosis), the risk of MS increases 15-fold.

The gene products of HLA-DR15 control how the adaptive immune system shapes an immune repertoire that allows the body to recognize and fight pathogens. One of the locations of HLA-DR15 molecules is on the surface of white blood cells. There, they present protein fragments from bacteria, viruses and body cells to the T lymphocytes of the immune system.

The T lymphocytes - which later control the immune response - learn to distinguish between foreign proteins and the body's own tissue. This individual training of immune cells takes place first in the thymus and then in the blood. Since there are many more possible pathogens than T lymphocytes, each T lymphocyte must be able to respond to many different antigens and probably also many different pathogens.

The researchers first investigated which fragments HLA-DR15 captured and presented to the immune cells. To do this, they used two novel antibodies that recognize the two variants of HLA-DR15 that occur in MS patients with a very high level of specificity. They found that the HLA-DR15 molecules in the thymus mainly present fragments of themselves. This is new information that was not previously known.

The T lymphocytes that have been trained in this way then migrate into the blood. There, they also learn to recognize fragments of the Epstein-Barr virus if the carrier of the genetic variant becomes infected with it. The fragments from the virus have a much stronger activating effect than the HLA-DR15 fragments.

As a result, the T lymphocytes not only keep virus-infected cells in check, but can also migrate to the brain and react with the body's own proteins that trigger an autoimmune reaction in the case of MS. Nearly 100 percent of people with MS are infected with the Epstein-Barr virus. It is the greatest environmental risk factor for MS. The researchers also often found a reaction to fragments of the intestinal bacterium Akkermansia muciniphila, which occurs in abnormally high numbers in MS patients.

Summarizing, the author states that "The most important genetic risk factor for MS therefore shapes a repertoire of T lymphocytes that responds very well to certain infectious agents such as Epstein-Barr virus and intestinal bacteria." However, as the experiments have shown, this group of T lymphocytes also reacts to proteins found in the brain by way of a kind of cross-reactivity. "The disadvantage of this fitness is therefore that those affected also become susceptible to an immune response against their own brain tissue, which can lead to multiple sclerosis."

Therefore, these results have for the first time illustrated how the combination of genetic predisposition and certain environmental factors can trigger an autoimmune disease. "Our work has shed light on mechanisms that are likely to play a role in a number of other autoimmune diseases," says the author. "In addition to improving our understanding of underlying causes of the disease, this could also lead to the development of new treatments". Yeast made to produce cough suppressant