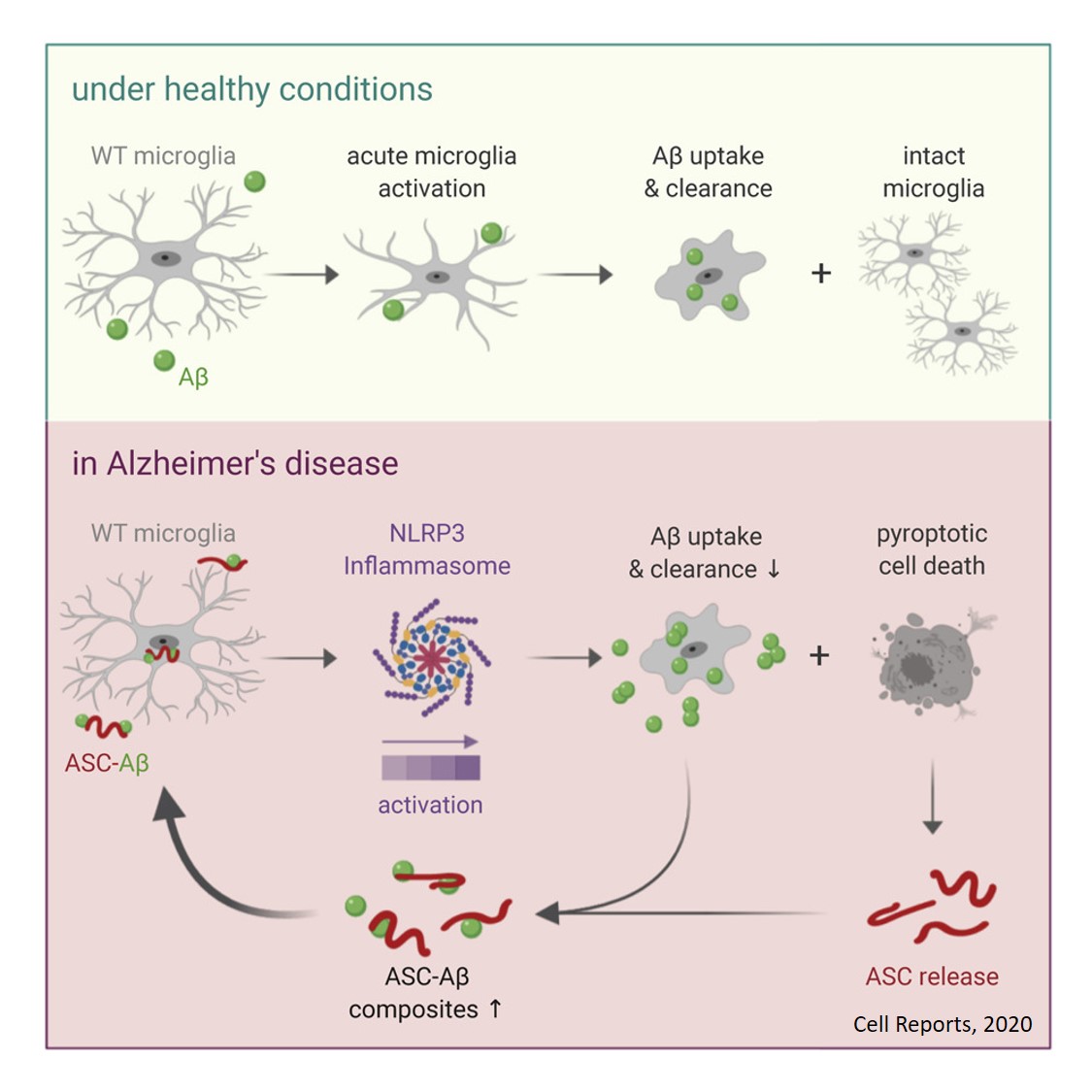 An immune reaction in the brain seems to play a major role in the development of Alzheimer's disease. In a way, it "adds fuel to the fire" and apparently causes an inflammation that, in a sense, keeps kindling itself. The study has now been published in the journal Cell Reports.

Alzheimer's disease is characterized by clumps of the protein Aß (amyloid beta), which form large plaques in the brain. Aß resembles molecules on the surface of some bacteria. Over many millions of years, organisms have therefore developed defense mechanisms against such structures. These mechanisms are genetically determined and therefore belong to the so-called innate immune system. They usually result in certain scavenger cells absorbing and digesting the molecule.

In the brain, the microglia cells take over this role. In doing so, however, they trigger a devastating process that appears to be largely responsible for the development of dementia. On contact with Aß, certain molecule complexes, the inflammasomes, become active in the microglia cells. They then resemble a wheel with enzymes on the outside. These can activate immune messengers and thereby trigger an inflammation by directing additional immune cells to the site of action.

"Sometimes the microglia cells perish during this process," explains the senior author. "Then they release activated inflammasomes into their environment, the ASC specks."

These released specks take on a calamitous dual role: On the one hand, they bind to the Aß proteins and make their degradation more difficult. On the other hand, they activate the inflammasomes in even more microglia cells, and much more than Aß alone would do. During this process, more and more ASC specks are released. It thus adds fuel to the fire, as it were, and thereby permanently stokes up the inflammation. "As a result, a fundamentally useful immune mechanism becomes an essential factor in the development of Alzheimer's disease," emphasizes the senior author.

It is actually desirable that ASC specks remain active after cell death: They can then be taken up and used by other immune cells. "These then do not have to produce their own inflammasomes, which means that they can react more quickly to a bacterial infection, for example," says the author. In the brain, however, this mechanism is of little benefit: Nerve cells constantly produce small amounts of Aß. It is possible that these deposits only become a serious threat to brain function in combination with the ASC specks.

The scientists hope that a better understanding of these processes might also lead to the development of new therapeutic approaches. This is because the accumulation of Aß probably begins decades before the first symptoms of disease appear. Early intervention may be able to slow down this fateful process. "This might make it possible to treat Alzheimer's disease preventively in the future, so that there is no impairment of mental performance in the first place," hopes the senior author. 3D Structure of a Promising Molecular Target for Cancer Treatment