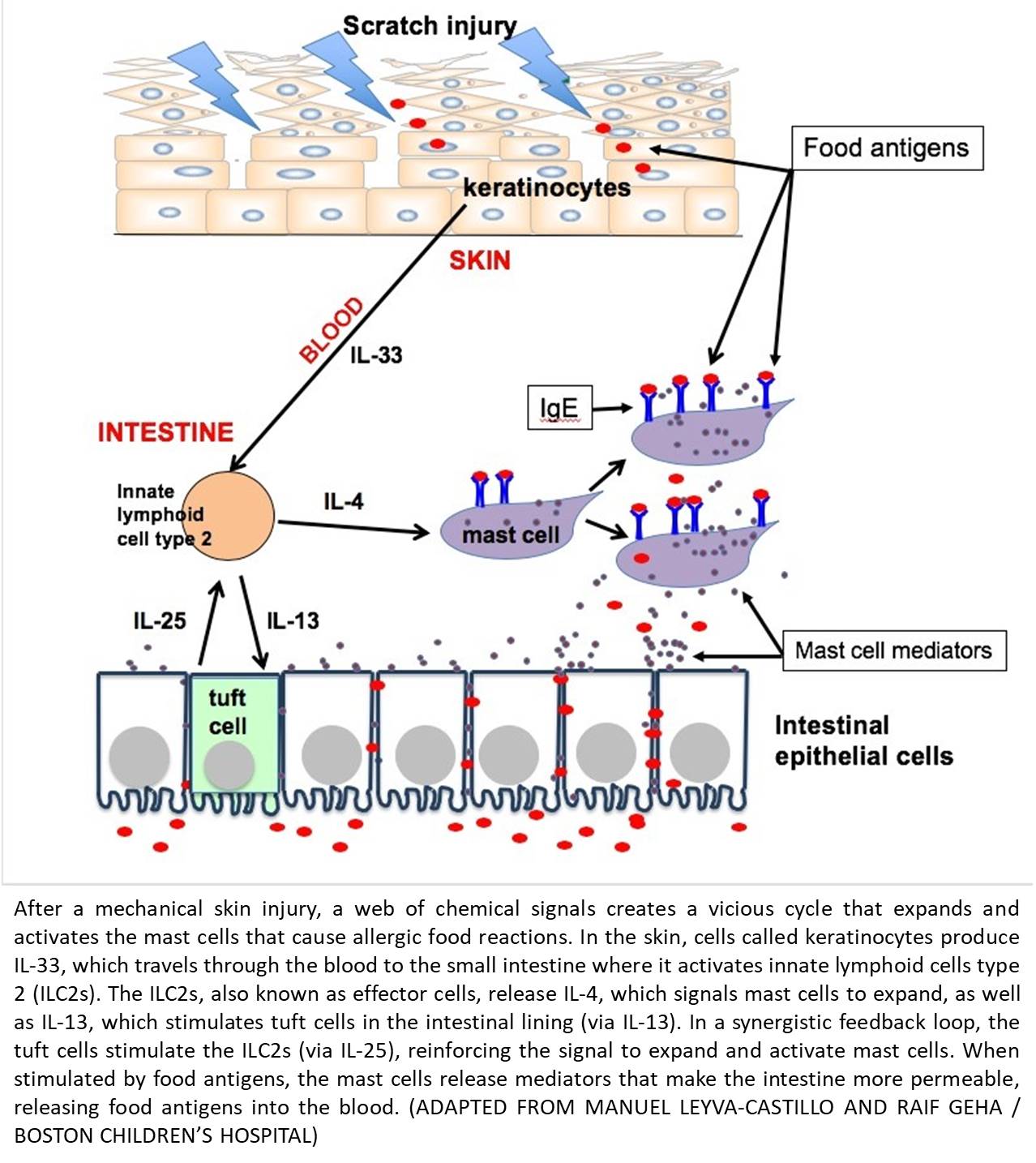 Eczema, a chronic itchy inflammatory skin disease, affects about 15 percent of U.S. children. It's a strong risk factor for food allergies -- more than half of children with eczema are allergic to one or more foods -- and most people with food allergy have eczema. But the connection between the two hasn't been clear. New research in a mouse model, published in the journal Immunity, shows for the first time that scratching the skin promotes allergic reactions to foods, including anaphylaxis.

Babies, classically messy eaters, tend to rub their food on their skin. If they also have eczema, food antigens can get into the body through skin breaks caused by scratching. The immune system then produces IgE antibodies against the food.

"That's how they get sensitized," says the senior author. How sensitive, "depends on how much they scratch" the author says.

Once formed, the IgE antibodies bind to immune cells known as mast cells. When food is ingested, mast cells fire off chemicals that act on tissue to produce an allergic response.

But there's been a mystery: while people with food allergy have high levels of IgE antibodies in their blood, not all people with IgE antibodies are food-allergic. Also, while mast cells fire when stimulated by IgE and allergen, the strength of this firing varies between individuals.

"Our question was, what is the determinant of anaphylaxis?" says the senior author.

The study shows how mechanical skin injury provides the necessary push to fully rev mast cells up. In the mouse model, the researchers showed that skin breaks (created by stripping off a piece of tape, rather than scratching) spark a chain reaction in the distant small intestine, expanding and activating the mast cells that spur allergic reactions (see schematic).

Tape stripping increased the permeability of the intestine, making it easier for allergens to be absorbed into the blood circulation. This caused the mice to have anaphylactic reactions when fed foods they were sensitized to, as evidenced by a drop in body temperature and markers in their blood. Mice that were similarly sensitized but did not undergo tape stripping had less severe allergic reactions.

The bottom line is that your mother was right: If you have eczema, you shouldn't scratch.

"The skin is the major portal for food allergy sensitization," says the senior author. "You have to seal the skin and give medications to reduce the itching."

Like many clinicians, the authors also recommend keeping the skin moist after a bath and sealing it with an emollient, commercial products or even Crisco, margarine or olive oil. Dry skin is more prone to both itching and mechanical injury from scratching.

It may seem strange that there would be crosstalk between the skin and the intestine. But the senior author speculates that food allergy is "collateral damage" from an immune mechanism designed to protect against intestinal parasites entering the body through the skin.

"Mast cells are very important in getting rid of parasites in the gut," the senior author says.