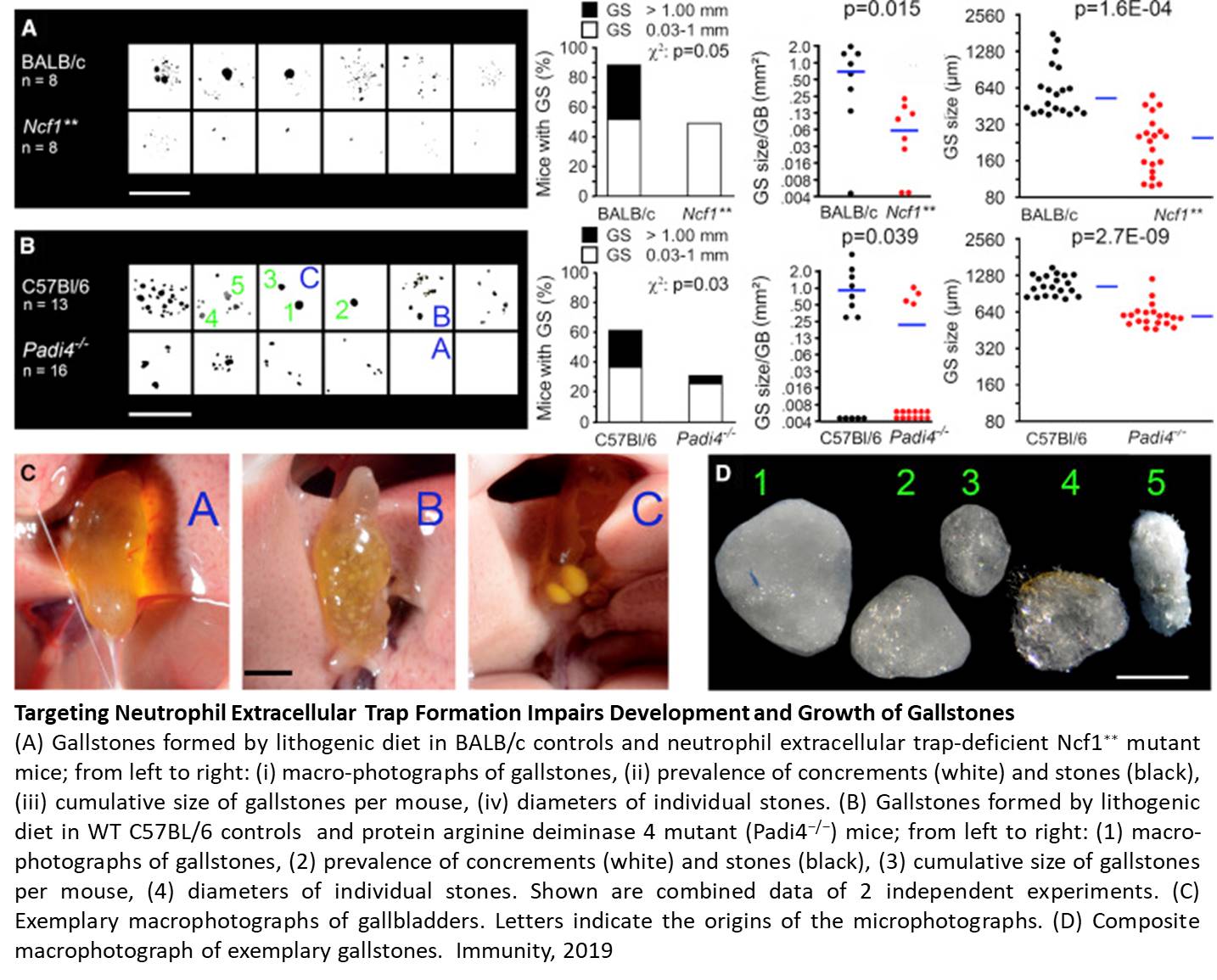 Sticky meshworks of DNA and proteins extruded by white blood cells called neutrophils act as the glue that binds together calcium and cholesterol crystals during gallstone formation, researchers report in the journal Immunity. Both genetic and pharmacological approaches that inhibited the formation of these so-called neutrophil extracellular traps (NETs) reduced the formation and growth of gallstones in mice.

"Neutrophils have long been considered the first line of defense against infection and have been shown to generate NETs that entangle and kill pathogens," says senior study author. "Here, we provide additional evidence for the double-edged-sword nature of these NETs by showing that they play an important role in the assembly and growth of gallstones. Targeting neutrophils and NET formation may become an attractive instrument to prevent gallstones in high-risk populations."

Gallstones are hard, pebble-like pieces of material that may be as small as a grain of sand or as large as a golf ball. They form in a pear-shaped organ called the gallbladder, which releases bile to the small intestine through the bile ducts during meals to help break down fat. Although most people with gallstones do not have symptoms, they can cause abdominal pain, nausea and vomiting, and they are a leading cause of hospital admissions worldwide. Surgery to remove the gallbladder is one of the most common operations performed on adults in the United States. Although medicines do exist, they may require months or years of treatment to break up all gallstones.

One hurdle limiting the development of new treatments is that scientists do not yet fully understand exactly how gallstones form. It has been known for decades that the precipitation of cholesterol and calcium salts in the bile is a prerequisite for gallstone formation. But it has not been clear what causes calcium and cholesterol crystals to stick together during gallstone assembly and growth.

A clue to this mystery came while the team was examining biliary sludge--small stones in the bile--extracted from human patients receiving stents. They observed large aggregates of DNA, as well as robust activity of neutrophil elastase--a secreted enzyme that helps break down proteins. The researchers also observed DNA patches and high neutrophil elastase activity on the surfaces of larger human gallstones. Together, these molecules are telltale signs of NETs--web-like structures extruded by neutrophils that help protect against infection but have also been implicated in autoimmune and inflammatory disorders. To determine what triggered NET formation, the investigators cultured cholesterol crystals with human neutrophils and observed the release of DNA from these cells.

To test whether NETs play a role in gallstone growth, the researchers mounted human gallstones to rotating and shaking devices and spun them in the presence or absence of neutrophil suspensions. In the presence of neutrophils, the gallstones rapidly collected DNA patches and neutrophil elastase on their surfaces. Additional experiments showed that NETs aggregated cholesterol and calcium crystals to form gallstones, and the DNA wrapped around the crystals and pulled them together to form larger stones.

To further examine the role of NETs and neutrophils in gallstone development, the researchers fed mice a cholesterol-rich diet that induced gallstone formation. The number and size of gallstones were smaller in mice with genetic defects that inhibited NET formation, and the size of gallstones was also smaller in mice with fewer neutrophils. In addition, the number and size of gallstones were reduced in mice whose diets were supplemented with either a compound that inhibits protein-arginine deiminase 4 (PAD4) --an enzyme involved in NET formation--or a beta blocker called metoprolol, which interferes with neutrophil migration and is also widely used for the treatment of high blood pressure and chest pain. Treatment with the PAD4-inhibiting compound or metoprolol also completely blocked the additional growth of pre-existing gallstones.

The authors say that the identification of neutrophils and NETs as culprits in gallstone formation and growth opens new avenues for therapeutic interventions. "The possibility of stopping these processes with new PAD4 inhibitors or with metoprolol--an established beta-blocker--may introduce new therapeutic strategies that avoid surgery," the author says. "However, human studies are required to establish new therapies for gallstone disease. Hopefully, we can convince pharmaceutical companies to perform a clinical study with inhibitors of NET formation or NET aggregation."