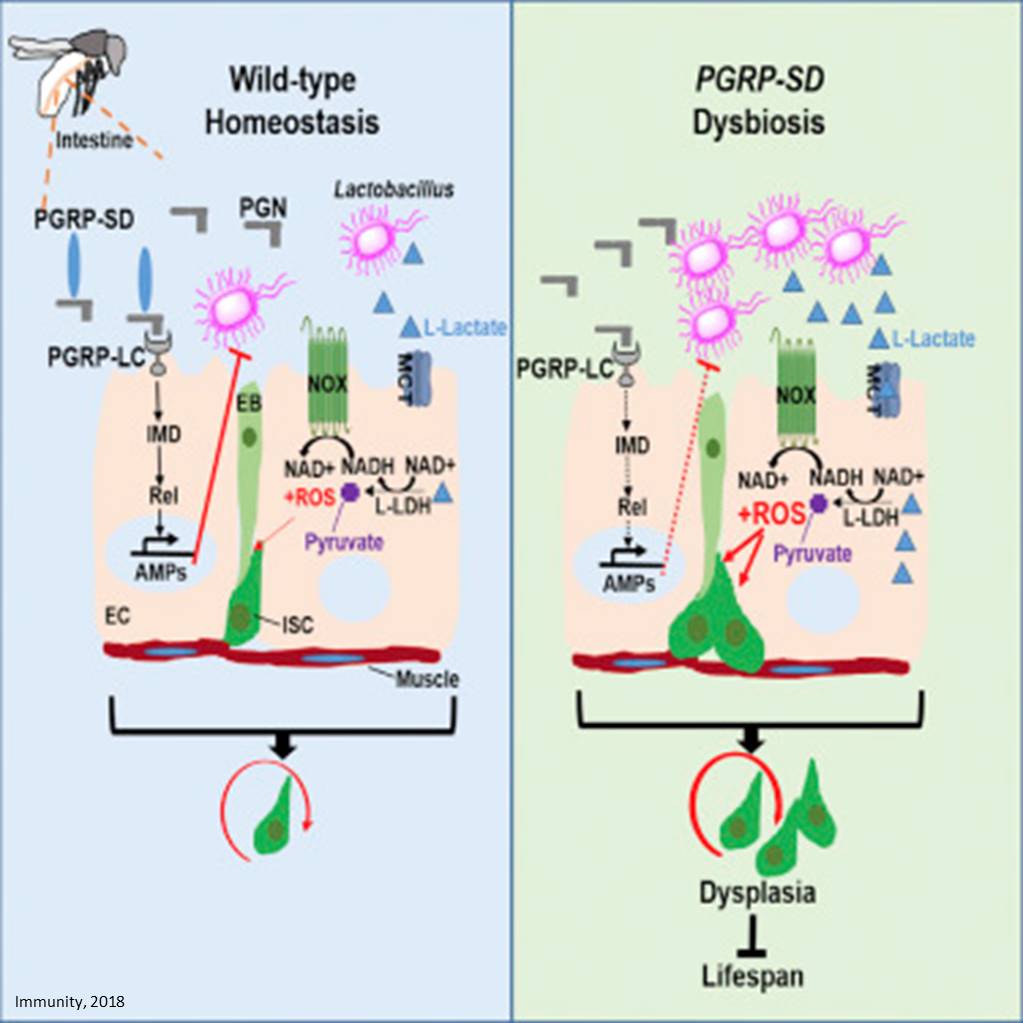 The different populations of gut bacteria, are sometimes called "commensal", and exist in virtually all animals, living under a certain functional balance. When this balance is disrupted - for example, because of disease or medication - this gives rise to a condition known as "commensal dysbiosis", which is associated with a number of pathologies and even a decreased lifespan. Despite this knowledge, little is known as how exactly the gut bacteria affect general health and vice versa.

Now, a scientist has discovered a mechanism by which problems of the immune system can cause commensal dysbiosis that in turn promotes age-related pathologies.

The team used the fruit-fly Drosophila melanogaster, which is often used to study the biology of gut bacteria. Because they wanted to explore the interplay between gut bacteria and the immune system, they focused on a receptor protein called "peptidoglycan recognition protein SD" (PGRP-SD). This protein belongs to a class of pattern-recognition receptors, and in 2016, researchers already showed that PGRP-SD detects foreign bacterial pathogens and turns the fly's immune system against them.

In the present study, the scientists turned off the gene for PGRP-SD, thus creating flies with disrupted immune system. The mutant flies proved to have shorter lifespans than normal ones, and when the researchers examined them, they found that they also had an abnormally high number of the gut bacterium Lactobacillus plantarum, a widespread species of bacteria that produce lactic acid.

Looking into the biological impact of this, the scientists found that the bacteria also produced an excessive amount of lactic acid. This, in turn, triggered the generation of reactive oxygen species, which cause damage to cells and contribute to the aging of tissues. In contrast, when the scientists increased the production of PGRP-SD, they found that it prevented commensal dysbiosis, and even extended the lifespan of the flies.

"Here we have a metabolic interplay between the commensal bacteria and the host," says the author. "Lactic acid, a metabolite produced by the bacterium Lactobacillus plantarum is incorporated and processed in the fly intestine, with the side-effect of producing reactive oxygen species that promote epithelial damage." The researchers speculate that similar mechanisms are taking place in the mammalian intestine.