In encephalitis, neurons turn against themselves 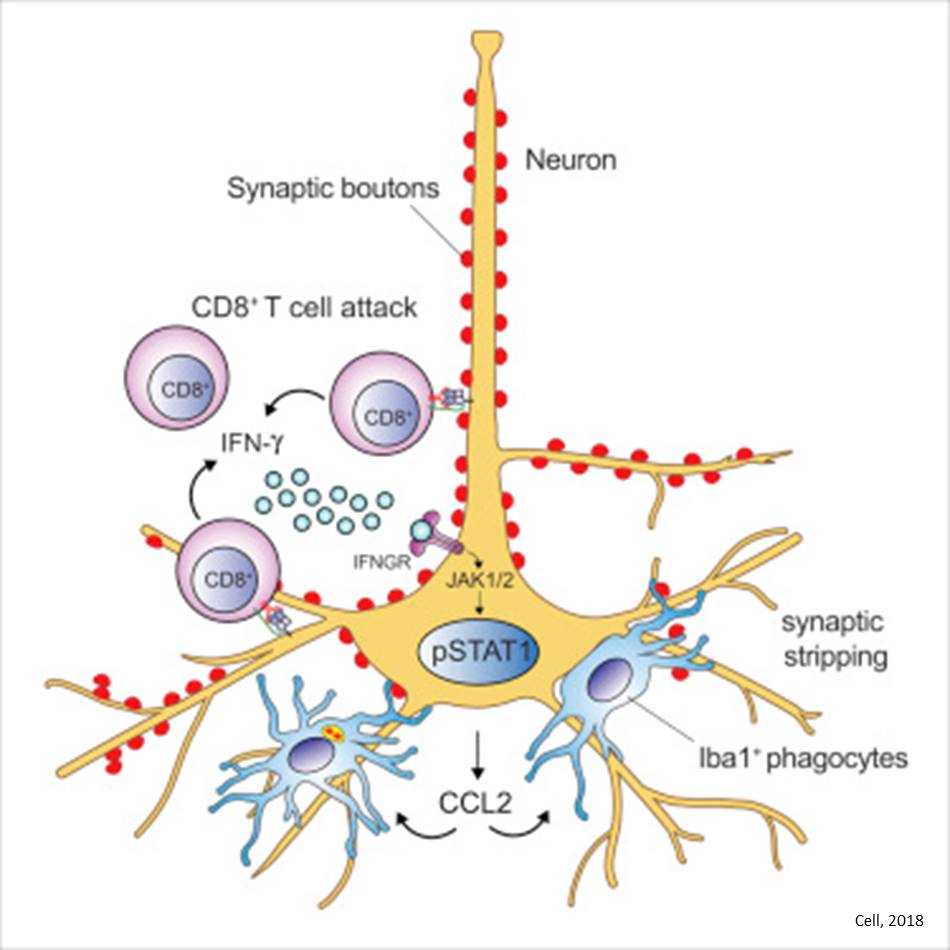 Rasmussen's encephalitis is a rare autoimmune disease that primarily affects children and can lead to seizures. As the disease is resistant to drug treatments, it frequently requires surgical interventions aiming to remove or disconnect the affected part of the brain. Researchers have now succeeded in describing and mastering the mechanisms at work within neurons in mice, opening the way to possible treatments. It was previously thought that neurons were the target of immune system cells that attack synapses, the connections between neurons. But researchers have discovered that the neurons themselves play an active role in triggering this process. Their research is published by Cell.

In Rasmussen encephalitis, like in other encephalitis, the presence of an antigen in the affected neurons triggers an immune system response, resulting in synaptic alterations. A team of researchers was able to show that neurons are not only passive victims of this attack, but play an essential role in triggering a defence mechanism that ultimately leads to their own damage. «Following the attack by CD8+ T lymphocytes of the immune system, which fight against viral infections, the neuron produces a chemical signal to other cells called phagocytes which then attack the synapses. It's a sort of tripartite tango with tragic consequences,» explains the author.

Triggered by the neuronal antigen, CD8+ T lymphocytes release a protein, IFN-γ, captured by corresponding neuronal receptor. Subsequently neurons activate the STAT 1 signalling pathway which leads to the production of a molecule called CCL2. The latter molecule diffuses into the neuronal environment where it activates other immune cell types called phagocytes: these are microglial cells present in the brain and macrophages derived from the blood circulation. These two types of phagocytes finally attack the synapses. «If we manage to cut off the signal emitted by the neuron, this whole cascade of causes and consequences could be blocked,» stresses the first author of the study.

A similar signalling signature could also be found in biopsies performed in more than 20 patients suffering from Rasmussen encephalitis, and researchers advocate that it is possibly identical for other forms of encephalitis. In mice experiments, this mechanism has been successfully blocked at different levels: The teams have thus succeeded in blocking the signalling pathway of STAT1 and CCL2 molecules, as well as the migration and activation of phagocytes by pharmacological interventions and genetic manipulation, avoiding in all these cases the degradation of synapses and allowing for a better control of the disease.

Researchers will now have to partner to pursue the development of a possible treatment and conduct the necessary clinical trials, a difficult task when it comes to rare diseases. «But the principles we are describing are probably at work in other diseases that cause a strong immune response, and may even play a role in multiple sclerosis,» says the author.