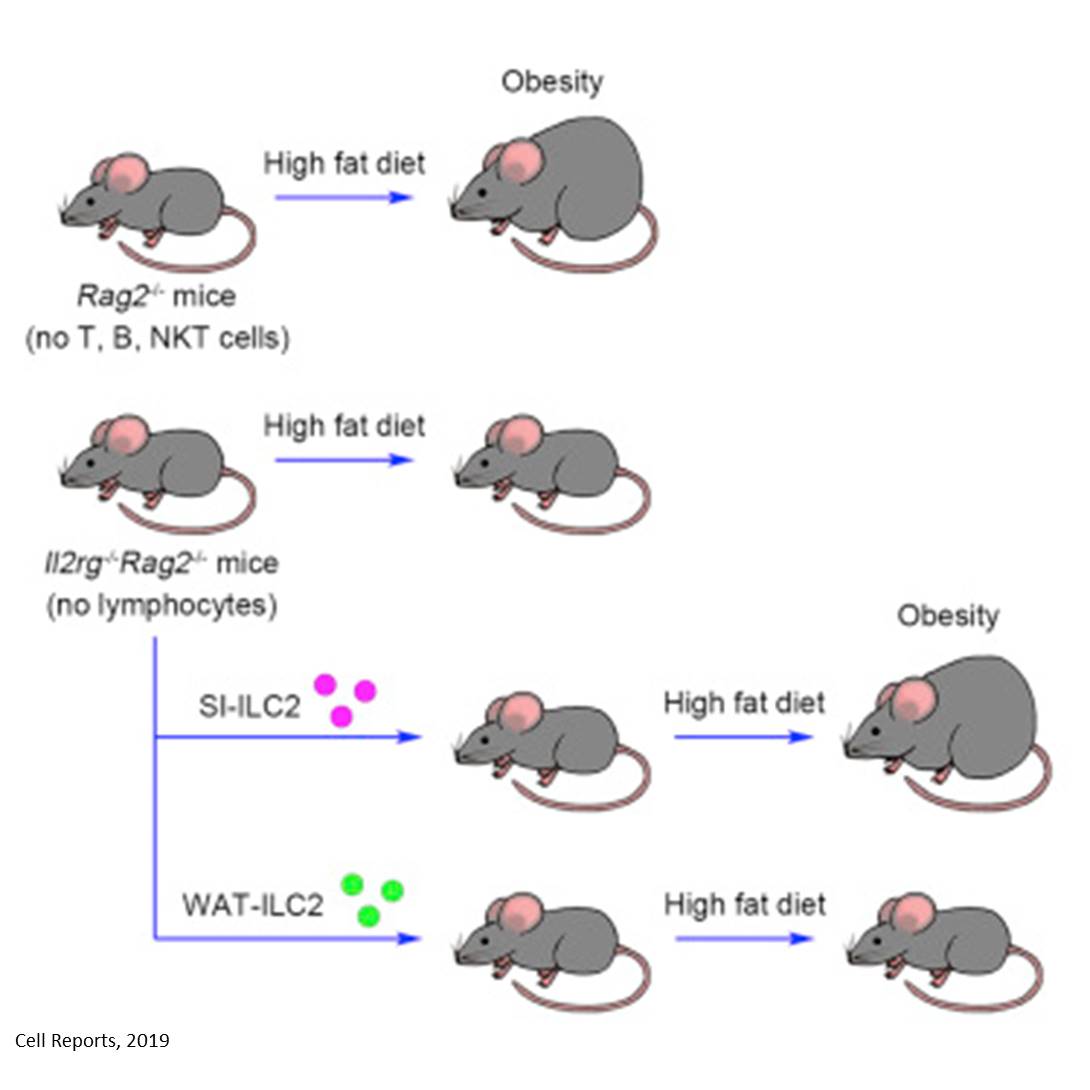 Why is eating a high fat diet a recipe for obesity? According to a new study the answer involves the activity of a specific type of immune cell that lives in the small intestine. Published in the journal Cell Reports, a series of experiments shows that without group-2 innate lymphoid cells (ILC2s) in the small intestines, mice can eat high-fat diets without gaining extra weight or suffering from other physiological symptoms of obesity.

Many factors can contribute to obesity, including individual genetics, gut bacteria, and diet. Recently, studies have shown that immune system activity can also have an effect, but the details are still unclear. The team designed an experiment using genetically engineered mice to determine the role of innate lymphoid cells--a type of white blood cell--in diet-related obesity.

The team examined two types of mice, both with missing immune cells. One type lacked acquired immune cells, but did not lack ILCs. The other type lacked all lymphocytes, including ILCs. Along with unmodified mice, they then fed the mice either a normal diet or a high-fat diet for 8 weeks. All mice showed mild weight gain on a normal diet. However, while normal mice and those missing acquired immune cells gained a tremendous amount of weight when given the high-fat diet, mice lacking ILCs did not. In fact, they stayed as lean as those who received the normal diet, even though they ate the same amount of high-fat food as the other two groups of mice.

Subsequent testing showed that mice lacking ILCs also failed to show other physiological signs of obesity, such as greater amounts of white fat tissue, larger livers, higher blood sugar levels, and impaired insulin resistance. In another experiment, researchers reintroduced ILCs into the ILC-deficient mice through a bone marrow transplant. After 2 months on a high-fat diet, they found that these mice now showed all the symptoms of obesity. With these findings, the team was confident that it was the lack of ILCs that had prevented diet-induced obesity

There are actually three groups of ILCs, and after testing mice with specific ILC deficits, the team found that those lacking group-2 ILCs were prevented from becoming obese after eating the high-fat diet. "This was surprising," explains first author. "In the past, ILC2s from white adipose tissue were shown to help prevent obesity. However, here we found that when they come from the small intestines, they actually promote obesity.

The researchers confirmed this finding by transferring white fat-ILC2s or small intestine-ILC2s into the mice lacking all ILCs. They found that only the mice who received ILC2s from the small intestine became obese after eating the high-fat diet.

"Now we know that despite a high-fat diet, diet-induced obesity can be prevented by eliminating small intestinal ILC2s," says the senior author. "This means that aside from controlling our diets, some function of these cells could be a potential target for obesity treatment. Our next step is therefore to determine how small intestinal ILC2s induce obesity."