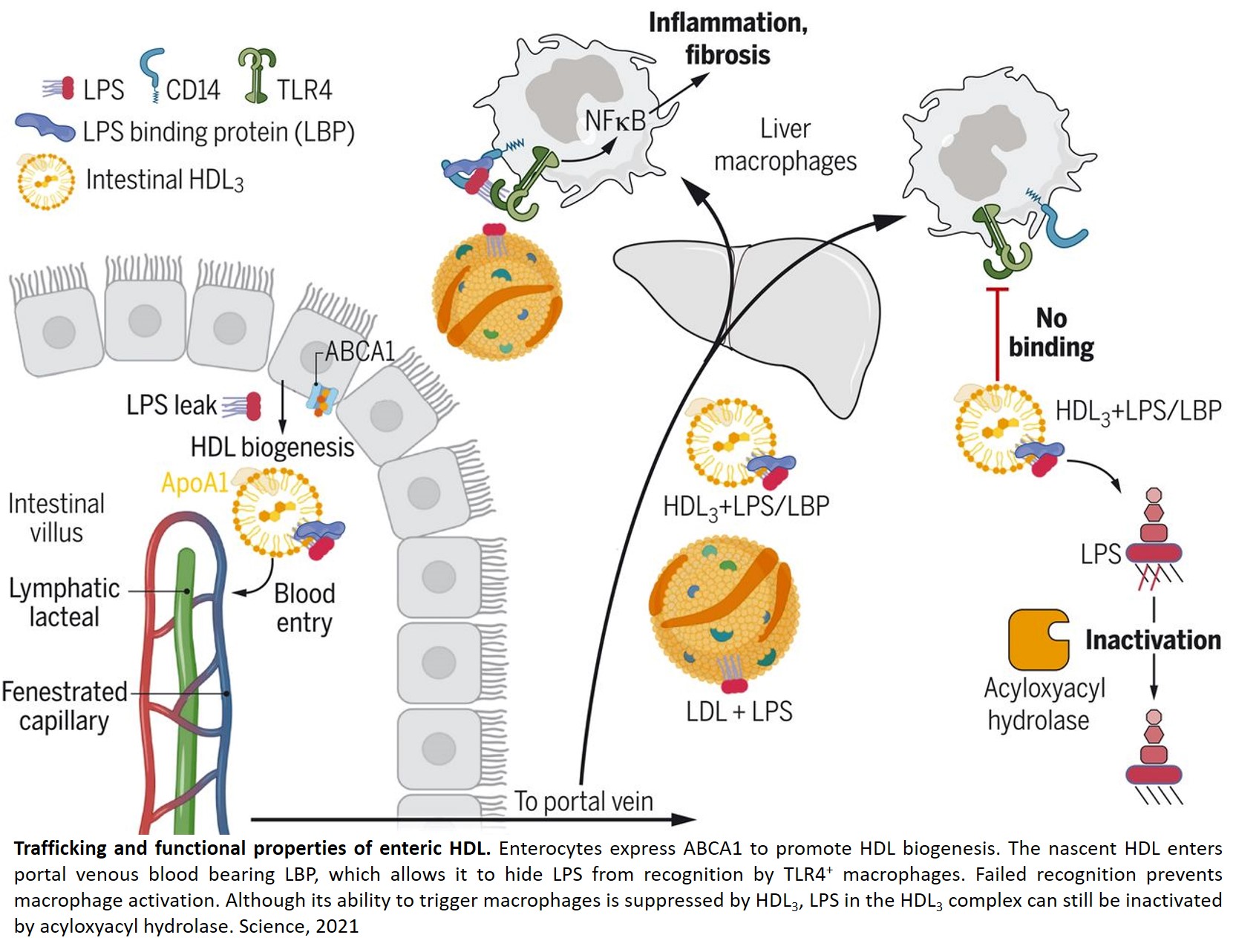 The body's so-called good cholesterol may be even better than we realize. New research suggests that one type of high-density lipoprotein (HDL) has a previously unknown role in protecting the liver from injury. This HDL protects the liver by blocking inflammatory signals produced by common gut bacteria. The study is published in the journal Science.

HDL is mostly known for mopping up cholesterol in the body and delivering it to the liver for disposal. But in the new study, the researchers identified a special type of HDL called HDL3 that, when produced by the intestine, blocks gut bacterial signals that cause liver inflammation. If not blocked, these bacterial signals travel from the intestine to the liver, where they activate immune cells that trigger an inflammatory state, which leads to liver damage.

"Even though HDL has been considered 'good cholesterol,' drugs that increase overall HDL levels have fallen out of favor in recent years because of clinical trials that showed no benefit in cardiovascular disease," said the senior author. "But our study suggests that raising levels of this specific type of HDL, and specifically raising it in the intestine, may hold promise for protecting against liver disease, which, like heart disease, also is a major chronic health problem." In the study, the researchers showed that HDL3 from the intestine protects the liver from inflammation in mice.

Any sort of intestinal damage can impact how a group of microbes called Gram-negative bacteria can affect the body. Such microbes produce an inflammatory molecule called lipopolysaccharide that can travel to the liver via the portal vein. The portal vein is the major vessel that supplies blood to the liver, and it carries most nutrients to the liver after food is absorbed in the intestine. Substances from gut microbes may travel along with nutrients from food to activate immune cells that trigger inflammation. In this way, elements of the gut microbiome may drive liver disease, including fatty liver disease and liver fibrosis, in which the liver develops scar tissue.

Some premature infants develop a life-threatening condition called necrotizing enterocolitis, an inflammation of the intestine that can require a portion of the intestine to be surgically removed. Even after a successful bowel surgery, such babies often develop liver disease, and the authors wanted to understand why.

"They were studying this problem in a mouse model of the condition: They remove a portion of the small intestine in mice and study the liver fibrosis that results," the author said. "There were hints in the literature that HDL might interfere with lipopolysaccharide's detection by immune cells and that the receptor for lipopolysaccharide might be linked to liver disease following the bowel surgery.

"However, no one thought that HDL would directly move from the intestine to the liver, which requires that it enter the portal vein," she said. "In other tissues, HDL travels out through a different type of vessel called a lymphatic vessel that, in the intestine, does not link up to the liver. We have a very nice tool in our lab that lets us shine light on different organs and track the HDL from that organ. So, we wanted to shine light on the intestine and see how the HDL leaves and where it goes from there. That's how we showed that HDL3 leaves only through the portal vein to go directly to the liver."

As a complex of proteins and fats, HDL3 uses its partnership with LBP to bind to lipopolysaccharide. When LBP is part of the HDL3 complex, it prevents the harmful bacterial molecule from activating the liver Kupffer cells and inducing inflammation, according to experiments conducted by first author.

"We think that LBP, only when bound to HDL3, is physically standing in the way, so lipopolysaccharide can't activate the inflammatory immune cells," the first author said. "HDL3 is essentially hiding the harmful molecule. However, if LBP is binding to lipopolysaccharide and HDL3 is not present, LBP is not able to stand in the way. Without HDL3, LBP is going to trigger stronger inflammation."

The researchers showed that liver injury is worse when HDL3 from the intestine is reduced, such as from surgical removal of a portion of the intestine.

"The surgery seems to cause two problems," the senior author said. "A shorter intestine means it's making less HDL3, and the surgery itself leads to an injurious state in the gut, which allows more lipopolysaccharide to spill over into the portal blood. When you remove the part of the intestine that makes the most HDL3, you get the worst liver outcome. When you have a mouse that cannot genetically make HDL3, liver inflammation is also worse. We also wanted to see if this dynamic was present in other forms of intestinal injury, so we looked at mouse models of a high-fat diet and alcoholic liver disease."

In all of these models of intestinal injury, the researchers found that HDL3 was protective, binding to the additional lipopolysaccharide released from the injured intestine and blocking its downstream inflammatory effects in the liver.

The researchers further showed that the same protective molecular complexes were present in human blood samples, suggesting a similar mechanism is present in people. They also used a drug compound to increase HDL3 in the intestines of mice and found it to be protective against different types of liver injury. While the drug is only available for animal research, the study reveals new possibilities for treating or preventing liver disease, whether it stems from damage to the intestine caused by high-fat diets, alcohol overuse or physical injury, such as from surgery.

"We are hopeful that HDL3 can serve as a target in future therapies for liver disease," the author said. "We are continuing our research to better understand the details of this unique process."