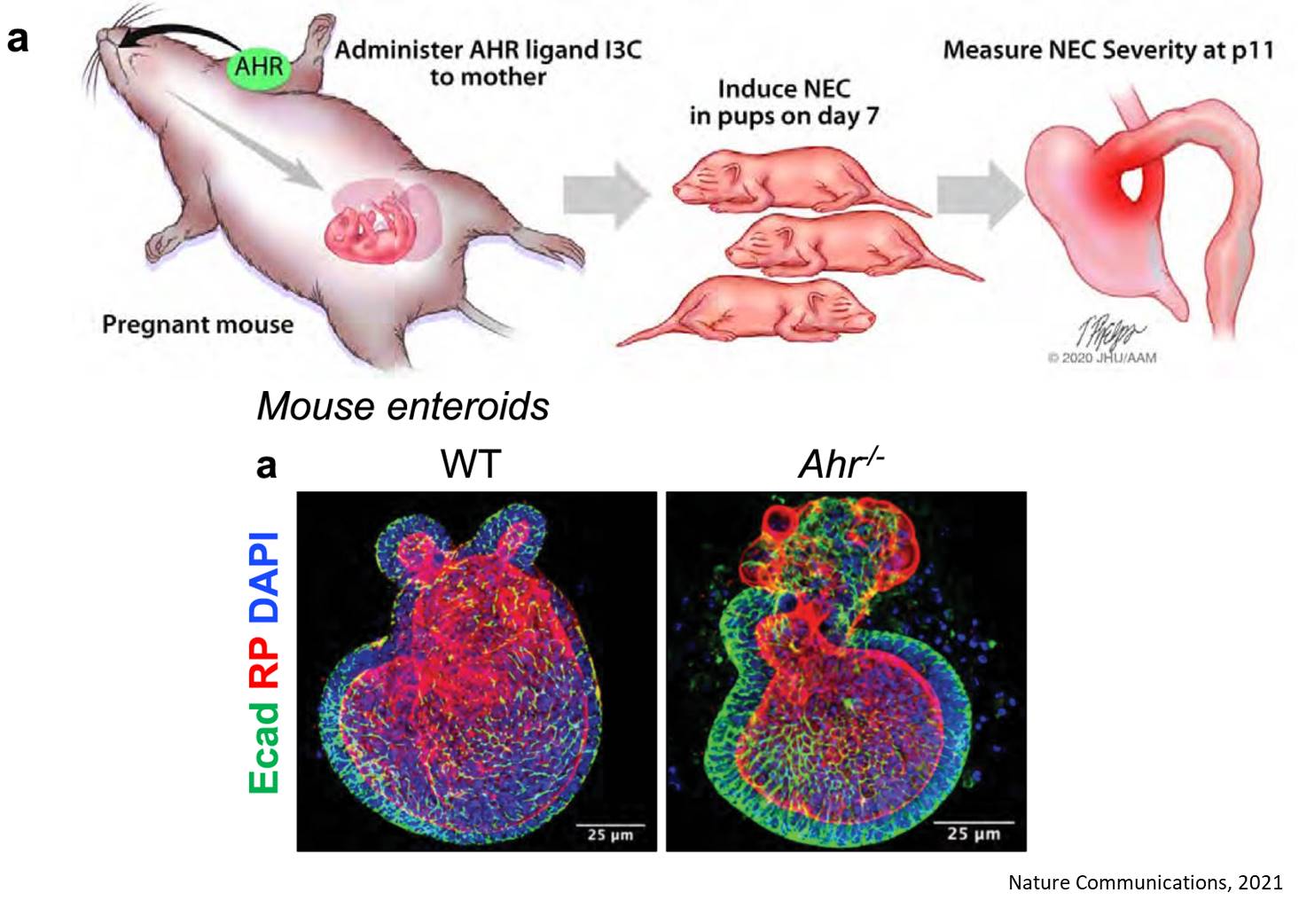 Medical researchers have long understood that a pregnant mother's diet has a profound impact on her developing fetus's immune system and that babies -- especially those born prematurely -- who are fed breast milk have a more robust ability to fight disease, suggesting that even after childbirth, a mother's diet matters. However, the biological mechanisms underlying these connections have remained unclear.

Now, a research team reports that pregnant mice fed a diet rich in a molecule found abundantly in cruciferous vegetables -- such as broccoli, Brussels sprouts and cauliflower -- gave birth to pups with stronger protection against necrotizing enterocolitis (NEC). NEC is a dangerous inflammatory condition that destroys a newborn's intestinal lining, making it one of the leading causes of mortality in premature infants.

The team also found that breast milk from these mothers continued to confer immunity against NEC in their offspring.

Seen in as many as 12% of newborn babies weighing less than 3.5 pounds at birth, NEC is a rapidly progressing gastrointestinal emergency in which normally harmless gut bacteria invade the underdeveloped wall of the premature infant's colon, causing inflammation that can ultimately destroy healthy tissue at the site. If enough cells become necrotic (die) so that a hole is created in the intestinal wall, the bacteria can enter the bloodstream and cause life-threatening sepsis.

In earlier mouse studies, researchers showed that NEC results when the underdeveloped intestinal lining in premature infants produces higher-than-normal amounts of a protein called toll-like receptor 4 (TLR4). TLR4 in full-term babies binds with bacteria in the gut and helps keep the microbes in check. However, in premature infants, TLR4 can act like an immune system switch, with excess amounts of the protein mistakenly directing the body's defense mechanism against disease to attack the intestinal wall instead.

"Based on this understanding, we designed our latest study to see if indole-3-carbinole, or I3C for short, a chemical compound common in green leafy vegetables and known to switch off the production of TLR4, could be fed to pregnant mice, get passed to their unborn children and then protect them against NEC after birth," says study senior author. "We also wanted to determine if I3C in breast milk could maintain that protection as the infants grow."

In the first of three experiments, the authors sought to induce NEC in 7-day old mice, half of which were born from mothers fed I3C derived from broccoli during their pregnancies and half from mothers fed a diet without I3C. They found that those born from mothers given I3C throughout gestation were 50% less likely to develop NEC, even with their immune systems still immature at one week after birth.

The second experiment examined whether breast milk with I3C could continue to provide infant mice with protection against NEC. To do this, the researchers used mice genetically bred without the binding site on intestinal cells for I3C known as the aryl hydrocarbon receptor (AHR).

When AHR-lacking pups were given breast milk from mice fed a diet containing I3C, they could not process the compound. Therefore, they developed severe NEC 50% more frequently than infant mice that had the I3C receptor.

The researchers say this shows in mice -- and suggests in humans -- that AHR must be activated to protect babies from NEC and that what a mother eats during breastfeeding -- in this case, I3C -- can impact the ability of her milk to bolster an infant's developing immune system.

In confirmatory studies, the authors looked at the amounts of AHR in human tissue obtained from infants undergoing surgery for severe NEC. They found significantly lower than normal levels of the receptor, suggesting that reduced AHR predisposes infants to the disease.

Finally, the researchers searched for a novel drug that could be given to pregnant women to optimize AHR's positive effect and reduce the risk of NEC in the event of premature birth. After screening in pregnant mice a variety of compounds already approved by the U.S. Food and Drug Administration for other clinical uses, the researchers observed that one, which they called A18 (clinically known as lansoprazole, a drug approved for the treatment of gastrointestinal hyperacidity), activates the I3C receptor, limits TLR4 signaling and prevents gut bacteria from infiltrating the intestinal wall.

To show the relevance of what they saw in mice, the researchers tested A18 in the laboratory on human intestinal tissue removed from patients with NEC and found the drug produced similar protective results.

"These findings enable us to imagine the possibility of developing a maternal diet that can not only boost an infant's overall growth, but also enhance the immune system of a developing fetus and, in turn, reduce the risk of NEC if the baby is born prematurely," says the author.