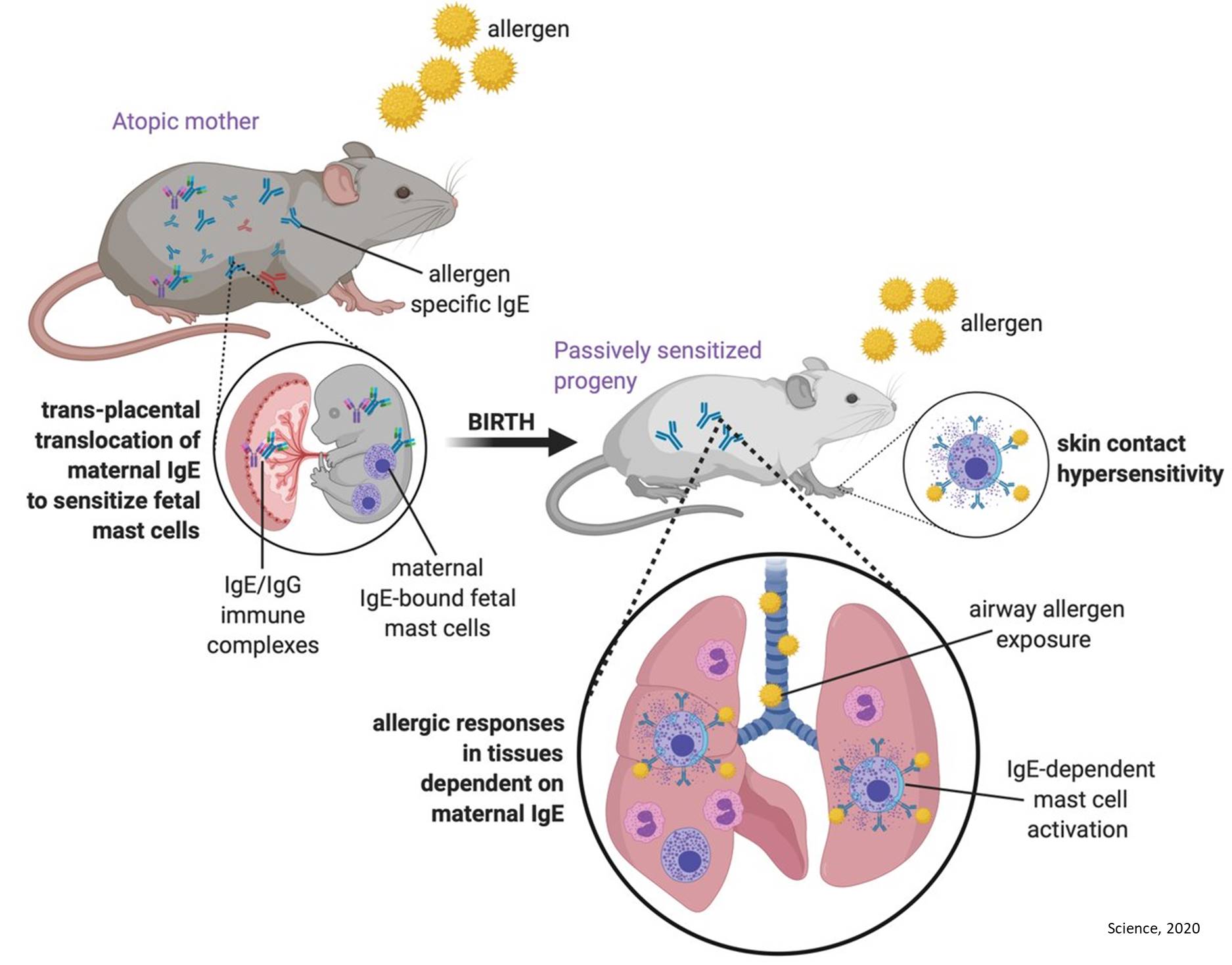 Mothers can pass allergies to offspring while they are developing in the womb, researchers reported this week in the journal Science.

The study, which employed an animal model shows that the key antibody responsible for triggering allergic reactions, immunoglobulin E (IgE), can cross the placenta and enter the foetus. When inside the foetus, the antibody binds to foetal mast cells, a type of immune cell that releases chemicals that trigger allergic reactions, from runny noses to asthma. After birth, newborn mice develop allergic reactions to the same type of allergen as their mothers at the time of first exposure - unlike adult mice, which require two exposures. Studies in the laboratory also showed that maternal IgE can bind to human foetal mast cells, indicating they might cross the placenta in humans in a similar way.

A senior co-author of the study, said, "There is currently a significant lack of knowledge on mast cells that are present early on in the developing foetus. Here, we discovered that foetal mast cells phenotypically mature through the course of pregnancy, and can be sensitised by IgE of maternal origin that cross the placental barrier. The study suggests that a highly allergic pregnant mother may potentially transfer her IgE to her baby that consequently develop allergic reactions when exposed to the first time to the allergen."

"Allergies begin very early in life," said another senior co-author of the study. "Infants experience allergic responses closely linked with the mother's allergic response in ways that cannot only be explained by genetics. This work emphasises one way that allergic responses can pass from the mother to the developing foetus, and shows how allergies can then persist after birth."

As part of the study researchers exposed mice to ragweed pollen, a common allergen, prior to pregnancy. Mice that developed a sensitivity to the pollen had offspring that also showed an allergic reaction to ragweed. The sensitivity is allergen-specific; the offspring did not react to dust mites, another common allergen.

Notably, the transfer of sensitivity appears to fade with time. The newborn mice had allergic reactions when tested at four weeks, but less or none at six weeks.

The experimental studies were backed up with cellular tests and imaging, which showed maternal IgE bound to fetal mast cells, triggering the mast cells to release chemicals in reaction to an allergen, a process called degranulation.

This study further showed that the IgE transfer across the placenta requires the help of another protein, FcRN. Mice with FcRN knocked out lacked maternal IgE attached to their mast cells, and did not develop allergies after birth.

The study findings potentially open new intervention strategies to limit such transfer to minimise the occurrence of neonatal allergies. Currently, between 10 to 30 per cent of the world's population are affected by allergies. This number is set to continue rising and a solution preventing allergies being passed from mother to child could potentially bring those numbers down over time.

The authors next aim to better understand the mechanism of IgE transfer through the placenta, how IgE binding to mast cells in foetal skin modulate their functions and how it could affect skin physiology after birth.