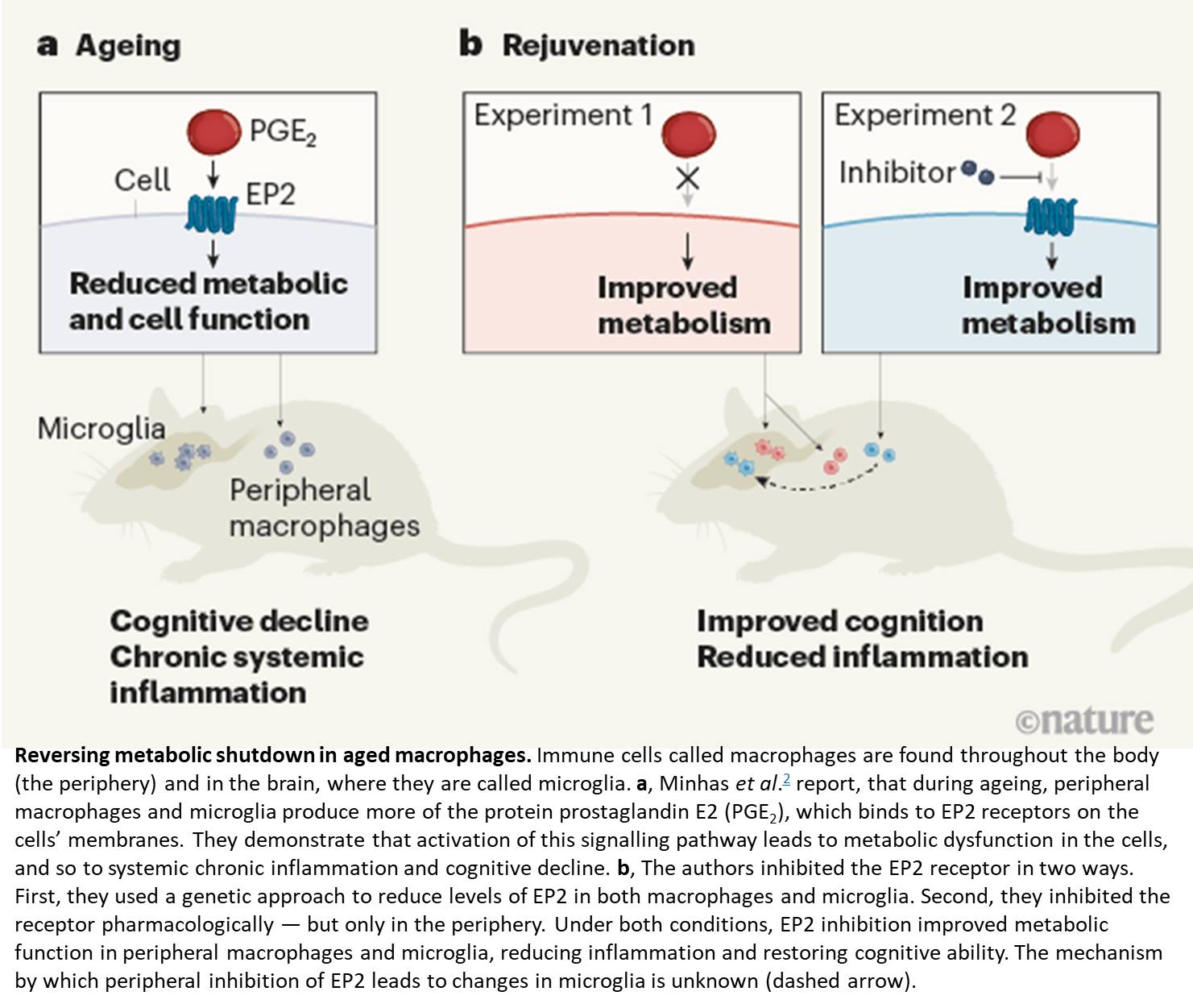 Biologists have long theorized that reducing this inflammation could slow the aging process and delay the onset of age-associated conditions, such as heart disease, Alzheimer's disease, cancer and frailty, and perhaps even forestall the gradual loss of mental acuity that happens to nearly everyone.

Yet the question of what, exactly, causes particular cells of the immune system to kick into inflammatory overdrive has lacked a definitive answer.

Now, researchers think they have one. If their findings in old mice and in human cell cultures apply to actual humans, they could presage the pharmaceutically managed recovery of older people's mental abilities. In a study to be published in Nature, the investigators pin the blame on a set of immune cells called myeloid cells.

Myeloid cells, which are found in the brain, the circulatory system and the body's peripheral tissues, are part soldier and part park ranger. When not fighting off infectious intruders, they keep busy cleaning up debris, such as dead cells and clumps of aggregated proteins; provide nutrient snacks to other cells; and serve as sentinels watching for signs of invading pathogens.

But as we age, myeloid cells begin neglecting their normal, health-protecting functions and adopting an agenda of endless warfare with a nonexistent enemy, inflicting collateral damage to innocent tissues in the process.

In the study, blocking the interaction of a particular hormone and a receptor that abounds on myeloid cells was enough to restore the youthful metabolism and placid temperament of mouse and human myeloid cells in a dish and in living mice. This blockade also reversed age-related mental decline in older mice, restoring their recall and navigation skills to those exhibited by young mice.

"If you adjust the immune system, you can de-age the brain," the senior author said. The team's experiments in human cells suggest that similar rejuvenation may be possible in people, the author said.

Myeloid cells are the body's main source of PGE2, a hormone that belongs to the family known as prostaglandins. PGE2 does many different things in the body -- some good, some not always so good -- for example, promoting inflammation. What PGE2 does depends on which cells, and which of several different varieties of receptor on those cells' surfaces, the hormone lands on.

One receptor type for PGE2 is EP2. This receptor is found on immune cells and is especially abundant on myeloid cells. It initiates inflammatory activity inside the cells after binding to PGE2.

The team cultured macrophages, a class of myeloid cells situated in tissues throughout the body, from people older than 65 and compared them with macrophages from people younger than 35. They also looked at macrophages of young versus old mice.

Older mouse and human macrophages, they observed, not only produced much more PGE2 than younger ones but also had far greater numbers of EP2 on their surfaces. The team also confirmed significant increases of PGE2 levels in the blood and brains of old mice.

"It's a double-whammy -- a positive feedback loop," the senior author said. The resulting exponential increase in PGE2-EP2 binding amps up intracellular processes associated with inflammation in the myeloid cells.

The researchers found that myeloid cells undergo an increasing propensity, driven by age-associated increased PGE2-EP2 binding, to hoard glucose by converting this energy source into long glucose chains called glycogen (the animal equivalent of starch) instead of "spending" it on energy production. That hoarding, and the cells' subsequent chronically energy-depleted state, drives them into an inflammatory rage, wreaking havoc on aging tissues.

"This powerful pathway drives aging," the senior author said. "And it can be downshifted."

The scientists showed this by blocking the hormone-receptor reaction on myeloid-cell surfaces in the mice. They gave mice either of two experimental compounds known to interfere with PGE2-EP2 binding in the animals. They also incubated cultured mouse and human macrophages with these substances. Doing so caused old myeloid cells to metabolize glucose just as young myeloid cells do, reversing the old cells' inflammatory character.

One of the two compounds the scientists used was effective even though it doesn't penetrate the blood-brain barrier. This suggests, the author said, that even resetting myeloid cells outside the brain can achieve profound effects on what goes on inside the brain.

Neither compound is approved for human use, theauthor  noted, and it's possible they have toxic side effects, although none were observed in the mice. They provide a road map for drug makers to develop a compound that can be given to people.