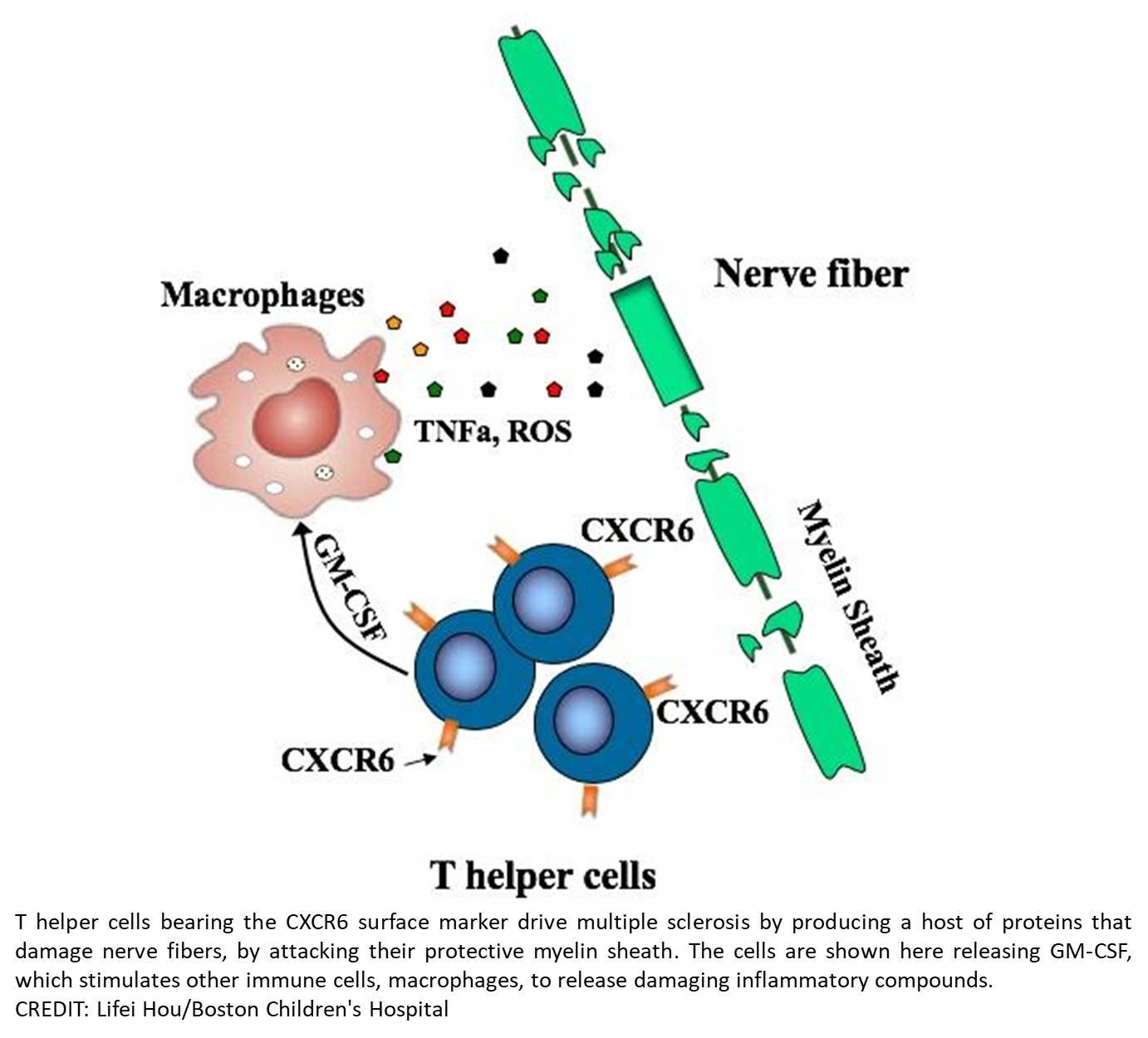 Multiple sclerosis, an autoimmune disorder, is known to be driven by "helper" T cells, white blood cells that mount an inflammatory attack on the brain and spinal cord. A new study pinpoints the specific subgroup of helper T cells that cause MS, as well as a protein on their surface, called CXCR6, that marks them. An antibody targeting CXCR6 both prevented and reversed MS in a mouse model, the researchers report in PNAS.

If the findings bear out in human studies, targeting these rogue T cells could ameliorate MS, the researchers believe. The findings could also apply to other forms of autoimmune encephalomyelitis (inflammation of the brain and spinal cord), as well as inflammatory arthritis, says the senior author on the paper.

"We've demonstrated in mice you can target these cells and get rid of them," says the senior author. "We don't know if this approach would be appropriate for all cases of MS, but it could be effective in the early inflammatory stages of the disease, and in targeting newly formed cells during disease exacerbations."

T helper cells in general have been known to drive MS, coordinating the attack on the protective myelin sheath that covers nerve fibers. But there are many different types of T helper cells. Recent studies have pointed to TH17 cells, but some TH17 cells appear not to be involved in MS.

The new study zeroed in on a subset of TH17-derived cells, all bearing the CXCR6 marker. These cells are fast-proliferating and very damaging, producing one set of proteins that directly damage cells and others, including GM-CSF, that stimulate an inflammatory attack by other immune cells known as macrophages.

The study showed that these cells also produce increased amounts of a protein called SerpinB1 (Sb1), and that this protein's presence is necessary for MS symptoms. When Sb1 was genetically deleted in T cells in the mouse MS model, fewer immune cells survived to infiltrate the spinal cord, and the disease was ameliorated as compared with control mice. The team then went on to show that these Sb1-containing cells could be readily identified with antibodies targeting the CXCR6 surface protein.

Sb1−/− mice are resistant to experimental autoimmune encephalomyelitis (EAE) with a paucity of T helper (TH) cells that produce two or more of the cytokines, IFNγ, GM-CSF, and IL-17. These multiple cytokine-producing CD4 cells proliferate extremely rapidly; highly express the cytolytic granule proteins perforin-A, granzyme C (GzmC), and GzmA and surface receptors IL-23R, IL-7Rα, and IL-1R1; and can be identified by the surface marker CXCR6. In Sb1−/− mice, CXCR6+ TH cells are generated but fail to expand due to enhanced granule protease-mediated mitochondrial damage leading to suicidal cell death.

To investigate whether CXCR6-positive cells are relevant in human disease, the authors worked with physicians to obtain samples of synovial fluid (from the cavities of joints) from patients with inflammatory autoimmune arthritis. They indeed found elevated levels of CXCR6+ cells in the inflamed joints. In contrast, circulating blood from the arthritis patients did not have elevated CXCR6+ cells and healthy controls.

When the team used monoclonal antibodies to target CXCR6, the harmful cells largely disappeared, and mice, which were primed to get MS, did not develop the disease. The researchers believe treatments to deplete CXCR6+ cells could mitigate MS and possibly other autoimmune disorders while largely leaving other T cell immune defenses intact.