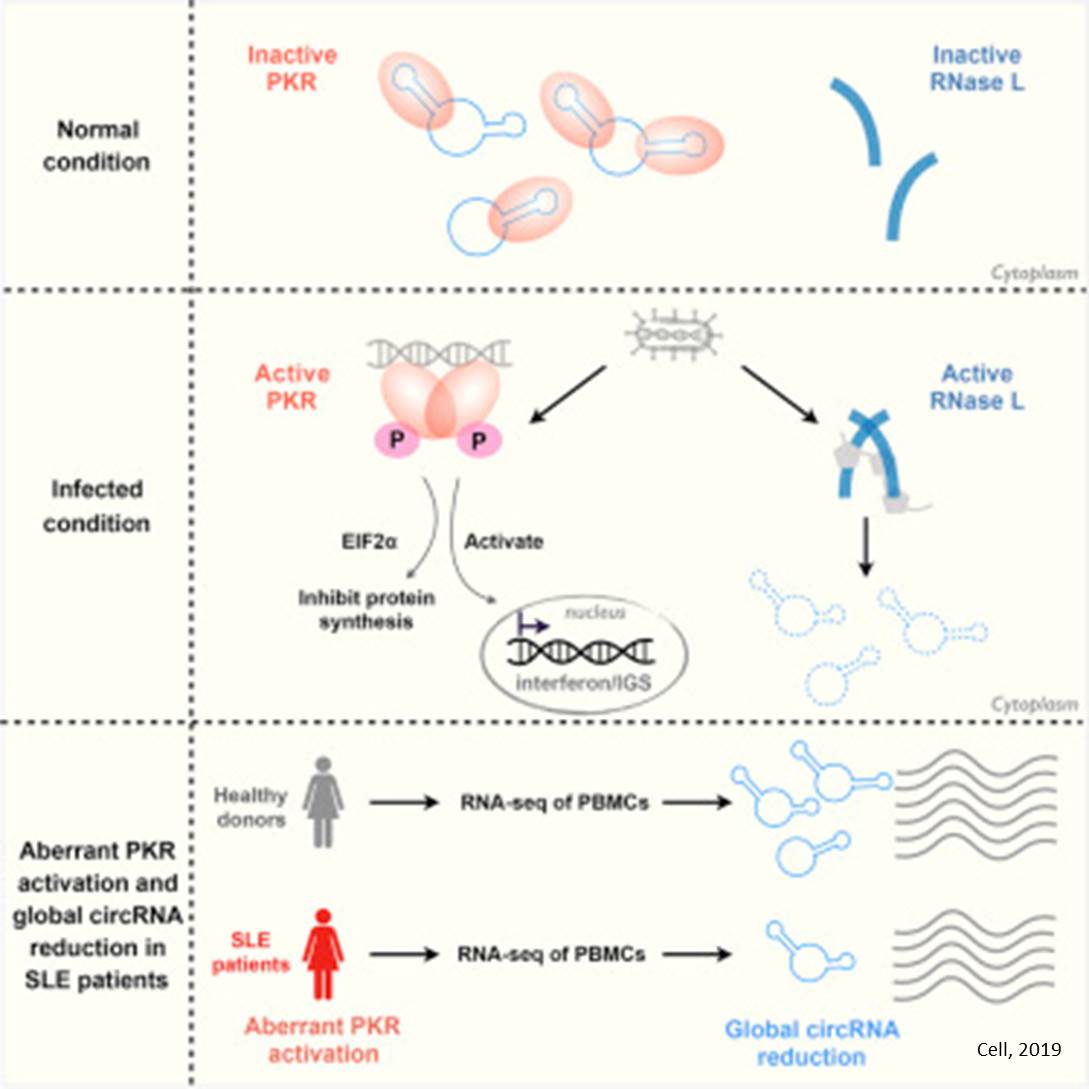 Covalently closed circular RNAs (circRNAs) are produced by precursor mRNA back-splicing the exons of thousands of genes in eukaryotes. They are generally expressed at low levels and often exhibit cell-type-specific and tissue-specific patterns.

The study of circRNAs, especially their function, is challenging due to their circular conformation and sequence-overlap with linear mRNA counterparts.

In a study published in Cell, a team of researchers discovered that most examined circRNAs tend to form 16-26 bp intramolecularly imperfect RNA duplexes. In addition, circRNAs preferentially bind to dsRNA-activated protein kinase (PKR) which is related to innate immunity and act as PKR inhibitors.

The study also showed that dysregulation of circRNA expression and PKR activation is linked to the autoimmune disease systemic lupus erythematosus (SLE).

As circRNAs are stable in examined cells and tissues under normal conditions, the scientists sought to determine whether they could be degraded under certain types of cellular stress. They found that both poly(I:C) and encephalomyocarditis (EMCV) dsRNAs can trigger global circRNA degradation by activated RNase L upon viral infection.

Intriguingly, although both circRNAs and linear RNAs are degraded by RNase L, earlier studies showed that nascent circRNA production is rare. As a result, the amount of new circRNAs produced from pre-mRNAs cannot overcome rapid degradation by RNase L within a short period after early innate immune responses. This results in global loss of circRNAs and the subsequent release of circRNA-associated PKR , thus allowing PKR activation.

PKR is directly activated by dsRNA and plays a central role in the cytoplasmic response to dsRNA. In order to learn how circRNAs bind to PKR and regulate its activation, the researchers optimized selective 2'-hydroxyl acylation analyzed by primer extension and mutational profiling (SHAPE-MaP) assays and uncovered most examined circRNAs tend to form 16-26 bp imperfect RNA duplexes which can act as PKR inhibitors in cells. This shows that massive and rapid degradation of circRNAs by RNase L is required for PKR activation in the early stage of the innate immune response.

An autoimmune cause of schizophrenia