Sympathetic nervous systems role in the development of autoimmune disease 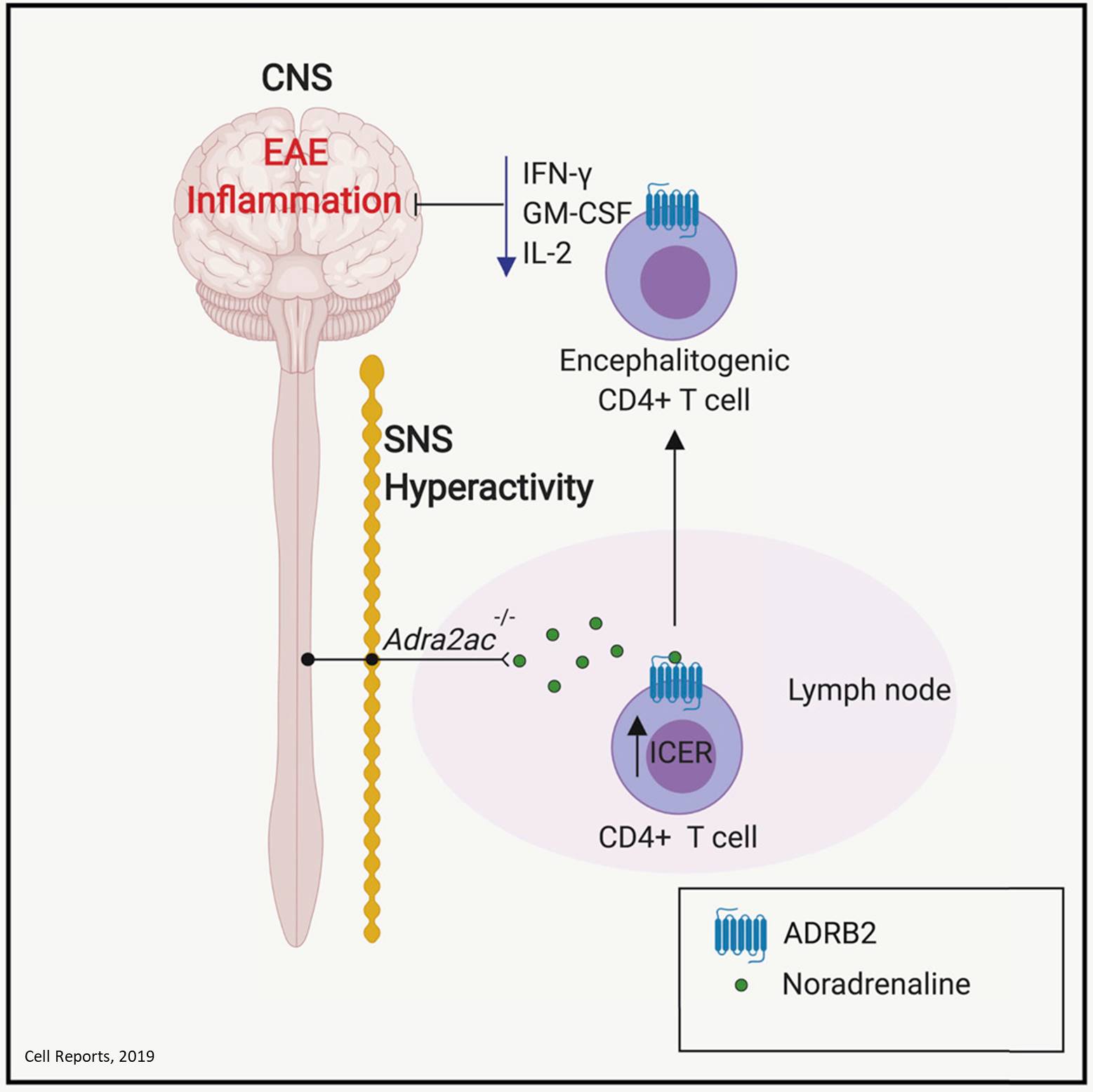 The results of a study suggest that the sympathetic nervous system - the part of the autonomous nervous system that controls responses to danger or stress - can modulate the action of defense cells in patients with autoimmune diseases.

Using an experimental model of multiple sclerosis, the scientists found that the sympathetic nervous system can limit the generation of effector responses by inhibiting the action of the cells that attack an antigen taken as a threat by the immune system. The findings are published in the journal Cell Reports.

The most widely used model in research on multiple sclerosis and comparable autoimmune diseases is an animal model known as experimental autoimmune encephalomyelitis, which consists of inducing an inflammatory response in the animal's central nervous system by means of immunization with antigens from myelin, the lipid-rich insulating substance that surrounds nerve fibers and helps transmit electrical pulses. The model can involve different animals depending on the requirements of the experiment.

In the case of multiple sclerosis, defense cells attack the antigens, causing nerve fiber demyelination (loss of myelin) and impairing communication between neurons. Alterations in the transmission of electrical pulses result in problems such as muscle weakness, loss of balance and motor coordination, and joint pain.

"Neurons and cells that express tyrosine hydroxylase are also capable of taking up 6-hydroxydopamine through specific transporters. Because of its toxicity, 6-OHDA eventually eliminates the cells and fibers of the sympathetic nervous system."

The results of studies using 6-OHDA are contradictory. Some suggest that the process limits the development of autoimmune disease, while others show exactly the opposite - the disorder becomes even more severe in the absence of these nerve fibers.

Some studies point to the possibility that treatment with 6-OHDA could eliminate immune system cells that are important to the development of the disease. "Based on this finding, we formulated the hypothesis that the contradictions in the studies using 6-OHDA could reflect the fact that some immune system cells with which the nervous system interacts also express tyrosine hydroxylase and are capable of synthesizing and secreting noradrenaline, so they're targets of 6-OHDA," the author said.

Animals that lack these receptors release much more noradrenaline. "We opted for the opposite strategy: instead of using a model that eliminated the fibers [reducing production of noradrenaline], we used a model in which the sympathetic nervous system was hyperactive [and released more noradrenaline]," the author said.

"After finding that animals with sympathetic nervous system hyperactivity did indeed develop a milder form of the disease with an impaired effector immune response [which should destroy myelin antigens], we wondered how the higher level of noradrenaline released by the sympathetic nervous system might influence development of the disease in these animals."

To answer this question, the scientists pharmacologically blocked the ß2-adrenergic receptor, one of the cell receptors activated by noradrenaline. After this procedure, the animals developed a more severe form of the disease than that in the control group (with a hyperactive sympathetic nervous system), confirming that the sympathetic nervous system influences the development of autoimmune disease.

"In sum, we concluded that the higher level of noradrenaline released by the sympathetic nervous system regulated development of the disease by augmenting activation of the ß2-adrenergic receptor in immune system cells, especially CD4+ T lymphocytes," the author said. This type of T cell plays a key role in the activation and stimulation of other leukocytes and orchestrated the central nervous system's inflammatory response in the animals with encephalomyelitis.

The new model is being used to study the mechanism whereby the sympathetic nervous system influences allergic responses in the lungs. There are molecules that activate or block the ß2-adrenergic receptor and are used in various situations. "One of them is fenoterol, used to relax the airways in patients with asthma and bronchoconstriction, so they can breathe more easily. How does its use affect the immune response? Our research is now pursuing answers to such questions," the author said.