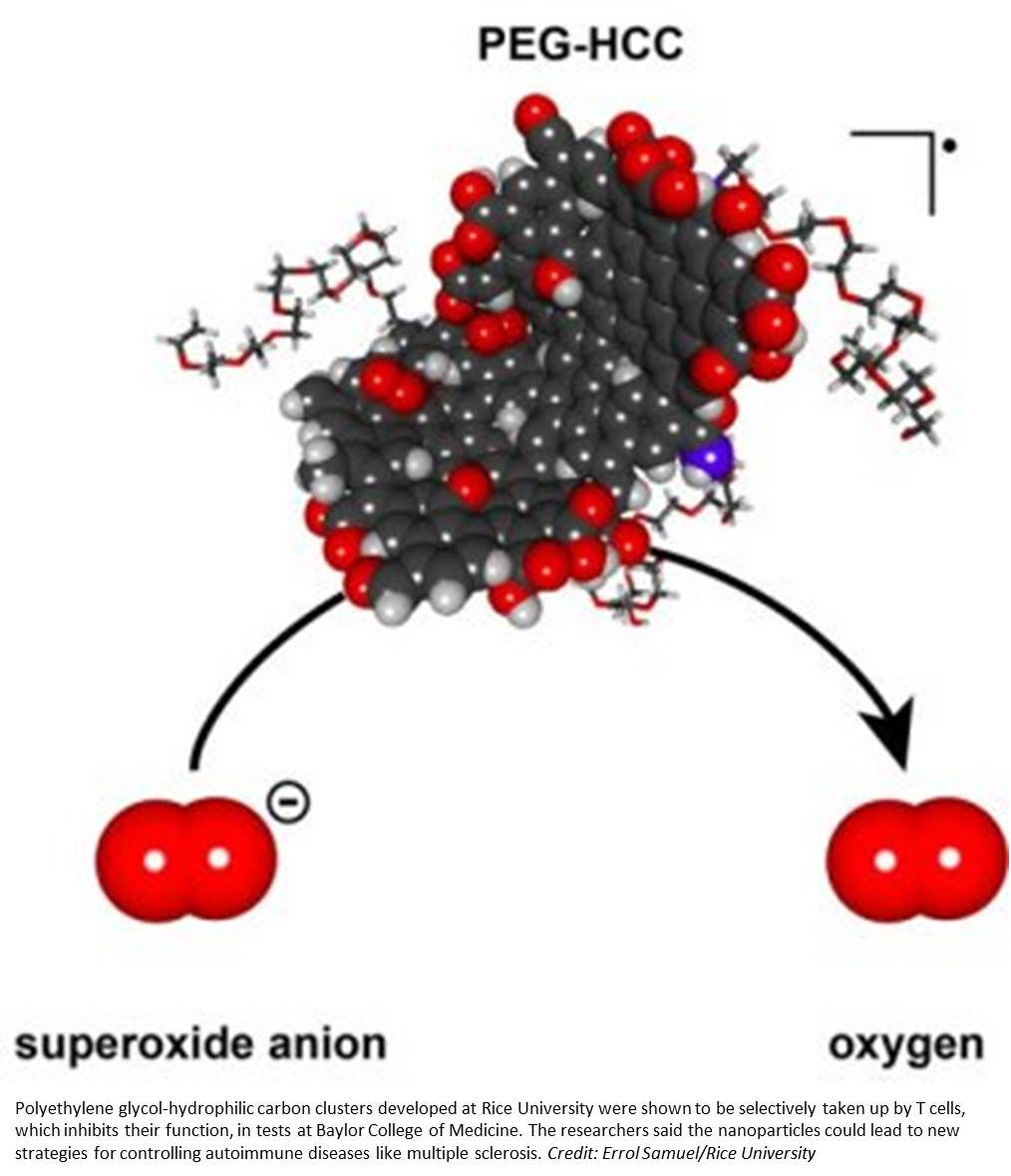 A proof-of-principle study led published in the journal Scientific Reports shows that nanoparticles modified with polyethylene glycol are conveniently choosy as they are taken up by cells in the immune system.

That could be a plus for patients with autoimmune diseases like multiple sclerosis. "Placed just under the skin, the carbon-based particles form a dark spot that fades over about one week as they are slowly released into the circulation," senior author said.

T and B lymphocyte cells and macrophages are key components of the immune system. However, in many autoimmune diseases such as multiple sclerosis, T cells are the key players. One suspected cause is that T cells lose their ability to distinguish between invaders and healthy tissue and attack both.

In tests at Baylor, nanoparticles were internalized by T cells, which inhibited their function, but ignored by macrophages. "The ability to selectively inhibit one type of cell over others in the same environment may help doctors gain more control over autoimmune diseases," author said.

"The majority of current treatments are general, broad-spectrum immunosuppressants," said lead author of the study. "They're going to affect all of these cells, but patients are exposed to side effects (ranging) from infections to increased chances of developing cancer. So we get excited when we see something new that could potentially enable selectivity." Since the macrophages and other splenic immune cells are unaffected, most of a patient's existing immune system remains intact, he said.

The soluble nanoparticles synthesized have shown no signs of acute toxicity in prior rodent studies. They combine polyethylene glycol with hydrophilic carbon clusters, hence their name, PEG-HCCs. The carbon clusters are 35 nanometers long, 3 nanometers wide and an atom thick, and bulk up to about 100 nanometers in globular form with the addition of PEG. They have proven to be efficient scavengers of reactive oxygen species called superoxide molecules, which are expressed by cells the immune system uses to kill invading microorganisms.

T cells use superoxide in a signaling step to become activated. PEG-HCCs remove this superoxide from the T cells, preventing their activation without killing the cells.

The Baylor lab's tests on animal models showed that small amounts of PEG-HCCs injected under the skin are slowly taken up by T lymphocytes, where they collect and inhibit the cell's function. They also found the nanoparticles did not remain in T cells and dispersed within days after uptake by the cells.

Senior author suggested delivering carbon nanoparticles just under the skin rather than into the bloodstream would keep them in the system longer, making them more available for uptake by T cells. And the one drawback -- a temporary but visible spot on the skin that looks like a tattoo -- could actually be a perk to some.
"We saw it made a black mark when we injected it, and at first we thought that's going to be a real problem if we ever take it into the clinic," author said. "But we can work around that. We can inject into an area that's hidden, or use micropattern needles and shape it.

"I can see doing this for a child who wants a tattoo and could never get her parents to go along," author said. "This will be a good way to convince them."