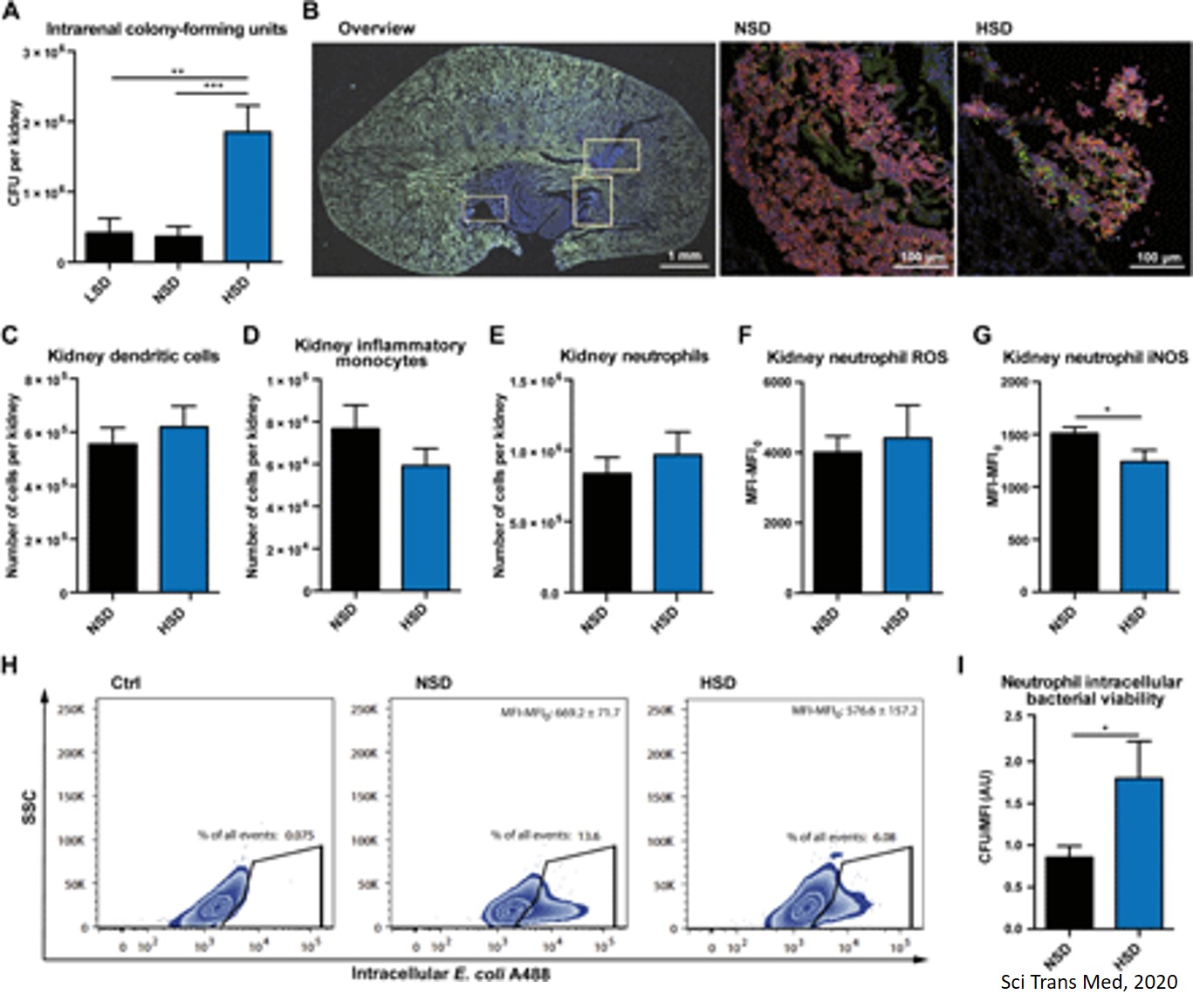 A high-salt diet is not only bad for one's blood pressure, but also for the immune system. Mice fed a high-salt diet were found to suffer from much more severe bacterial infections. Human volunteers who consumed an additional six grams of salt per day also showed pronounced immune deficiencies. This amount corresponds to the salt content of two fast food meals. The results are published in the journal Science Translational Medicine.

Five grams a day, no more: This is the maximum amount of salt that adults should consume according to the recommendations of the World Health Organization (WHO). It corresponds approximately to one level teaspoon. In reality, however, many Germans exceed this limit considerably: Figures from the Robert Koch Institute suggest that on average men consume ten, women more than eight grams a day.

This means that we reach for the salt shaker much more than is good for us. After all, sodium chloride, which is its chemical name, raises blood pressure and thereby increases the risk of heart attack or stroke. But not only that: "We have now been able to prove for the first time that excessive salt intake also significantly weakens an important arm of the immune system," explains the senior author.

This finding is unexpected, as some studies point in the opposite direction. For example, infections with certain skin parasites in laboratory animals heal significantly faster if these consume a high-salt diet: The macrophages, which are immune cells that attack, eat and digest parasites, are particularly active in the presence of salt. Several physicians concluded from this observation that sodium chloride has a generally immune-enhancing effect.

"Our results show that this generalization is not accurate," emphasizes the lead author of the study. There are two reasons for this: Firstly, the body keeps the salt concentration in the blood and in the various organs largely constant. Otherwise important biological processes would be impaired. The only major exception is the skin: It functions as a salt reservoir of the body. This is why the additional intake of sodium chloride works so well for some skin diseases.

However, other parts of the body are not exposed to the additional salt consumed with food. Instead, it is filtered out by the kidneys and excreted in the urine. And this is where the second mechanism comes into play: The kidneys have a sodium chloride sensor that activates the salt excretion function. As an undesirable side effect, however, this sensor also causes so-called glucocorticoids to accumulate in the body. And these in turn inhibit the function of granulocytes, the most common type of immune cell in the blood.

Granulocytes, like macrophages, are scavenger cells. However, they do not attack parasites, but mainly bacteria. If they do not do this to a sufficient degree, infections proceed much more severely. "We were able to show this in mice with a listeria infection," explains the author. "We had previously put some of them on a high-salt diet. In the spleen and liver of these animals we counted 100 to 1,000 times the number of disease-causing pathogens." Listeria are bacteria that are found for instance in contaminated food and can cause fever, vomiting and sepsis. Urinary tract infections also healed much more slowly in laboratory mice fed a high-salt diet.

Sodium chloride also appears to have a negative effect on the human immune system. "We examined volunteers who consumed six grams of salt in addition to their daily intake," says the senior author. "This is roughly the amount contained in two fast food meals, i.e. two burgers and two portions of French fries." After one week, the scientists took blood from their subjects and examined the granulocytes. The immune cells coped much worse with bacteria after the test subjects had started to eat a high-salt diet.

In human volunteers, the excessive salt intake also resulted in increased glucocorticoid levels. That this inhibits the immune system is not surprising: The best-known glucocorticoid cortisone is traditionally used to suppress inflammation. "Only through investigations in an entire organism were we able to uncover the complex control circuits that lead from salt intake to this immunodeficiency," stresses the senior author. "Our work therefore also illustrates the limitations of experiments purely with cell cultures."