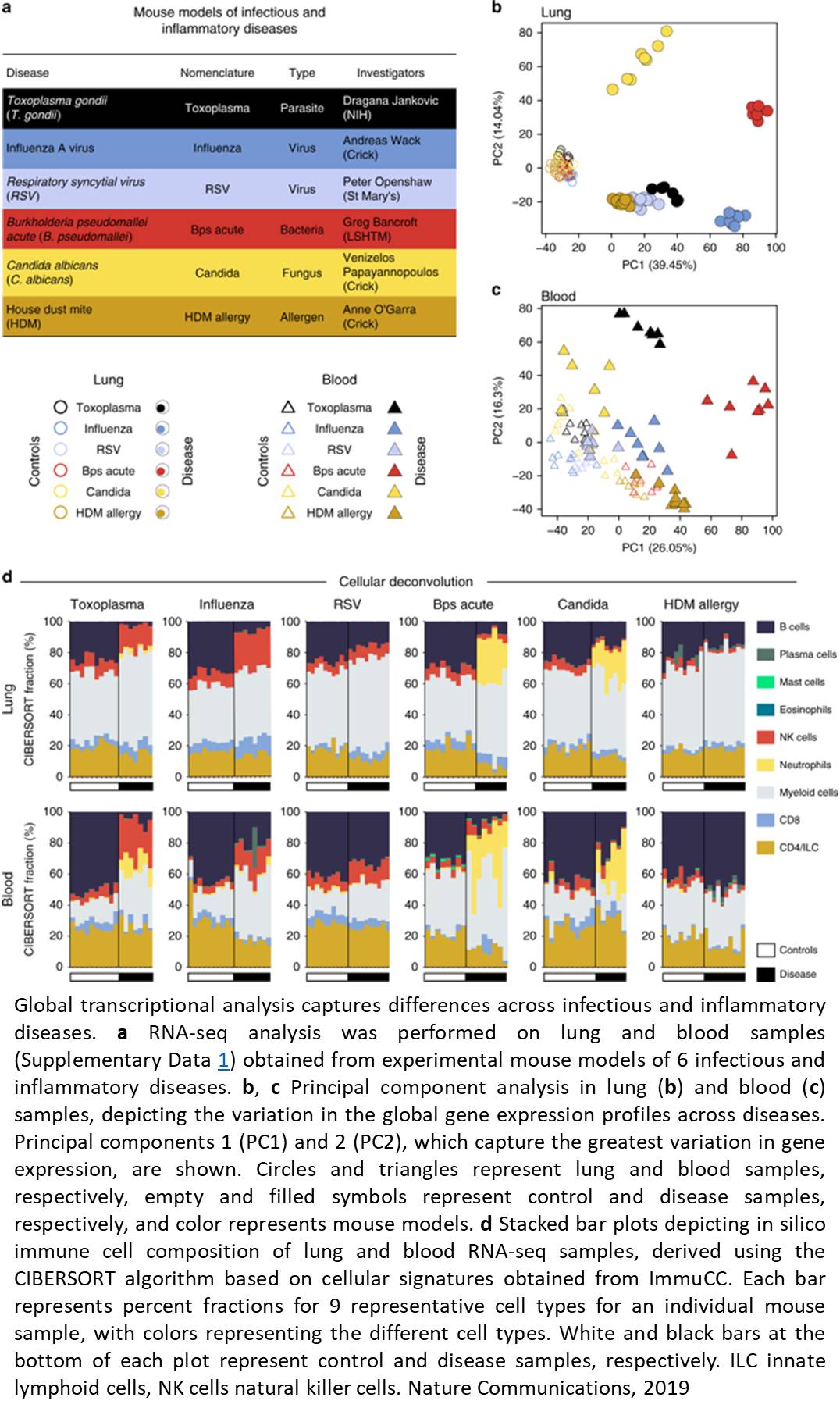 A comprehensive database of gene activity in mice across ten disease models, which could significantly reduce animal use worldwide, has been developed by scientists, which gives a full picture of the immune response to different pathogens.

The data, published in Nature Communications and available through an online app, shows the activity of every mouse gene - more than 45,000 genes - in the blood of mice with ten different diseases. For the six diseases that involve the lung, samples from lung were also examined.

Previously, researchers would have to create, infect, cull, obtain samples from mice and extract and sequence the RNA to study genes that they are interested in. Using a new app which the lab created for this study, researchers will be able to check the activity of any gene across a range of diseases without needing their own mice. This could prevent thousands of mice being used in individual experiments.

The research team used next-generation sequencing technology, 'RNA-seq', to measure gene activity across the different diseases. As genes need to transcribe their DNA into RNA in order to function, analysing the RNA reveals how active each gene is - in this case after infection or allergen challenge.

They used advanced bioinformatics approaches to cluster the genes into modules. These modules represent clusters of genes that are co-regulated and can often be annotated to determine their function and known physiological roles. For example, of 38 lung modules there is a module associated with allergy, and seen only in the allergy model, containing over 100 genes and another module associated with T cells containing over 200 genes."

Using the new app, researchers anywhere in the world can look up gene activity in the lungs and blood of mice infected with a range of pathogens: the parasite Toxoplasma gondii, influenza virus and Respiratory Syncytial Virus (RSV), the bacterium Burkholderia pseudomallei, the fungus Candida albicans, or the allergen, house dust mite. They can also see gene activity in the blood of mice with listeria, murine cytomegalovirus, the malaria parasite Plasmodium chabaudi chabaudi, or a chronic Burkholderia pseudomallei infection.

In the study, the research team analysed the genetic signatures associated with these diseases to help understand the immune response. They discovered a broad range of immune responses in the lung, where discrete modules were dominated by genes associated with Type I or Type II interferons, IL-17 or allergy type responses. Type I interferons are known to be released in response to viruses, while Type II interferon (IFN-?) activates phagocytes to kill intracellular pathogens, and IL-17 attracts neutrophils causing early inflammatory immune responses. Interestingly, interferon gene signatures were present in blood modules similarly to the lung, but IL-17 and allergy responses were not.

Surprisingly, genes associated with type I interferon were highly active in both the lungs and blood of mice infected with the Toxoplasma gondii parasite and also seen in response to the Burkholderia pseudomallei bacterium, albeit to a lesser extent. This challenges the view that type I interferon-associated genes are necessarily indicative of viral infections, as the lab had previously shown in tuberculosis.

"We found that mice without functioning interferon pathways were less able to fight off Toxoplasma infection. This was true for both Type I and Type II interferons, which have a complex relationship with each other. We found that both play a key role in protection against the parasite in part by controlling the neutrophils in the blood which in high numbers can cause damage to the host."

The research project began in 2009, using a technique known as microarray to detect gene activity in lung and blood samples and was almost complete and ready to be analysed by 2015. Microarray was then a well-established technique, but the necessary reagents were suddenly discontinued by the manufacturer before the final samples had been processed. Without the equipment to finish the sequencing, the project was in trouble.

With this microarray technology no longer possible, the team needed a different approach. At this time, a technique called RNA-Seq had come onto the market, offering a better way to quantify gene activity.

Following negotiations with the manufacturer, the team was offered cutting-edge RNA-Seq reagents free of charge, to re process the samples starting in late 2016. They were also provided storage space for the huge amounts of data generated.

As the tissue and blood samples from the microarray experiments were all frozen in storage, the lab was able to go back to the same samples and heroically process them again, this time for RNA sequencing. Thanks to the excellent storage of the samples, this was possible without use of additional animals. Although time-consuming and a huge task, by 2018 the team had all the sequencing data they needed.

With a huge amount of data to process, using advanced bioinformatics techniques, the team clustered the thousands of genes and millions of data points into a meaningful and visual form which we refer to as modules, and created the app to make the data accessible to anyone.

"Ten years since the project began, we now have an open access resource of gene expression that anyone in the world can use to look up their favorite genes and also see if they are regulated by type I or type II interferon signalling," says the author. "Nobody said science was easy, but it's certainly worthwhile."