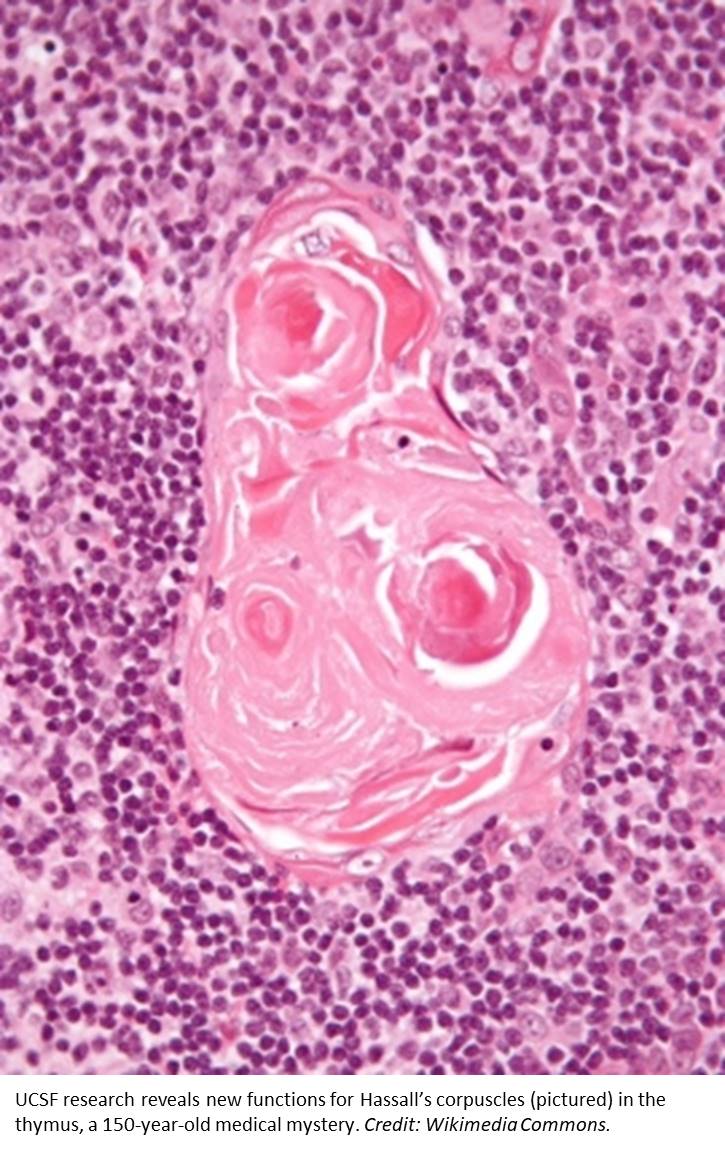 Researchers were recently surprised to discover fully formed gut and skin cells in the thymus, a lemon-sized organ that sits in front of the heart and is responsible for training the T cells of the immune system not to attack the body's own tissues. The finding, based on studies conducted in mice, could lead to better understanding of the drivers of autoimmune problems in humans, the authors say.

The cells in the medulla region of the thymus have a straightforward task: they are programmed to randomly display bouquets of proteins characteristic of various bodily tissues in order to "train" newborn T cells, the immune cells responsible for defending the body against invasive pathogens. If immature T cells respond aggressively to these "friendly" proteins, the thymus either eliminates them or retrains them as peacekeeping Treg ("tee-reg") cells that can suppress inflammation in the body's tissues. Bad quality control in the thymus can lead to autoimmune diseases such as type 1 diabetes, multiple sclerosis, and rheumatoid arthritis.

Now, in a study published in Nature, researchers have discovered that tiny clusters of cells in the thymus called Hassall's corpuscles -- the function of which has been a mystery to science for over 150 years -- consist of much more complex epithelial and sensory cells, akin to mature cells of the skin and the gut. In particular, the scientists discovered that Hassall's corpuscles are surrounded by tuft cells, a type of sensory cell native to the gut which detect invasive parasites in the mouse gut by "tasting" them through chemical detectors on the finger-like cilia that make up the cells' characteristic tufts.

In the new study, the team was interested in learning whether there might be multiple types of thymus cell involved in T cell training. The researchers developed a new technique for tracing the genetic development of thousands of individual AIRE expressing cells, and to their surprise, they discovered two subsets of cells that consistently turned off AIRE and began expressing two very different genetic programs. One group of cells appeared to differentiate into epithelial cells akin to those that form the outer layer of the skin and the other group began expressing markers of a type of sensory cell residing in the gut called "tuft" cells.

The researchers showed in imaging experiments that the skin-like cells and tuft cells clump together to form Hassall's corpuscles. Though these thymic tuft cells looked just like their counterparts in the gut, molecular analyses showed that they express special proteins needed to present "self" molecules to T cells, indicating that they likely play a part in the thymus' immune curriculum.

To test the functional importance of these thymic tuft cells for a healthy immune response, the researchers genetically engineered a group of mice to lack all tuft cells, then transplanted these animals' thymuses into so-called "nude mice," which lack a thymus. The transplanted thymuses began training T cells in these animals for the first time, but without the benefit of thymic tuft cells, the researchers could easily stimulate them to generate an autoimmune response against the native tuft cells of the nude mouse gut.

This elegant experiment demonstrated that thymic tuft cells play a key role in preventing autoimmunity in the gut, though further experiments are needed to clarify exactly how they contribute to T cell education. "Since the skin and the gut are two of the places where your tissues are directly exposed to the outside world, we hypothesize that Hassall's corpuscles and the surrounding tuft cells may be a second level of training that essentially simulates these critical environments for maturing T cells to test how they respond," senior author said.

In a study published in earlier in Cell, the team showed how tuft cells in the guts of mice sense parasitic protozoans using the same molecular pathway that our taste buds use to detect sweet and bitter flavors, which depends on a molecule called TRPM5. Intriguingly, thymic tuft cells also depend on TRPM5, suggesting that they also actively respond to molecular cues through a taste-like pathway.