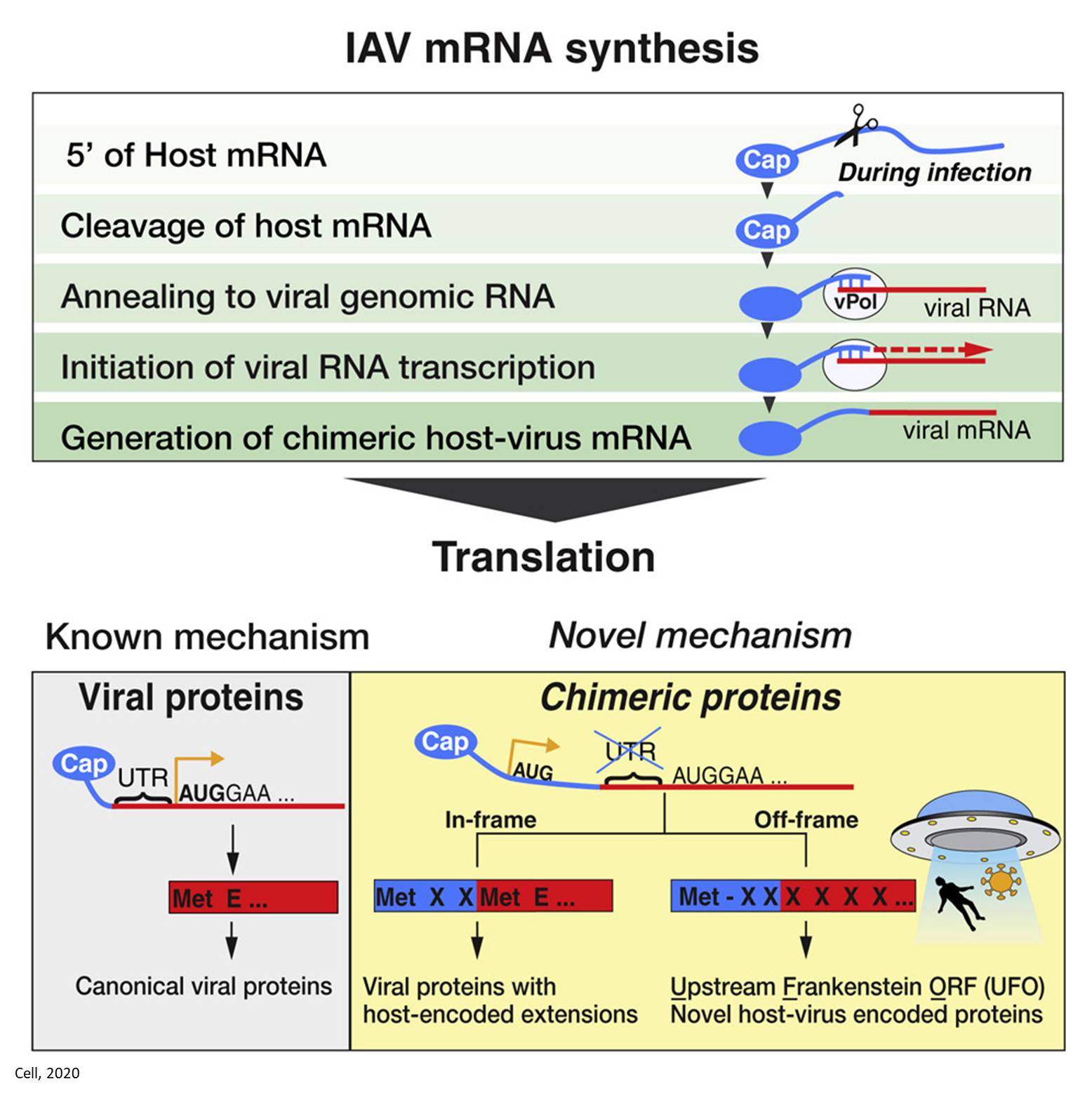 A virus infects a host and converts it into a factory for making more copies of itself. Now researchers have shown that a large group of viruses, including the influenza viruses and other serious pathogens, steal genetic signals from their hosts to expand their own genomes.This finding is presented in a study published in print in Cell.

The cross-disciplinary team of virologists looked at a large group of viruses known as segmented negative-strand RNA viruses (sNSVs), which include widespread and serious pathogens of humans, domesticated animals and plants, including the influenza viruses and Lassa virus (the cause of Lassa fever). They showed that, by stealing genetic signals from their hosts, viruses can produce a wealth of previously undetected proteins. The researchers labeled them as UFO (Upstream Frankenstein Open reading frame) proteins, as they are encoded by stitching together the host and viral sequences. There was no knowledge of the existence of these kinds of proteins prior to this study.

These UFO proteins can alter the course of viral infection and could be exploited for vaccine purposes.

"The capacity of a pathogen to overcome host barriers and establish infection is based on the expression of pathogen-derived proteins," said the corresponding author on the study. "To understand how a pathogen antagonizes the host and establishes infection, we need to have a clear understanding of what proteins a pathogen encodes, how they function, and the manner in which they contribute to virulence."

Viruses cannot build their own proteins, so they need to feed suitable instructions to the machinery that builds proteins in their host's cells. Viruses are known to do this through a process called "cap-snatching," in which they cut the end from one of the cell's own protein-encoding messages (a messenger RNA, or mRNA) and then extend that sequence with a copy of one of their own genes. This gives a hybrid message to be read.

"For decades we thought that by the time the body encounters the signal to start translating that message into protein (a 'start codon') it is reading a message provided to it solely by the virus. Our work shows that the host sequence is not silent," said the author.

The researchers show that, because they make hybrids of host mRNAs with their own genes, viruses (sNSVs) can produce messages with extra, host-derived start codons, a process they called "start snatching." This makes it possible to translate previously unsuspected proteins from the hybrid host-virus sequences. They further show that these novel genes are expressed by influenza viruses and potentially a vast number of other viruses. The product of these hybrid genes can be visible to the immune system, and they can modulate virulence. Further studies are needed to understand this new class of proteins and what the implications are of their pervasive expression by many of the RNA viruses that cause epidemics and pandemics.

Another author said, "Viruses take over their host at the molecular level, and this work identifies a new way in which some viruses can wring every last bit of potential out of the molecular machinery they are exploiting. While the work done here focusses on influenza viruses, it implies that a huge number of viral species can make previously unsuspected genes."

Researchers say the next part of their work is to understand the distinct roles the unsuspected genes play. "Now we know they exist, we can study them and use the knowledge to help disease eradication," said the senior author. "A large global effort is required to stop viral epidemics and pandemics, and these new insights may lead to identifying novel ways to stop infection."
https://www.mountsinai.org/about/newsroom/2020/viruses-can-steal-our-genetic-code-to-create-new-human-virus-genes-pr