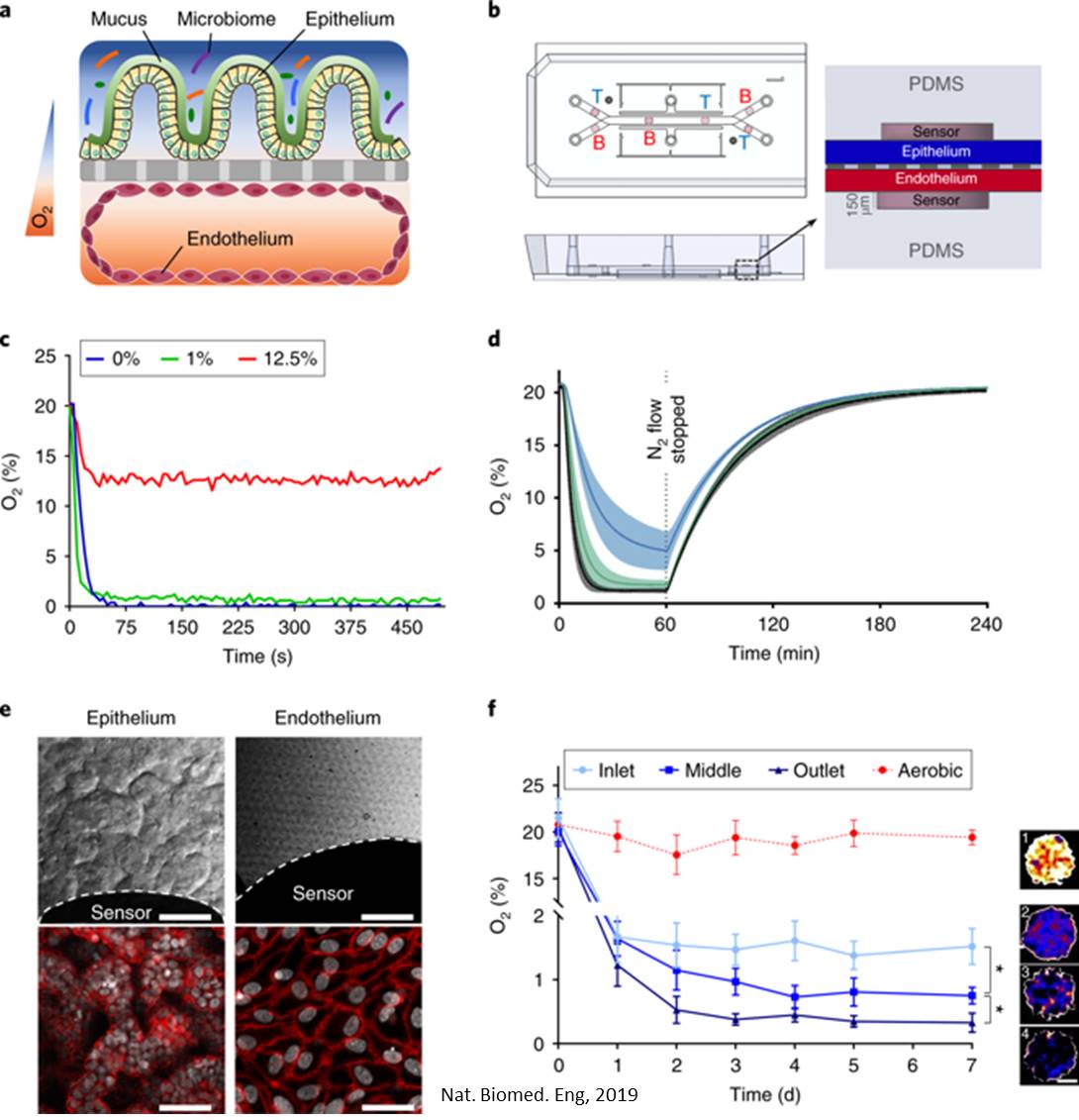 The human microbiome, the huge collection of microbes that live inside and on our body, profoundly affects human health and disease. The human gut flora in particular, which harbor the densest number of microbes, not only break down nutrients and release molecules important for our survival but are also key players in the development of many diseases including infections, inflammatory bowel diseases, cancer, metabolic diseases, autoimmune diseases, and neuropsychiatric disorders.

Most of what we know about human-microbiome interactions is based on correlational studies between disease state and bacterial DNA contained in stool samples using genomic or metagenomic analysis. This is because studying direct interactions between the microbiome and intestinal tissue outside the human body represents a formidable challenge, in large part because even commensal bacteria tend to overgrow and kill human cells within a day when grown on culture dishes. Many of the commensal microbes in the intestine are also anaerobic, and so they require very low oxygen conditions to grow which can injure human cells.

A research team has developed a solution to this problem using 'organ-on-a-chip' (Organ Chip) microfluidic culture technology. The team is now able to culture a stable complex human microbiome in direct contact with a vascularized human intestinal epithelium for at least 5 days in a human Intestine Chip in which an oxygen gradient is established that provides high levels to the endothelium and epithelium while maintaining hypoxic conditions in the intestinal lumen inhabited by the commensal bacteria. Their "anaerobic Intestine Chip" stably maintained a microbial diversity similar to that in human feces over days and a protective physiological barrier that was formed by human intestinal tissue. The study is published in Nature Biomedical Engineering.

For their anaerobic Intestine Chip, the team leveraged its proven Intestine Chip containing two parallel microchannels separated by a porous membrane. They grew human intestinal epithelial cells on the top of the membrane in the upper channel and vascular endothelial cells from intestinal microvessels on the opposite side of the membrane in the lower channel. The intestinal cells used to line these Intestine Chips were either from a cell line or were obtained from human ileum biopsies and expanded through an intermediate organoid step in which they formed tiny, spherical intestinal tissue structures, which were broken up into fragments before being cultured in the chip.

To accommodate a complete microbiome, the team placed the Intestine Chips into a custom-engineered anaerobic chamber, that allowed them to drastically lower oxygen concentrations in the upper intestinal epithelial channel, while maintaining the lower endothelial channel at normal oxygen concentrations. "We generated an oxygen gradient across the two channels that still allows the intestinal epithelium to be supported with oxygen diffusing through the porous membrane," said co-first author. "In addition, we fitted the Intestine Chips with optical sensors that can report local oxygen concentrations in both channels in real-time without disturbing the oxygen gradient."

Complex gut microbiome samples either obtained from healthy human stool and stably cultured in germ-free (gnotobiotic) mice or freshly isolated from infant stool, were then injected into the upper epithelial channel, where they came into direct contact with the mucus layer naturally secreted by the underlying intestinal epithelium. More importantly, the diversity of the commensal bacterial populations, when grown under these low-oxygen conditions, maintained the richness observed in human intestine. "We showed through genome analysis we could culture over 200 distinct groups of bacteria for several days with abundances and ratios of obligate anaerobic bacteria similar to those observed in human stool," said the author. "Importantly, the complete microbiome further enhanced the barrier function of the intestinal epithelium with its cells providing a tight seal and producing a protective mucus layer, which is an important prerequisite for intestinal health."

Being able to look at composition and changes of complete human microbiomes in direct contact with human intestinal tissue in vitro and over days opens up opportunities for personalized medicine and drug testing. "We can culture region-specific intestinal tissue and microbiomes from the same individual to find associations that cause sensitivity or tolerance to specific pathogenic, inflammatory, and systemic diseases," said co-first author. "With the anaerobic Intestine Chip, we can also test the direct effects of drugs on the human microbiome before giving them to people."