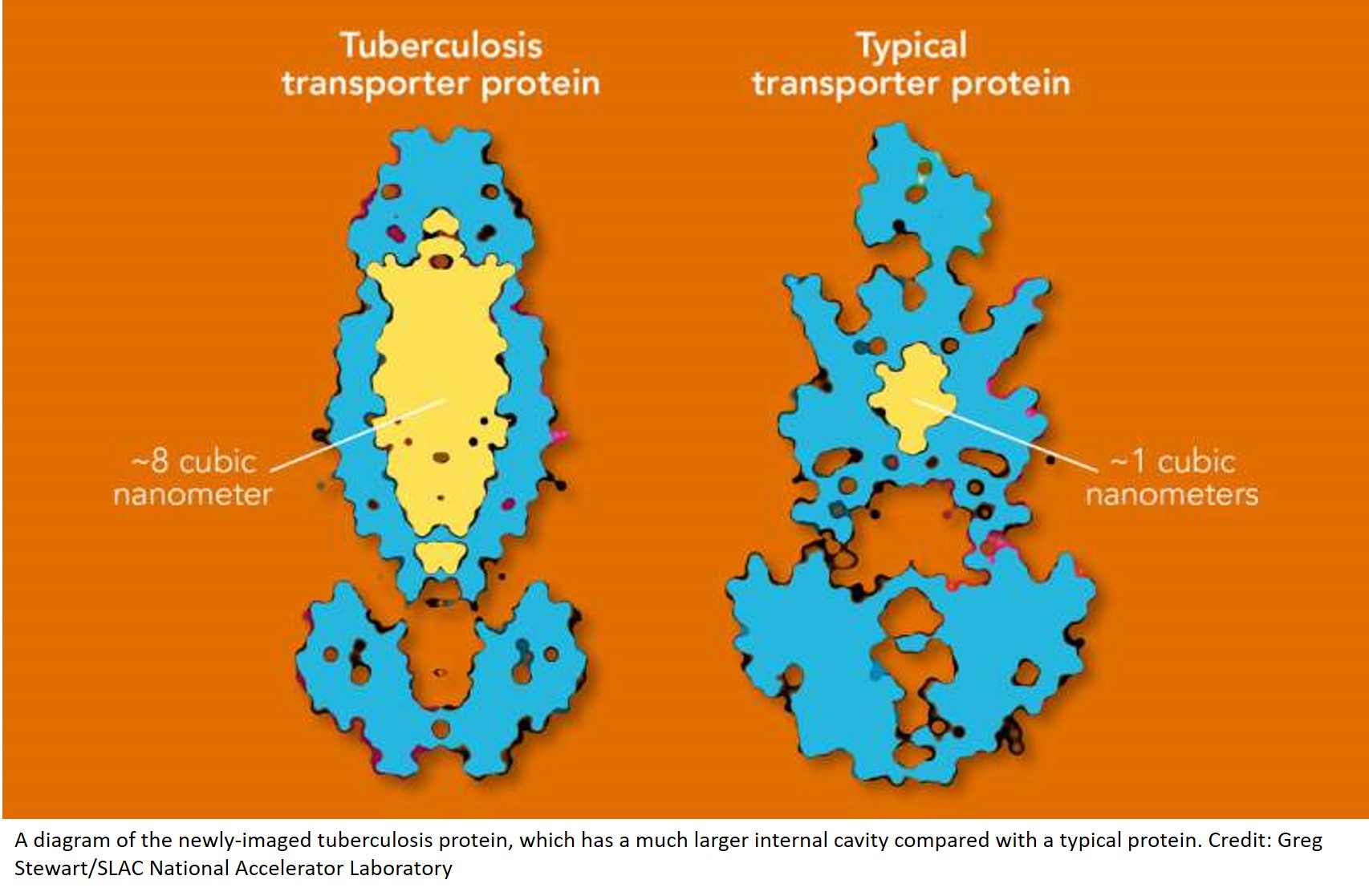 A transport protein that is used by the human pathogen Mycobacterium tuberculosis to import vitamin B12 turns out to be very different from other transport proteins. It contains a huge water-filled cavity, in which hydrophilic substances are transported across the cell membrane. This discovery, which changes our understanding of bacterial physiology, was made by imaging the transport protein using cryo-electron microscopy. The results were published in the journal Nature.

The tuberculosis bacterium has all the genes required to produce vitamin B12 but, for some reason, it still needs to import this vitamin for successful cell division. To do so, it uses a transport protein that is part of a large family of ATP-binding cassette (ABC) transporters. Interestingly, the vitamin B12 transporter is also implicated in the transport of antimicrobial peptides such as bleomycin. 'And it is very odd to have a single transporter for two very different types of molecules,' says the senior author.

The team set out to elucidate the protein structure of the enigmatic transporter. The structure revealed a major surprise: a water-filled cavity that spans the entire cell membrane, measuring a massive 7,700 cubic Angstrom. 'That is as big as seven vitamin B12 molecules.'

This cavity appears to simply transport water together with any substances that might be in it. 'You could compare it with a sluice,' explains the author. 'You let the water in and everything that is in it.' It does explain why the transporter can handle both antibiotic peptides and vitamin B12. Since it is non-selective, it must be an inefficient transport system. This does not matter for the uptake of vitamin B12 by Mycobacterium tuberculosis, as the cells only need to take up very few of these molecules during their reproductive cycle, which lasts around 24 hours.

The non-selective transport system is totally different from known transporters. 'As such, it changes the way that we look at the physiology of bacteria. There are strong indications that other bacterial species have a similar system, which means that they pick up random molecules from their environment.' It also offers an interesting perspective on the treatment of tuberculosis: 'If we could stimulate the activity of this transporter, it might import antibiotics more efficiently, making it easier to kill these cells. We realize, though, that this may not be straightforward, as the bacterium uses effective strategies to keep antibiotics out.'

The next step is to find out how the transporter works. 'We expect that inside the cell, the sluice is emptied by binding and hydrolysing ATP. But we do not know how it opens on the outside, to let new molecules in.' The transport protein is a dimer and the two halves appear to protrude on the outside - where they may somehow open up to let fresh cargo in. 'Maybe we can find a way to loosen this cap and let more antibiotics in.'

There is also a distinct possibility that a similar sluice-type transporter is present in human cells, says the author. In our intestines, vitamin B12 is first bound to a peptide called intrinsic factor and then taken up by epithelial cells. 'It ends up in lysosomes, vesicles full of enzymes, where the intrinsic factor is degraded. Next, the vitamin B12 is released from the lysosome into the cells. I strongly suspect that this involves a similar non-specific transporter.'