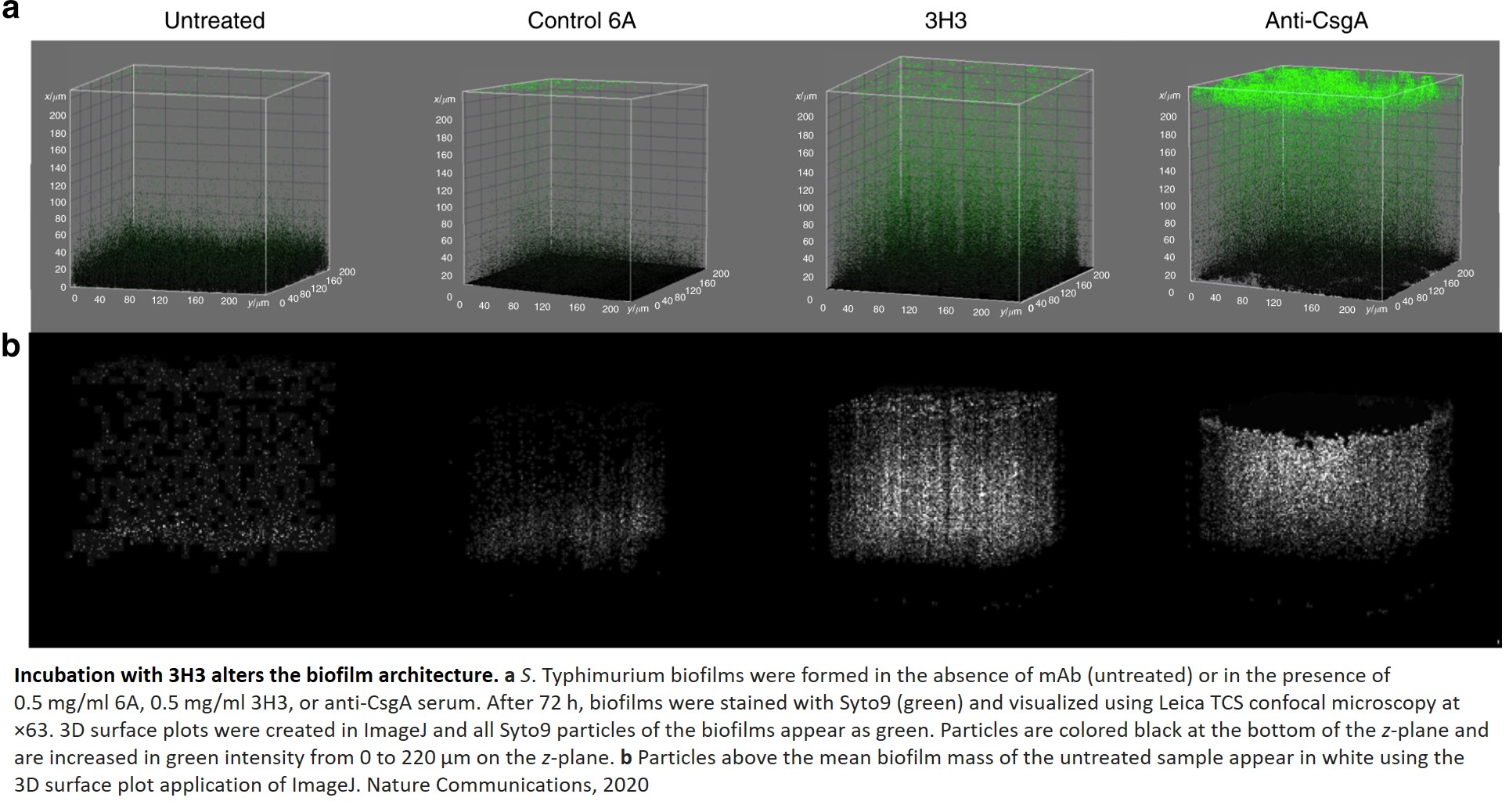 Communities of bacteria known as biofilms are notorious for forming on implanted medical devices, such as catheters and prosthetics, and on tissues in the body, where they give rise to chronic and sometimes life-threatening infections in patients. Biofilms are extremely difficult to eradicate, because, united with an impermeable matrix, the microbes are able to resist antibiotics and other agents that would otherwise eliminate them.

The new molecule, a type of monoclonal antibody, however, is able to open up these biofilms, causing their dissociation. It is the first agent of its kind to show promise as an immunotherapeutic strategy to fight off infectious biofilms.

"With this new antibody, we open the door for better treatment strategies for patients who suffer from chronic infections associated with implanted medical devices or who suffer from recurrent infections, such as repeated infections of the urinary tract," explained the senior author on the new study.

The study was published in the journal Nature Communications.

The new antibody, named 3H3, was isolated from a healthy human subject. The authors were intrigued by 3H3's ability to attach to beta-amyloid, a sticky protein that functions abnormally in Alzheimer's disease. A form of amyloid called curli is secreted by bacterial cells and is a major component of biofilms. Bacterial amyloid curli acts like glue, enabling bacterial cells to adhere to one another and form a continuous film over a surface.

In experiments with biofilms of infectious Salmonella enterica serovar Typhimurium, which forms biofilms in the human intestinal tract and on medical devices, the team found that amyloid binding by 3H3 disrupted biofilm formation, causing the separation of bacterial cells within the biofilm. The researchers then tested the antibody in mice infected with catheter-associated S. Typhimurium biofilm. In these animals, 3H3 injections also led to biofilm dissociation and, when followed by antibiotic therapy, allowed for the swift eradication of individual bacterial cells from the animals.

There are currently no existing therapies that are used clinically to break up biofilms. Here the team showed that while 3H3 breaks the biofilm, it also prevented the dissociating bacteria from entering the circulation, where they could cause sepsis. 3H3 was found to bind to individual bacterial cells facilitating their uptake by immune cells. Therefore, this novel approach has the potential to reduce the risk of sepsis.

"We are very excited about these findings," the senior author said. "There is great need for an immunotherapy that can be used alongside lower dose antibiotics or other antimicrobials to safely and effectively eradicate biofilms in infectious settings."

The authors plan next to test 3H3 on a wide variety of biofilms. As many important pathogenic bacteria produce curli or curli-like amyloids in their biofilms, such as Escherichia coli, Staphylococcus aureus and Pseudomonas aeruginosa, this novel immunotherapy has the potential to be applied to a wide variety of infections.