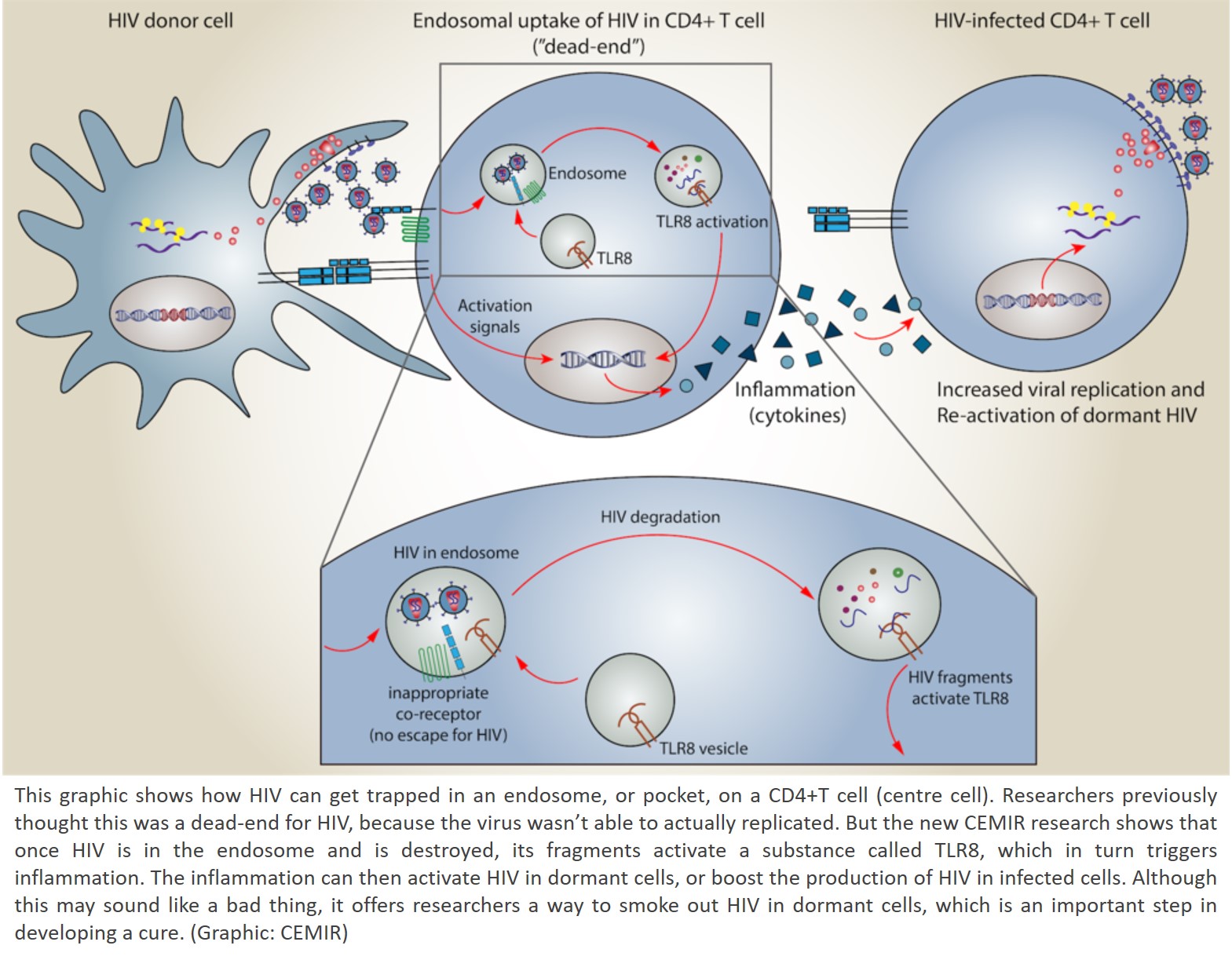 Ever since antiretroviral treatments against HIV infection were introduced in 1996, scientists have eagerly been hunting for a cure for the disease.

Although drugs can allow people infected with HIV to live normal, healthy lives, people infected by HIV have to take antiretroviral treatments for as long as they live. Little bits of virus can lie dormant in immune cells for years, so that if patients stop taking the drugs, the dormant virus can come out of hiding and re-infect the patient
.
And now, as the first people to start taking this treatment are entering middle or old age, doctors are seeing side effects from inflammation that are caused by having even tiny amounts of HIV in your blood. That's yet another reason for developing a cure for the disease.

Now, researchers have uncovered a previously unknown way in which the body's immune system can detect and respond to HIV infection -- which could help improve the chances of developing a cure.

Their results have been published in Nature Communications.

To understand exactly what the researchers did requires a refresher course in how HIV actually works inside the body and how the body responds.

When the virus gets into the body, it infects the very cells that the body would use to combat it -- these are called CD4 T helper cells, or CD4 T cells.

Once the T cells are infected, they can't do their part in helping protect the body from other diseases or infections. That's why the illness that people get from HIV infection is called Acquired Immune Deficiency Syndrome, or AIDS.

Someone with full-blown AIDS would have almost no T cells, and they could die of any number of different infections or diseases that wouldn't normally afflict someone with a healthy immune system.

"Today we have treatments that can stop HIV from replicating itself, and the T helper cells can come back," said a co-first author of the article. "You can live a perfectly healthy life, but you have to take medicine your whole life, because the day you stop treating it, the virus will come back."

The virus comes back if antiretroviral therapy is stopped because HIV hides its genetic material inside T cells that are dormant. That means there's always the potential for more virus to appear and wreak havoc.

These reservoirs of virus have spurred a worldwide hunt for ways to shock, or kick the virus out of the cells where it lies dormant.

If the virus that lies dormant in cells could be smoked out into the open, the formally dormant virus could then be killed by the body's immune system or drugs, and that would leave the patient HIV free, and cured, the author said.

"We need to activate the virus so it can start replicating, and that will make the cell visible to the immune system," the author said. "That is the current idea for a cure. We just need to activate cells that are hiding away so we can kill them, while we give medicine that protects cells from infection, because there will be more virus produced."

One such clinical trial in the UK, called the RIVER study, tried this approach but reported last year that the trial did not succeed, the author said.

HIV comes in different varieties, and not all varieties are equally able to infect all T helper cells. To infect a cell, the virus has to have a specific ligand, which functions like a key, that has to match up on the target cell with the right kind of receptor, or keyhole.

When a T helper cell doesn't have the receptor that matches the ligand on the HIV virus trying to infect the cell, that means the virus can't actively infect that T cell. Instead, the virus can get trapped in a vesicle in the cell called an endosome.

The researchers decided to look at what happened with uninfected T helper cells that had trapped HIV in endosomes. The uninfected cell responds to the HIV in the endosome by destroying the contents of the endosome, the author said.

What the researchers found was when the endosome destroys the HIV, some of the genetic material is exposed to the T cell, which in turn activates a type of molecule called TLR8. This in turn results in the production of substances called cytokines, which cause inflammation in the body.

One reason this is surprising is that T cells are part of our immune system called the "adaptive" immune system, which responds to specific infectious substances over time.

Our immune system also has an "innate" part, which we are born with, and which provides more general immune protection by recognizing and responding to bits of viruses or bacteria that are common across many different viruses or bacteria.

"In this study we show that a receptor associated with the innate system actually exists and functions in the adaptive immune system," the author said.

he inflammation caused by the cytokines helps to wake up T cells that had formally been dormant and that contain HIV genetic material, said the other co-first author of the study.

"The T cell detects the virus and produces cytokines, and these cytokines act on cells that are properly infected with HIV and makes them produce more virus. The dormant T helper cells produce virus, and the T cells that were actively producing virus will produce more of it," the author said.

In other words, the TLR8 signal and cytokine-induced inflammation shock the HIV out of the dormant cells -- where it can be destroyed.

The destruction of HIV by endosomes and the associated inflammation may also be one reason why patients who have been on antiretroviral treatments for decades are now beginning to develop inflammatory diseases more commonly associated with people decades older.

These include dementia, cardiovascular diseases, metabolic syndrome and cancers that aren't related to HIV.

The author said that the mechanism where endosomes destroy HIV might release enough genetic material to trigger the T cell's innate immune receptors to cause inflammation.