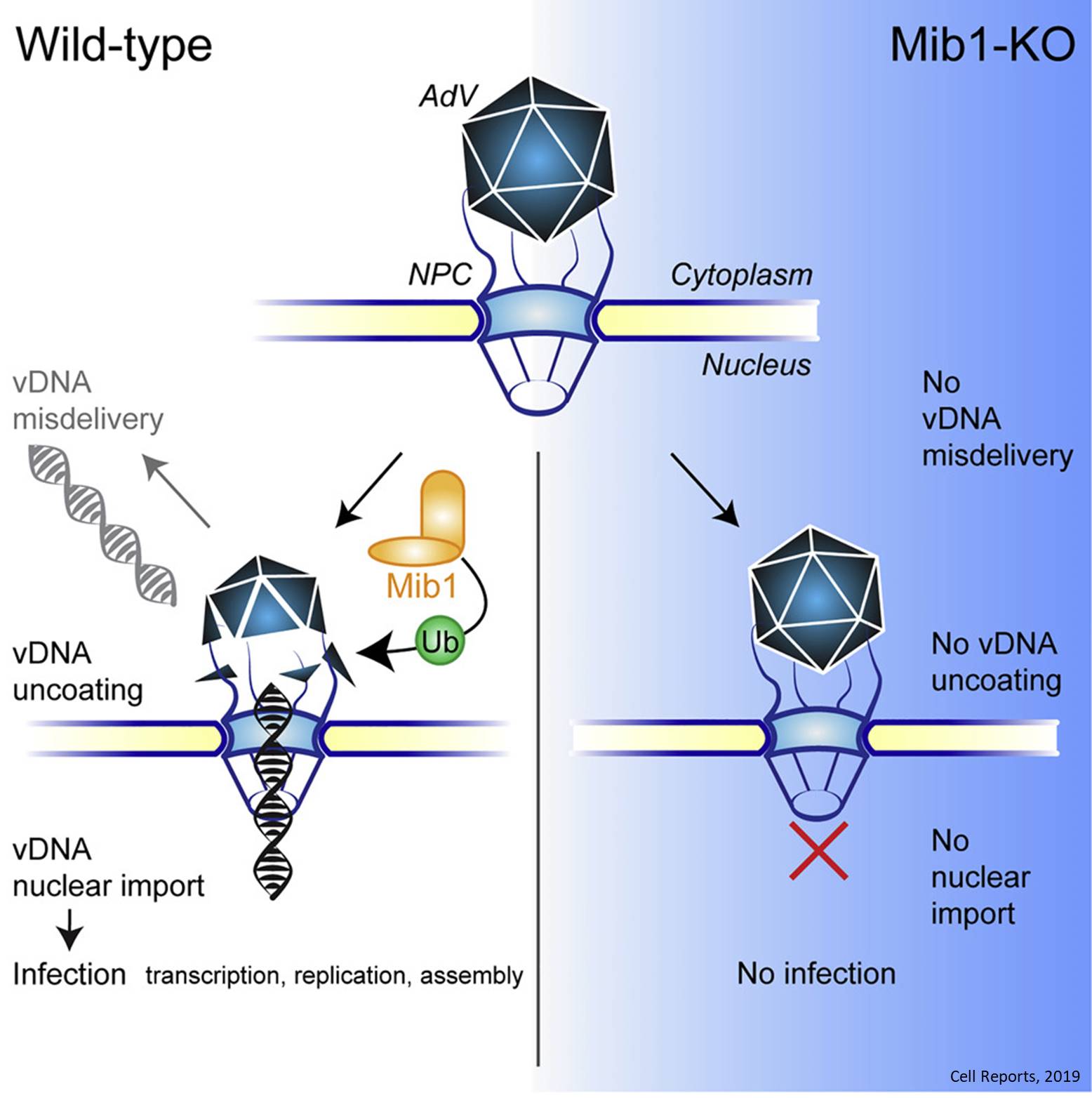 Viruses have been part of animals and humans for eons. When viruses invade a cell, they can infiltrate the nucleus with their genome and become part of the genome of the infected organism. Viruses transfer their genes between various organisms, as well as between tissues containing well differentiated cells inside a living creature. But how they uncoat their well-packed genes and release them to cause infection is largely unknown.

A research group has now for the first time identified a protein in human cells that is key for successful viral DNA uncoating: the ubiquitin-ligase Mind bomb 1 (Mib1). "The protein enables adenoviruses to uncoat their DNA and discharge it into the nucleus - which is necessary for successful infection," says the senior author. If the protein is not produced or fails to work properly, the viruses can penetrate into the cell and reach the nuclear membrane, but they remain stuck on the porous structures of the nuclear envelope. "This finding opens up a new possibility for developing anti-viral therapies that block Mib1 in well differentiated cells," says the author. At present, there are no effective drugs to combat these widespread viruses.

Researchers found the protein by switching off most of the genes in human cells of the lung epithelium using RNA interference one by one, and then testing whether adenoviruses could infect the cells. "When we inhibited the gene for Mib1 or knocked it out using CRISPR-Cas technology, the virus infection rate declined drastically. Practically all adenoviruses remained stuck at the pore structures outside of the nucleus," says the senior author. As soon as these cells, after genetic interventions, produced small amounts of Mib1 again, the Mib1 reached the viruses at the nuclear pores, and the viruses uncoated their genes and infected the cells.

Adenoviruses are widespread in humans and many animals. In humans, they can cause infections in the respiratory system and the gastrointestinal tract, as well as the kidney, liver, eyes and blood cells. For healthy people, the viruses are not life-threatening - the viruses simply settle in immune cells, where they remain for months without damaging the cells or tissue. In a person with a weakened immune system, however - for example stem-cell or organ transplant recipients - adenoviruses can easily spread to other cells and become life-threatening.